The short-lived thaw of 1997, when Mohammed Khatami was elected president, failed to lastingly melt the ice. While Khatami was busy advocating for a "dialogue among civilisations" on the world political stage, something extremely dangerous was going on in secret that would trigger the global sanctions that are still in effect against Iran today. In 2002, it became known that Tehran's rulers were operating two nuclear facilities, a uranium enrichment plant in Natanz and a heavy water reactor in Arak. Iran was apparently on its way to producing nuclear weapons.

The situation became critical when the International Atomic Energy Agency (IAEA) found traces of enriched uranium in Natanz in late summer 2003. The agency later reported that Iran had kept its nuclear programme a secret for 18 years. Since then, uranium enrichment in Iran's nuclear facilities and international sanctions have both continued apace, through at different speeds.

There are numerous different sets of sanctions: UN sanctions that are binding on all nations of the world, sanctions imposed by national governments that have their own special problems with Tehran, and finally the U.S. sanctions, which are comprehensive, universal and particularly painful for Tehran's rulers. The story behind these sanctions often reads like a thriller. 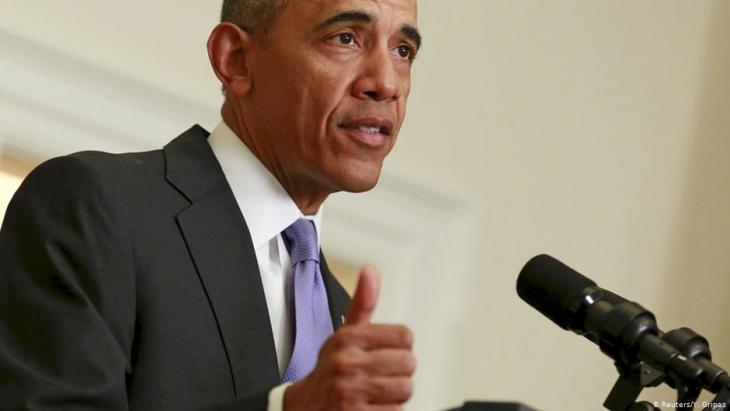 “Crippling sanctions”: though generally associated with the globally acclaimed nuclear agreement, it was under Barack Obama that the toughest sanctions of all were imposed on Iran. Secretary of state Hillary Clinton was supported in her hardline approach by diplomat Dennis Ross, a hawk in charge of the Iran dossier. Known in Washington for being an Israel lobbyist, it was Ross who proposed sanctioning Iranian companies believed to have links to the country's largest bank, Bank Melli

Since its inception the Islamic Republic has seen seven U.S. presidents come and go, from Jimmy Carter to Donald Trump. These have been men of widely varying characters and political leanings in domestic and foreign policy.

And yet, for all their political differences, U.S. policy has remained consistent all these years as regards sanctions against Iran. Sanctions began with Reagan and spiralled as each of his successors set his own emphasis. There was a brief pause only during the years 1990 and 1991 when "the end of history" was celebrated after the collapse of the Soviet Union. During this historic period President George Bush Sr. was busy with more important things than sanctions against Iran.
His successor, Bill Clinton, however, continued to ramp them up. Citing Iran's support for terrorists and pursuit of weapons of mass destruction, he imposed a comprehensive trade embargo on the country in 1995. George Bush Jr. took things a step further and declared the Islamic Republic an "axis of evil", even verging on declaring war.
The Obama contradiction
Finally there came a ray of hope with Barack Obama. His presidency is widely seen as an era of detente and rapprochement with Iran, as Obama is associated in this context mainly with the globally acclaimed nuclear agreement. And yet, as strange as it may sound: it was during the Obama years that the toughest sanctions of all were imposed on Iran. Although when he first took office Obama had spoken out in favour of a "constructive new beginning" with Iran, his secretary of state, Hillary Clinton, was an advocate of so-called "crippling sanctions" of the type hardliners usually called for.
While Obama was secretly seeking a solution to the problem of Iran's nuclear agenda, he put diplomat Dennis Ross, a hawk, in charge of the Iran dossier. Ross was known in Washington as a lobbyist for Israel. Under Bill Clinton he had been chief negotiator for the Middle East and even at that time special envoy for Iran. It was Ross who proposed sanctioning Iranian companies that were believed to have links to the country's largest bank, Bank Melli. Further sanctions would follow.
At the end of October 2009, the U.S. Congress passed a hitherto unprecedented tightening of sanctions. The aim was to bring oil exports, Iran's main source of income, to a complete halt. The USA threatened all foreign financial institutions that conducted business with the Central Bank of Iran or other Iranian financial institutions on U.S. lists with the loss of their bank accounts in the United States.
This also affected all foreign central banks if they wished to channel their oil deals through the Central Bank of Iran. Other nations besides the USA were thus forced to stop buying oil from Iran. The measures likewise penalised all companies that exported petrol to Iran, or were involved in the development of Iran's ailing oil industry.
In 2010, sanctions relating to human rights violations were then imposed for the first time on leading members of the Iranian regime, and in 2011 it was the turn of the petrochemical industry, which is another important source of revenue for the country.
In February 2013, sanctions were imposed on Iranian state broadcasters and those responsible for them, on the grounds that they were censoring the Iranian opposition. All of these sanctions remained in force even after the nuclear agreement was put in place. President Trump inherited and further expanded on them.

"Biden should take a clear stand — with Germany, France and Britain — that there will be no new negotiations until nationals of these countries held hostage in #Iran are set free and the Islamic Republic quits this savage practice," writes @jrezaian. https://t.co/WWEwx1QaPC

Trump plugged the last holes – and what will Biden do?

After Donald Trump announced the U.S. withdrawal from the nuclear agreement in May 2018, he set about plugging the last remaining holes through which the Islamic Republic could evade sanctions. In late April 2019, he suspended the waivers that allowed some countries to make oil deals with Iran for six months. The aim was to cut Iran off from the five main purchasers of its oil – China, India, Japan, South Korea and Turkey. And that goal was achieved.

Iran is currently no longer exporting oil in an amount worthy of mention. At six to seven million barrels per day, the country was once the world's second largest oil exporter. Today, the country sells about 750,000 barrels a day indirectly or through the black market, but even those sales have to take place without normal banking transactions, which means the deals often involve bartering oil in exchange for goods.

When and under what conditions U.S. President Joe Biden will return to the nuclear agreement is uncertain. What we do know for sure is that even under Biden almost all sanctions will remain in place for the time being. This is because Biden would need the approval of the U.S. Congress for their repeal. And there are plenty of members of Congress who oppose loosening Iran's shackles – including many Democrats.

Reassessing the Islamic Republic: Did the Iranian revolution deliver?

U.S. sanctions against Iran: The lonely "axis of evil"

Nader Hashemi on the protests in Iran: Violence "reflects the Iranian regime's desperation"

Philosopher Juergen Habermas was due to be awarded a major Arab prize in Abu Dhabi, but has turned it down following criticism. This decision torpedoes Arab efforts at a ... END_OF_DOCUMENT_TOKEN_TO_BE_REPLACED

Although a unity government was formed in Libya in March 2021, tensions and possible crises between the political actors are already emerging. What problems does the country face ... END_OF_DOCUMENT_TOKEN_TO_BE_REPLACED

Among Muslims, the image of women as "cossetted hijab-wearing princesses" is frequently invoked. But Muslim women have long wanted to be more. In her essay, Karoline Roscher- ... END_OF_DOCUMENT_TOKEN_TO_BE_REPLACED

Even in times of war and pandemic, refugees are still being deported to Afghanistan. Several deportation flights have taken place in recent weeks alone. Since those affected often ... END_OF_DOCUMENT_TOKEN_TO_BE_REPLACED

Surging coronavirus cases in many parts of the world have overshadowed the start of this year's Muslim holy month of Ramadan, with festivities once again curtailed by contagion ... END_OF_DOCUMENT_TOKEN_TO_BE_REPLACED

German Middle East analyst Guido Steinberg and television journalist Ulrich Tilgner have both published new books on the conflicts in the Middle East. Their analyses and their ... END_OF_DOCUMENT_TOKEN_TO_BE_REPLACED
Author:
Ali Sadrzadeh
Date:
Mail:
Send via mail

END_OF_DOCUMENT_TOKEN_TO_BE_REPLACED
Social media
and networks
Subscribe to our
newsletter