China also provides the GCC states with a strategic opportunity to hedge their bets between the two superpowers. Xi’s visit was an important moment in Saudi Arabia’s emergence as a more dynamic player on the global stage, as well as a significant test of Saudi Arabia’s ability to balance its ambitions and other interests with the imperative of maintaining its paramount security relationship with the United States.

The parties also included references in their joint declarations to sensitive regional issues such as the Iranian nuclear programme, the Syrian crisis, the Israel-Palestine peace process, and the Iran-UAE islands dispute, which provoked a backlash from Iran. 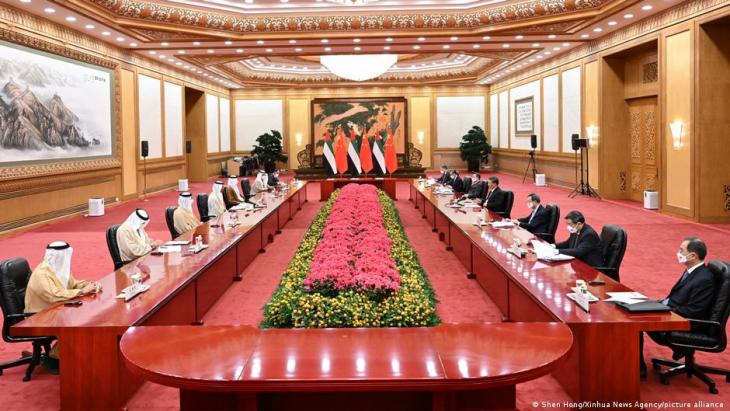 A multipolar world: the United States described Xi’s attempt to expand Chinese influence in the Gulf as “not conducive to maintaining international order” and the Americans saw the visit as a sign that Riyadh was abandoning its traditional relationship with Washington and pivoting towards Beijing. And yet, Saudi Arabia and its Gulf partners are not looking to replace the decades-long friendship with Washington. They are simply to current geopolitical realities by diversifying their relations

China and Saudi Arabia in particular agreed to upgrade their bilateral relations to a “comprehensive strategic cooperative partnership” following the UAE, Iran, Egypt and Algeria, as well as deciding to hold leaders’ meetings biannually. Saudi Arabia’s closer ties with China suggest greater prospects for China-Arab relations in the future. Yet some Arab states were concerned with the 25-year strategic cooperation agreement between Iran and China, which was signed in March 2021.

The Saudis and Emiratis are hoping to use closer ties with China to offset Iranian influence with Beijing as the Chinese begin to extend their economic and strategic influence in the Gulf. Saudi Arabia has been expressing a keen interest in joining the BRI, and “harmonising” it with Riyadh’s own Vision 2030 development plans.

Xi also proposed five major areas for cooperation between China and the GCC countries in the next three to five years, including energy, finance and investment, innovation and new technologies, aerospace, language and cultures. Xi said his country welcomed the participation of the GCC in the Global Security Initiative he proposed earlier this year, which is seen as a challenge to U.S. influence in the region.

As a further sign of how the Saudis are rebalancing relations, the kingdom has been sending strong messages that it is considering selling its oil in Chinese yuan or other currencies, in the face of possible U.S. legislation exposing OPEC members to antitrust lawsuits. Saudi anxieties were further compounded in early December when the Group of Seven nations and Australia joined the European Union in adopting a $60-per-barrel price cap on Russian oil, mainly to limit Russia’s ability to fund its war in Ukraine. Oil exporting countries are uneasy with the sanctions mechanism as it could potentially be applied to OPEC countries.

Playing on the potential for differences between oil exporters and Western countries, Xi called for China and the Gulf nations to make full use of the Shanghai Petroleum and National Gas Exchange as a platform to carry out yuan settlements of oil and gas transactions. However, any move by the Saudis and other oil producing states to use the yuan instead of the U.S. dollar for oil transactions would be a bold move that could negatively impact U.S-Saudi relations. That is why it is unlikely to happen soon.

The Chinese Belt and Road Initiative’s Digital Silk Road is pertinent to the current national digital plans in GCC countries and China is also eager to work with Gulf governments to bolster cooperation on 5G and 6G technology for broadband cellular networks. Chinese 5G projects in Saudi Arabia, the UAE, and elsewhere in the region have progressed despite U.S objections and Huawei signed an agreement with Saudi Arabia during Xi’s visit.

The White House has described Xi’s attempt to expand Chinese influence in the Gulf as “not conducive to maintaining international order” and the Americans saw the visit as a sign that Riyadh was abandoning its traditional relationship with Washington and pivoting to Beijing. Nevertheless, Xi’s reference to the “multipolar world” implied that China does not have to challenge the United States in the Middle East to play a larger role with respect to the Arab countries.

China cannot replace the U.S. presence in the Gulf, especially Washington’s security posture in the region, nor is it in any hurry to do so. Saudi Arabia and its Gulf partners are not looking to replace the decades-long friendship with Washington. Yet they feel they have to respond to geopolitical reality by diversifying their relations.

Abdullah Baabood is a non-resident scholar at the Malcolm H. Kerr Carnegie Middle East Center. Baabood holds the chair of the state of Qatar for Islamic area studies and is a visiting professor at the Faculty of International Research and Education at Waseda University in Tokyo.

Nouara may be 65, but she is ready to join thousands of others who burn their ID and pay traffickers for the chance of a new life in Europe. Zineb Bettayeb reports END_OF_DOCUMENT_TOKEN_TO_BE_REPLACED

In Doha, Arabs from Morocco, Tunisia, Egypt and Algeria are gathering to celebrate the first ever FIFA World Cup to be held on Arab soil. The criticism from Europe? Over the top, ... END_OF_DOCUMENT_TOKEN_TO_BE_REPLACED

"Rebel Game: The Power of Football in the Middle East and the Qatar World Cup", an anthology published by Middle East researchers Jan Busse and Rene Wildangel, takes the upcoming ... END_OF_DOCUMENT_TOKEN_TO_BE_REPLACED

After a two-year hiatus, the Arab League re-convened at the beginning of November in Algiers against a backdrop of uncertainty and discord. By Pierre Boussel END_OF_DOCUMENT_TOKEN_TO_BE_REPLACED

The history of Jews and Muslims is far more entangled than you might imagine – but you have to listen out for it. In "Recording History", Christopher Silver takes us on a sonic ... END_OF_DOCUMENT_TOKEN_TO_BE_REPLACED
Author:
Abdullah Baabood
Date:
Mail:
Send via mail

END_OF_DOCUMENT_TOKEN_TO_BE_REPLACED
Social media
and networks
Subscribe to our
newsletter