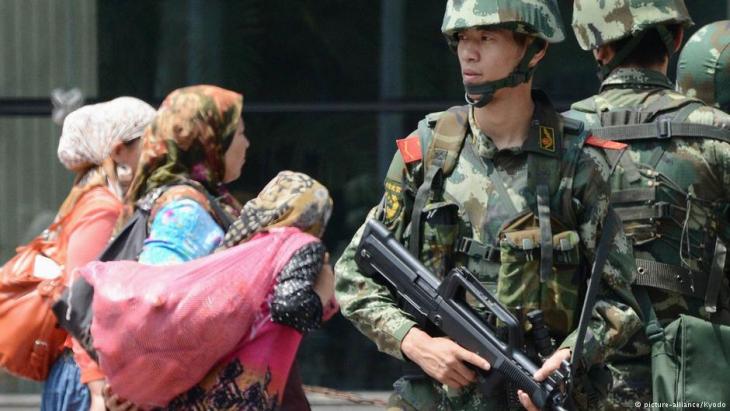 Beijing long denied that Muslims in the Xinjiang region were being interned in re-education camps. Now, however, the government has admitted that thousands of Uighurs are being held there, offering a preposterous justification. By Friederike Boge

For months, the Chinese government denied the existence of re-education camps for Muslims in the Xinjiang region. Now it admits: such camps do exist. And not only that. As part of a coordinated propaganda campaign, the government is claiming that these are exemplary institutions in the international fight against terrorism. Only that China would rather not show them off, i.e. make them accessible to international observers.

According to the new official version, the countless Muslims who have in some cases been held behind walls and barbed wire for one and a half years without a court order are benefitting from a "free vocational training programme". Xinjiang's head of government and deputy party leader Shokrat Zakir praised the "programme" to the skies this week and was the first government representative to comment on it in detail.

This is Beijing's reaction to the charges by human rights activists that up to one million Muslims have been interned in Xinjiang in order to brainwash them and deprive them of their religious and ethnic identity, thus forcibly assimilating them into Chinese majority society.

Zakir, of course, puts it quite differently: "Many of those being re-educated were negatively affected by religious extremist ideology and were under the sway of a 'religious regime' or 'family regime' distorted by extremists. Now many of them have realised that they are first and foremost citizens of the nation." This is how the local government leader, who himself belongs to the Uighur minority, described the programme to the state news agency Xinhua.

Thanks to the training programme, the "trainees" are now in a position to recognise their "mistakes". What exactly these consist of, Zakir doesn't say. He claims that these people have been guilty of "minor crimes in the context of terrorist or extremist activities". According to reports by Human Rights Watch and Amnesty International, however, contacts with friends and relatives abroad or regular prayers are enough to have someone interned.

As further justification for the imposed "education programme" in heavily guarded camps, Zakir cites the lack of language skills of many, mostly Uighur, inhabitants in the south of Xinjiang and their deficient qualifications for the job market. Therefore, he says, in addition to language lessons, there are also courses in textile and food production, electrical engineering, hairdressing and online trade.

Zakir describes the accommodations in the re-education camps as comfortable. The "trainees" receive free meals, which are prepared in cafeterias according to the rules of their religion. The dormitories are equipped with radio, television, air conditioning and showers. There are sport facilities for table tennis and basketball as well as dance and singing competitions. Much attention is also paid to the mental health of the "trainees".

All this stands in dramatic contrast to what has been described by former inmates in the re-education camps as documented by Human Rights Watch and Amnesty International. These accounts tell of overcrowding, harassment and psychological terror. The local head of government of Xinjiang even goes so far as to present the camps as a measure "for the protection of human rights", because these rights are threatened by terrorism.

Zakir failed to explain why the "trainees" are forced to wear camp uniforms, are supervised by armed men during lessons and cannot live at home during their "training". And what he has to say about the length of the "trainees'" stay is revealing. According to the local head of government, many might be able to achieve their training goals by the end of the year and be put to work.

The mass internment campaign has been running since April last year. But so far, little has been heard about any camp inmates being released. Perhaps the Chinese government is now being forced by international pressure to adopt a new approach. In any case, the leaders evidently deem it necessary to replace silence and denial with a justification for the re-education campaign that ties in rhetorically with international de-radicalisation programmes.

In recent weeks, members of the U.S. Congress across party lines have called for sanctions on the basis of the Magnitsky Act against those responsible for the mass internment in Xinjiang. This law permits the confiscation of possessions in America belonging to persons targeted by sanctions. The representatives have cited, among others, Xinjiang's party leader, Chen Quanguo, under whose administration the region has been transformed since 2016 into a police state. The outgoing American ambassador to the UN, Nikki Haley, speaks of "the largest internment of civilians in the world today".

Sanctions are also demanded against Hu Lianhe, who is regarded as the leading ideologist of the new minority policy. He advocates creating stability by "standardising human behaviour". Behind this plan is the conviction that independent minority identities contributed to the decline of the Soviet Union, which is regarded in China as a cautionary scenario. After his only visit to Xinjiang, in 2014, President Xi Jinping himself called for fostering citizens' identification with the Chinese nation and promoting ethnic mixing. He is moreover demanding with increasing fervour a "sinicisation" of all religions in China, which must be brought in line with socialist values.

The founding of the post-Soviet republics in Central Asia in the 1990s encouraged Uighurs in Xinjiang to strive for autonomy as well, which the Chinese authorities fought against with all their might. China justifies its harsh anti-terror campaign with individual terrorist attacks for which the authorities blame Uighur perpetrators. The campaign was intensified significantly after the launch of the New Silk Road initiative, as the planned route runs through Xinjiang on its way to Europe. 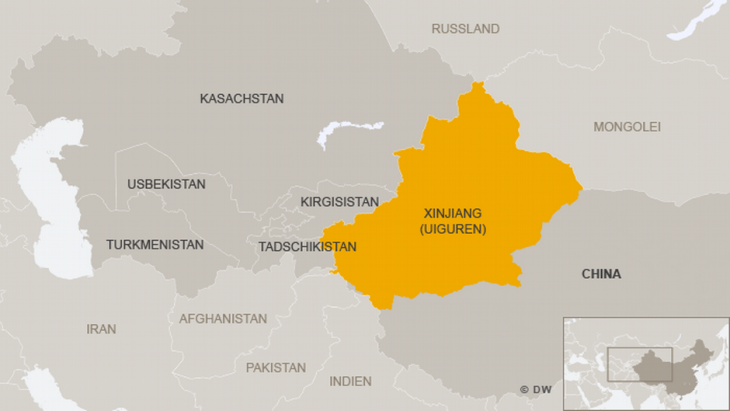 Chinaʹs modern-day adaptation of the Silk Road: the Peopleʹs Republicʹs latest economic initiative forsees a revival and extension of the ancient routes across Central Asia to Europe. The last thing Bejing needs is a rebellious province blocking its path. Hence the repression and forcible assimilation of Xinjiangʹs Uighur Muslim population – naturally for the "greater good"

Criticism of the situation in Xinjiang is also growing in several Islamic countries, among them some of China's major trading partners. Beijing is thus attempting to quell the swelling debate. As a case in point, the Pakistani minister of religion, who had been quoted as voicing critical remarks about the re-education camps, was compelled to retract his comments, claiming he had never said anything of the sort. The Pakistani army chief had previously rushed to Beijing to apologise.

Now, however, the new propaganda campaign on the alleged educational offensive in Xinjiang suggests that Beijing has recognised that such methods alone are no longer sufficient. Zakir's statements to the Xinhua news agency were accompanied by detailed reports on the state television channel CCTV and in the party newspaper "Global Times". The date chosen for publication may have something to do with the meeting of the UN Human Rights Council in Geneva at the beginning of November, which will again deal with Xinjiang.

Analyst Iyad El-Baghdadi examines the ongoing tensions between the United States and the two Gulf states – Saudi Arabia and the UAE – and their geopolitical implications in ... END_OF_DOCUMENT_TOKEN_TO_BE_REPLACED

From the Euphrates to the Mekong, dams that ensure one country's water supply risk leaving others parched. But shared water resources can be a source of peace as well as conflict ... END_OF_DOCUMENT_TOKEN_TO_BE_REPLACED

For over fifty years, British photographer Peter Sanders travelled across the Middle East and further afield, seeking out the saints of Islam. His work uncovers a little-known ... END_OF_DOCUMENT_TOKEN_TO_BE_REPLACED

Europe's double standard on refugees, exposed yet again by the war in Ukraine, is morally deaf and geopolitically dumb. Europe can only defend itself by persuading developing and ... END_OF_DOCUMENT_TOKEN_TO_BE_REPLACED
Author:
Friedericke Boge
Date:
Mail:
Send via mail

END_OF_DOCUMENT_TOKEN_TO_BE_REPLACED
Social media
and networks
Subscribe to our
newsletter 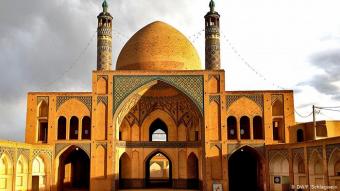