Welzbacher is also of the opinion that the Iranians are not at all hospitable: "The Iraniansʹ much-vaunted hospitality is a cliche, like the Russian soul" (p.127). As evidence of this, he lists incidents like these: "The stroppy conductor on the Tabriz-Tehran sleeper, who held onto my change from the tea for half the night…"

It should be noted, however, that Welzbacher spends his entire trip staying free of charge in a guest apartment belonging to a Diba employee. But he finds plenty to complain about there, too: "The apartment hadnʹt been tidied; before I arrived, tables and low cupboards were piled high with empty biscuit boxes and seltzer bottles…" (p.153). Moreover, he fails to see the services provided free of charge by the Diba employees as hospitality: they accompany him everywhere and "facilitate contacts, make appointments, order taxis, recommend restaurants, answer questions…" (p.33). 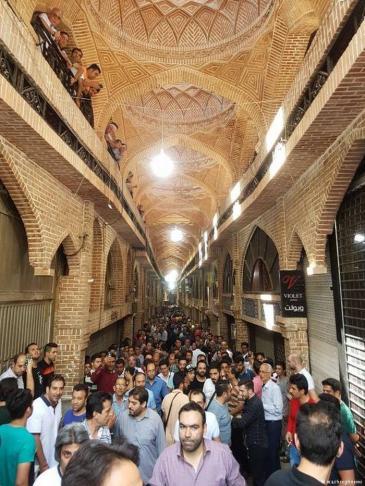 Irreconcilable with Welzbacherʹs own image of the "East": about Tehranʹs great bazaar, which isnʹt exotic enough for him, the author writes that it is in "many respects a modern retail centre, the structures and processes of which are as similar all over the world as the interests behind them”

But there is one place where the author does feel like heʹs in the "East": a teahouse that the Iranians pronounce "Ghaveh-Khane" and which Welzbacher calls "Kafe-Khane". "For the first time, I really feel I have arrived in a foreign world, because it conforms to the idea I came with" (p.25). He sees a teahouse in Tabriz as a symbol for the Middle East, as it "corresponds to the ideas of the East in something like the same way as the hamam in the odalisque images by Dominique Ingres". Why he compares the "Kafe-Khane", where "twelve men with wrinkled workersʹ faces sit at a line of little wooden tables in front of white-tiled walls," with the multi-figured composition of the picture "The Turkish Bath" (more than 24 naked women around a pool) remains unclear.

However, there are numerous passages throughout the book that seem fanciful and opaque, particularly when it comes to conversations with the decision-makers in the Diba architecture practice. Instead of addressing the specific issue and reporting the dialogue relating to it, the author tangles himself up in long, unsatisfactory descriptions and comments which are anything but illuminating: "When I probe further, I receive half-baked explanations. Golineh talks about problems with reaching agreements, with orientation, problems of all kinds. For the first time there is something inexpressible in the air, a sinister gap that casts a shadow over the conversation like a small black cloud…" (p.137). All the author is able to clarify is that the sense and purpose of his visit have still not been fulfilled.

And what is the sense and purpose of this business travelogue? "Iran, Ordibehescht 1396"proves to be a collection of bleak scenes, half-baked comments and observations free from any kind of sensitivity and reflection. It is a travelogue which has been written without any immediate use for the authorʹs notes, set down for the moment, and with a "recurring and sometimes implacable anger" (p.166).

Welzbacher presents the sense and purpose of his book as follows: "Since the trip failed on a business level, it would be a legitimate course of action to make a success of it on a journalistic level, to justify the effort, to give some sense to the costs" (p.169). Given a different outcome, that might have been a legitimate calculation.

Her grandparents are Jews – born in Tunisia and Algeria. Director Cleo Cohen has now broken the silence about this with a very personal debut. By Nadine Wojcik END_OF_DOCUMENT_TOKEN_TO_BE_REPLACED

Life imprisonment for crimes against humanity: that was the sentence handed down to Anwar Raslan in the world's first trial of a member of the Syrian torture system. Matthias von ... END_OF_DOCUMENT_TOKEN_TO_BE_REPLACED

Every year in December, the team at Qantara.de takes a look back at the articles that proved most popular with our readers. This year is no different. Here is a run-down of the ... END_OF_DOCUMENT_TOKEN_TO_BE_REPLACED

With his new album, "A Voice Keeps Calling Me", the Persian santur player Kioomars Musayyebi is building bridges from Iran across the Arab world to European early music. By Stefan ... END_OF_DOCUMENT_TOKEN_TO_BE_REPLACED

Former lawyer Said Haider has invented a chatbot for those seeking advice on anti-discrimination issues – Meta is the first chatbot of its kind in the world. In conversation with ... END_OF_DOCUMENT_TOKEN_TO_BE_REPLACED

Benjamin Idriz, imam of the mosque in Penzberg near Munich, is one of the most prominent representatives of Islam in Germany. He sees his role as building bridges to mainstream ... END_OF_DOCUMENT_TOKEN_TO_BE_REPLACED
Author:
Fahimeh Farsaie
Date:
Mail:
Send via mail

END_OF_DOCUMENT_TOKEN_TO_BE_REPLACED
Social media
and networks
Subscribe to our
newsletter