Christians in Aleppo
Rumblings beneath the Surface

Syria is not exactly renowned for being a bastion of democracy and human rights. Yet under Bashar al-Assad, Syrian Christians are free to practise their religion. Lately, however, they have become increasingly concerned about the gradual rise of Islamism in the country. Claudia Mende reports

​​ Walking through Aleppo's Jedeide district, with its cobbled streets, vaulted alleyways and splendid residences, you feel as if you are in France rather than Syria. The old Christian quarter of the city is packed with churches. The short walk from the Maronite cathedral to the Gregorian-Armenian Church of the Forty Martyrs will also take you past a Roman Catholic church and a Greek Orthodox church, all within a few minutes of each other.

Christianity in Syria is a melée of eleven different denominations. Even the locals can't quite get their heads around it. The Greek Orthodox Church is the biggest group in terms of numbers, but there are other Orthodox Churches, as well as Oriental Churches linked to the Pope in Rome. Around ten per cent of the Syrian population is Christian, and there are some 400,000 Christians living in Aleppo alone.

Sahat al-Hatab Square in the centre of town is dotted with plane trees and green park benches, and lined with groups of jewellery shops. This is where the Armenian silversmiths ply their trade.

The first thing you notice on entering the shop belonging to Hakop Okasjian is a photograph the Armenian has placed right beside the door. It shows the Syrian President Bashar al-Assad and his wife Asmaa with the Spanish king and queen. The photo is not one of the publicity shots you will find on walls all over the country; it is the private record of a state visit to his little shop that Okasjian guards like a treasure.

"We Armenians can live well in Syria," he says. "We have our own schools here, and newspapers and cultural events in Armenian." Like many of his countrymen, Okasjian's family fled to Syria from the Ottoman Empire after the 1915–17 genocide under the "Young Turk" leadership.

Their descendants still show their gratitude to the Syrian regime for allowing them to live there in safety and maintain their own culture and religion. Syria's religious minorities are loyal to President Assad because they see him as the guarantor of their religious freedom.

Aftermath of the Iraq War

The Chaldean Catholic cathedral is in the upmarket Aleppo district of Azizye. It is half-full during Sunday morning mass; the congregation are mostly elderly men and women. The word Chaldean refers to Chaldea, the Biblical term for Mesopotamia and southern Iraq. The Church's spiritual leader lives in Baghdad.

Protection from religious persecution: Syria's President Bashar al-Assad promotes a climate of tolerance of religious minorities like the Christians

​​ After the service, Bishop Antoine Audo receives the faithful in his bishop's residence. Dust eddies in the wind as they sit on park benches drinking bitter Turkish coffee from tiny cups. Antoine Audo, a Jesuit priest born in Aleppo in 1946, was a professor of Biblical Studies at the Catholic University of St Joseph in Beirut. He is regarded as one of the best theological minds in the Middle East.

Audo is another who doesn't have a bad word to say about the Syrian regime. He is a careful diplomat who led his flock through the difficult years of the 1970s and 80s.

Yet no other Church was as deeply affected by the Iraq War and its aftermath. Some 1.5 million Iraqi refugees remained in Syria for years. Many of the Christians among them have now moved on to North America, Europe and Australia, and Audo is able to dedicate himself to a new project: setting up a school for children of all religions and denominations.

Religious tolerance as a reason of state

"If you're born a Syrian Catholic, you remain one all your life," insists the bishop. Unlike in Europe, there is a general correspondence between culture and religion in Syria. Hardly any people convert from one Christian denomination to another. In secular Syria, the conversion of Muslims is not actually forbidden, but it is socially unacceptable. A Muslim who wants to convert to Christianity has to emigrate. 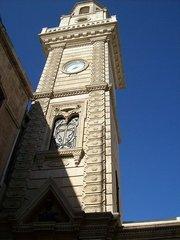 Bastion of Armenian culture: Aleppo's Armenian Church of the Forty Martyrs is one of the oldest churches in the Armenian diaspora

​​ Aleppo's Christians belong to the city's business elite and they participate actively in the social and political life of the town. The emigration rate is not high; there is only the worry that when someone goes to the US to study, they might not come back. The bishop points out that if, for example, anyone feels discriminated against at work for religious reasons, they can lodge a complaint with the authorities. It is very much in the authorities' interest, he says, to bring such conflicts to a swift resolution. After all, religious tolerance is a reason of state in the one-party Syria of President Bashar al-Assad, who is otherwise better known for employing competing state security services to keep his people under constant surveillance.

The reasons for this climate of tolerance are to be found in the complex fabric of Syrian society. The ruling elite around the head of state are Alawites, belonging to a liberal Shiite splinter group that is itself positioned on the margins of Islamic orthodoxy. Many Sunni Muslims consider the Alawites to be not entirely Islamic. Tolerance of minorities is therefore a question of political survival for the regime, and many Christians see in Assad the guarantor of their religious freedom.

Concerns about radical Islamism in Syria

They are, however, starting to worry. Officially there are no Islamist movements in the country; the Muslim Brotherhood is banned. But the bishop speaks, in his careful way, of a rumbling beneath the surface.

"Many Christians feel that in recent times, some Syrians have started to incline towards fundamentalist Islam," he says. The most visible sign of this is the many women on the streets of Aleppo who now wear the niqab. "Women who dress in the Saudi manner, completely concealed except for a slit for the eyes, are a new phenomenon in Syrian society," he stresses.

Is this veiling a political statement? The bishop's answer is cautious. "Their clothing does at least raise questions about the political ideas behind their appearance." The secular government is of the same opinion; in July 2010 it banned the niqab in schools and universities.

Syria is going through a period of upheaval. After decades of a socialist planned economy, it is now slowly opening up to the outside world – a world that many of its citizens regard as hostile. The gulf between rich and poor is growing. Some Syrians find the Western lifestyle very attractive, while others feel threatened by the change to their identity.

Bishop Audo thinks that the tendency towards radical Islam shows that some people are clinging on to a retrogressive identity because they fear these changes. It remains to be seen how this insidious Islamist influence will alter Syria's traditionally tolerant religious climate.

Iraqi Christian Refugees
Finding a Safe Haven in Damascus
The history of Christianity in Iraq dates back to the first century AD, but since the outbreak of sectarian violence in the country following the US invasion of 2003, many Christians are fleeing their homeland and finding sanctuary in Syria. Stephen Starr reports from Damascus

END_OF_DOCUMENT_TOKEN_TO_BE_REPLACED
Social media
and networks
Subscribe to our
newsletter