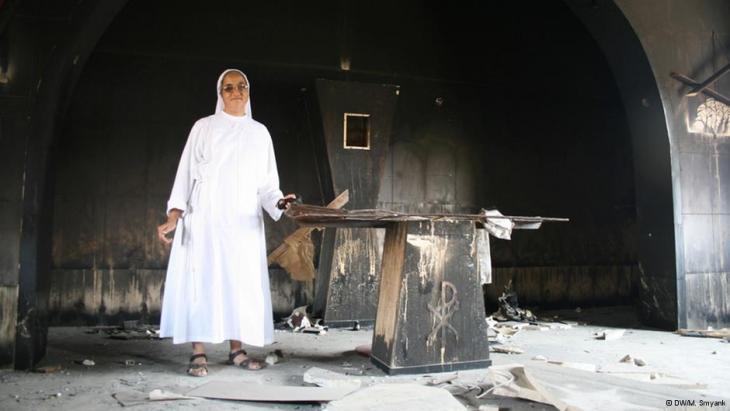 Christians in Egypt
Persecuted and Forgotten

Anti-Christian violence is on the rise in Egypt. Although 45 churches and buildings were burned to the ground just a month ago, the Egyptian state is doing little to protect the country's Christians. By Markus Symank

Charred benches, copybooks that have been reduced to ashes, the burned-out shell of a school bus, toilets and sinks that have been smashed to pieces, the melted blades of fans hanging from the ceiling … the Franciscan school in the Upper Egyptian city of Beni Suef looks as if it was the target of a bomb attack.

Dressed in white, Sister Nagaat stands beside the wreckage of an altar in a room with blackened walls. Mass can no longer be said here: the attackers took chairs, sacred images and even light switches and cables. They burned the cross on top of the building and raised the flag of al-Qaeda in its place. "The Islamists wreaked havoc for eight hours," says Sister Nagaat, picking up the head of a statue of the Blessed Virgin from the floor.

One month after the most intense religious unrest in Egypt since the revolution of 25 January  2011, the country's Christian community is still in shock. At least 45 churches and many other Christian facilities went up in flames on 14 August. The fiercest violence raged in Upper Egypt, where the number of Christians is particularly high. The attacks are thought to be retaliation for the Egyptian army's massacre of hundreds of people after it dispersed an Islamist sit-in protest in Cairo. Prior to the demonstration, the Muslim Brotherhood had accused Christians of supporting the military. 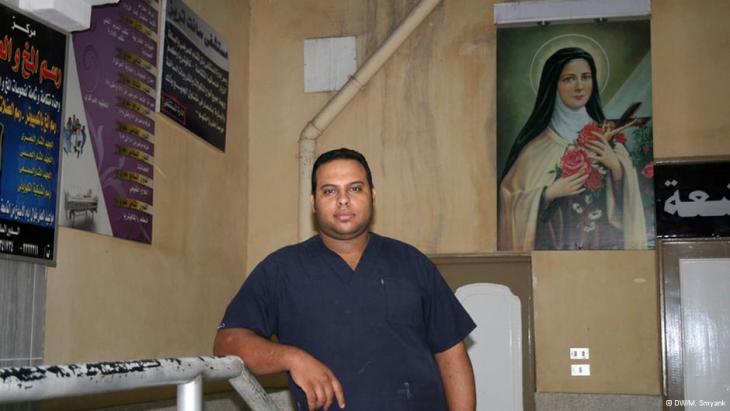 "The police can hardly protect themselves." Dr Amir Samy, who works at St Theresa's Hospital in Beni Suef, treated police officers injured in an attack on the local police station that took place on the same day the Christian school was torched

For decades, Egyptian Christians have been exposed to discrimination at work and in their daily lives. In the past few months, however, the number of violent attacks against them has risen significantly. Sister Nagaat blames the ousted Islamist government of President Mohammed Morsi. "President Hosni Mubarak put the preachers of hate behind bars," she says. "Under Morsi, however, they were allowed to agitate in the mosques as much as they wanted." She goes on to say that imams in Beni Suef called for a boycott of shops owned by Coptic Christians.

Although the security forces have arrested more than 2,000 Morsi supporters since 14 August, the situation has improved little for Christians. In Dalga, a small city in the upper Egyptian province of Minya, Islamists recently called for the introduction of a state based on Sharia law. Forty Christian families fled the area after arsonists torched their homes. The Christians who remained in Dalga now have to pay protection money to Islamists.

According to Amir Samy, a doctor at St Theresa's Hospital, members of the Muslim Brotherhood march through the centre of Beni Suef nearly every evening, threatening further attacks. Yet police have not complied with requests to place guards in front of the Christian hospital. Samy isn't angry, though. "The police can hardly protect themselves," he points out. On the day the Franciscan school went up in flames, Islamists also set fire to a central police station. Samy treated a number of policemen with bullet wounds. For one of them, help came too late; he was a 22-year-old Christian, and a friend of the doctor's.

Even though the military killed Christian demonstrators in Cairo just under two years ago, many Coptic Christians in Egypt are placing their hopes in the army. Last month, Defence Minister Abdel Fattah el-Sissi promised Christians that the army would pay for the restoration of destroyed churches, but little has happened so far. "No one from the government has even looked at the damage," says Sarif Nasser, a hairdresser from Diabiya, a village just south of Beni Suef that was founded by Christians. Now, the local church is nothing but a burned-out ruin, and the resident priest has fled. 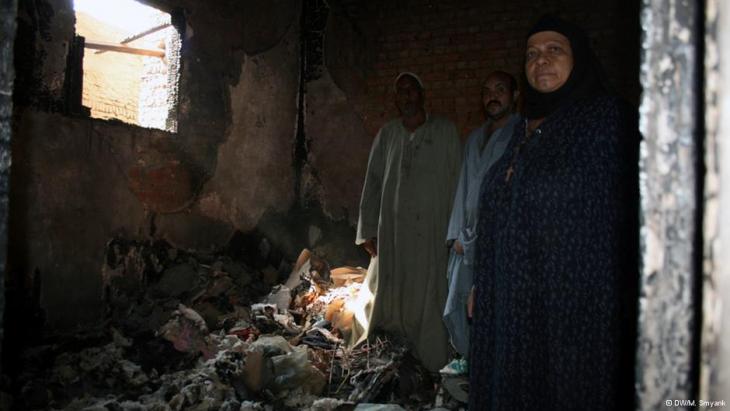 In August, Salil Shetty, secretary-general of Amnesty International, said "The Egyptian authorities must take immediate action to prevent further loss of life, while bringing security and public order back to the streets.The response of the international community has been weak and ineffective, even as everyone leaps to condemn the horrific loss of life."

"Hatred towards Christians has been around for a long time," says Nasser. "But only since Morsi have they been acting on it." Nasser was able to identify many of the attackers as members of the Muslim Brotherhood, while others, he says, were paid accomplices. The police initially arrested some of them, but they escaped the next day when a group of Islamists set the police station on fire.

In Beni Suef, progress on solving the crimes is slow even though the school sent the authorities a CD containing photos and recordings of the attacks made by neighbours. These images show dozens of plunderers, some laughing joyfully at the cameras.

Despite this evidence, local Christians say that few people have been arrested. Sister Nagaat is also disappointed by the lack of help from the local community. For her, that is the most difficult thing to understand; after all, two-thirds of her 600 students are Muslim. Some Muslims in the neighbourhood have expressed regret at the fire, she says, but when it comes to rebuilding the church, no one wants to help.

Home
Print
Newsletter
More on this topic
On the Death of Pope Shenouda III: A Pragmatist Who Was Not Afraid to Take a StandChristian Minorities in the Islamic World: No Arab Spring for ChristiansEgypt's Christian Minority: Copts Fear for the Future
Related Topics
Arab Spring, Arabellion, Christians in the Islamic world, Egypt Revolution 2011, Freedom of religion, Islamism | Political Islam, Minorities in the Muslim world, Salafis | Salafism, Sharia
All Topics

A Tunisian farmer attaches a machine to a cow's udder and sets the pump whirring, but he only expects to fetch less than half the normal amount of milk amid soaring fodder prices END_OF_DOCUMENT_TOKEN_TO_BE_REPLACED

Food prices doubled, salaries halved, banks restricting withdrawals: Egyptians now have the same problems as the Lebanese. But if things get worse here, the fallout will be far ... END_OF_DOCUMENT_TOKEN_TO_BE_REPLACED

Any reconciliation between Turkey and Syria’s Assad regime would have disastrous consequences for many Syrians, explains Syria expert Kristin Helberg END_OF_DOCUMENT_TOKEN_TO_BE_REPLACED

Iraq bears the scars of decades of conflict and has seen its antiquities plundered, yet the House of Manuscripts' collection has managed to survive END_OF_DOCUMENT_TOKEN_TO_BE_REPLACED

Chinese President Xi Jinping's visit to Saudi Arabia in December 2022 may have rattled Washington, but it simply highlighted the Arabs’ desire to diversify their foreign relations ... END_OF_DOCUMENT_TOKEN_TO_BE_REPLACED

There are signs of an imminent normalisation of relations between Turkey and Syria. This would allow Erdogan to score political points domestically before the upcoming elections ... END_OF_DOCUMENT_TOKEN_TO_BE_REPLACED
Author:
Markus Symank
Date:
Mail:
Send via mail

END_OF_DOCUMENT_TOKEN_TO_BE_REPLACED
Social media
and networks
Subscribe to our
newsletter