Christians in Iraq
Between the fronts

With the Mosul offensive having freed many Christian communities from the clutches of IS, there is undeniably cause for celebration. And yet the position of Iraq′s Christians remains precarious. Birgit Svensson reports from Baghdad

Christians in Baghdad's Virgin Mary refugee camp do not want to return to Qaraqosh. Even though the town has been liberated, it is devastated and mistrust of security forces is high.

"I'm not going back," says Youssef, shaking his head as he picks the ace of clubs out of his hand and slaps it on the table. The other men sitting around nod in agreement. When asked about returning to Qaraqosh, a Christian city in Northern Iraq recently liberated from the terror organisation Islamic State, the reaction at the next table is the same.

So far, no one has returned. In the refugee camp's cafeteria, the unanimous opinion is that, "Qaraqosh is no longer inhabitable." Almost everyone here has gone back to have a look at their houses and property and then soberly returned to Baghdad. Smartphone videos are making the rounds. They show rubble, broken porcelain, ravaged toys, collapsed ceilings and bombed-out attics.

The Virgin Mary refugee camp in the centre of Baghdad is only open to Christians. Christian Iraqi parliamentarian Yonadam Kanna rented the property – which is situated next to his Assyrian Democratic Movement headquarters – from the city after large numbers of Christians in Northern Iraq were forced to flee because of IS advances.

Those Christians have been living here since April 2015. In all, 150 families are here – 800 people; 100 of them school-age children. Eileen, a rotund and jovial woman in her late thirties, runs the camp. She says that there are 550 Christian refugee families living in Baghdad. Most are living with friends or relatives. "Those who didn't know anyone came here," she says. Most are from Qaraqosh.

Nehla is in the tiny kitchen of her trailer, preparing lunch with her 10-year-old daughter. The door is wide open. The winter sun is especially warm at midday, but at night it is bitter cold in Baghdad at this time of year. Nehla explains that her name means "take the water", and invites me in. Each family in the camp has a blue and white trailer with two bedrooms, a kitchen and a bathroom. The camp appears clean and well-kept. There is no comparison with Iraq's many other camps, which are generally equipped with tents and quickly turn into mud pits at the first sign of rain.

From Baghdad to Qaraqosh – and back again

Nehla, her husband and their two children are originally from Baghdad, says the 41-year-old. They owned an auto repair shop in Sara, a neighbourhood in the southern part of the city, where the Tigris makes a big bend.

When the civil war began in 2006, Shias and Sunni began killing one another and Christians were caught in the middle. "My husband received a threatening letter that informed him that we should leave the city." They decided to leave after Nehla's brother, who had just opened a restaurant, was killed. Nehla's husband sold the business and they gave up their apartment.

The family moved to Qaraqosh. The small-town in the Nineveh plains lies halfway between the Kurdish metropolis Erbil and what used to be the second largest city in Iraq, Mosul. It promised to be a safe haven for Christians. The city, which had 25,000 residents, quickly doubled in size. A wall was erected around the city, it had one checkpoint, controlled by Kurdish peshmerga soldiers.

But then "IS" came and literally took Hamdaniya, as the city is known in Arabic, overnight. All of Qaraqosh's residents fled the city in panic. "We were told that the city would be attacked," says Nehla of the hasty departure. When the jihadists arrived, the city was empty.

The peshmerga guards were already gone when the Christians fled. The residents were left totally unprotected. No one says it out loud, but in private they grumble that the peshmerga broke their promise to protect Qaraqosh. That is one reason that no one wants to return. Mistrust of the security forces sits deep. 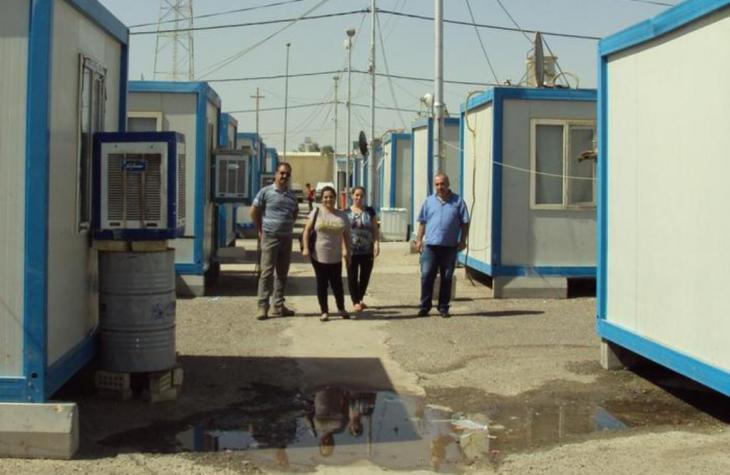 Traditionally Iraq′s Christian minority hails from the north of the country; other pockets of Christianity are found in the regions bordering it in northeastern Syria, northwestern Iran and southeastern Turkey, an area roughly corresponding to ancient Assyria. Christians in Iraq are not allowed to proselytise. Muslims who change their faith to Christianity, are subject to societal and official pressure, which may lead to the death penalty

At first, says camp manager Eileen, the camp received a lot of help. All of the major aid organisations were active here. They provided power to all of the containers, installed humidifiers, brought fuel for generators and financed playgrounds and a kindergarten. Now, she says, there is hardly any assistance. Eileen says that there are simply too many refugees in Iraq. "Now, all of the aid is focused on Mosul."

Nehla and her mother began making kibbeh, a traditional meal served in the form of dumplings or meatballs and made from bulgur. At mealtime, frying pans sizzle in kitchens in the trailers of the "Virgin Mary" camp. Modest orders for kibbeh also come from outside the camp. "But it still isn't enough for us to make ends meet," Nehla says.

Nehla's husband found work as a driver for the local alcohol distributer, a job reserved for Christians. Muslims are not allowed to produce, import, sell, or drink alcohol. In early November, the Iraqi parliament, which is dominated by Shia Muslims, voted for a nationwide ban on alcohol. Now, Christians are desperate to find a new source of income to secure their survival. Christian politician Yonadam Kanna says that he intends to go to the Supreme Court to appeal the ban.

Since Ali Khamenei, Iran's most powerful man, has openly and unconditionally come out in support of Putin's war in Ukraine, logistical help is on its way, with an allegedly ... END_OF_DOCUMENT_TOKEN_TO_BE_REPLACED

Tourists have been returning to Tunisia, Egypt and Morocco. But, given the global uncertainty caused by the Ukraine war, will the comeback be enough to save a struggling sector, ... END_OF_DOCUMENT_TOKEN_TO_BE_REPLACED

The highly controversial Indian blockbuster "The Kashmir Files“, on the exodus of Kashmiri Hindus in the 1990s, is characterised by unilateral representations, negative ... END_OF_DOCUMENT_TOKEN_TO_BE_REPLACED

"Flugt" is the world's first museum dedicated to the stories of those forced to flee. The new museum, which focuses on the fates of refugees then and now, is housed in a former ... END_OF_DOCUMENT_TOKEN_TO_BE_REPLACED

"Finding Home", the second album by Syrian-born, UK-based musician Maya Youssef, works through feelings of loss and destruction until its music reaches a place beyond war and ... END_OF_DOCUMENT_TOKEN_TO_BE_REPLACED
Author:
Birgit Svensson
Date:
Mail:
Send via mail

END_OF_DOCUMENT_TOKEN_TO_BE_REPLACED
Social media
and networks
Subscribe to our
newsletter