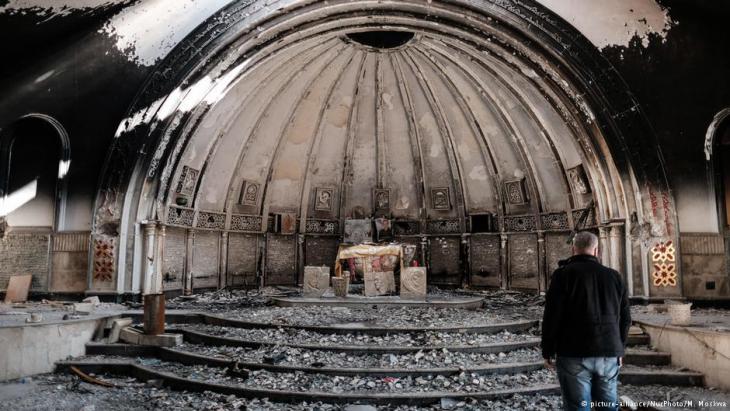 Christians in Iraq
Coping with wrack and ruin

The Christian villages around the Iraqi city of Mosul may have been liberated, but in reality, the scars of brutal IS rule mean they are uninhabitable. For most residents, returning is not an option at this stage. By Karim El-Gawhary

The name of the church in eastern Mosul is highly evocative. The Titanic Church is built like a ship. The church tower resembles the mast of a boat and the interior is reminiscent of the belly. During IS's two-and-a-half year rule, the Titanic Church literally sank. And although eastern Mosul has in the meantime been recaptured by the Iraqi army, the church is still a scene of total devastation. Everything has been looted from inside. All that remains is the concrete skeleton of the structure. A few children play in the ruins.

"I used to have many Christian friends at school. IS gave them 10 days to move away," says a small boy named Rabieh. The children show us the upper section of the church, which bears traces of gunshot and battle. "The IS snipers were up there," Rabieh remembers and points to several church windows that look like portholes.

The wasteland of Mosul 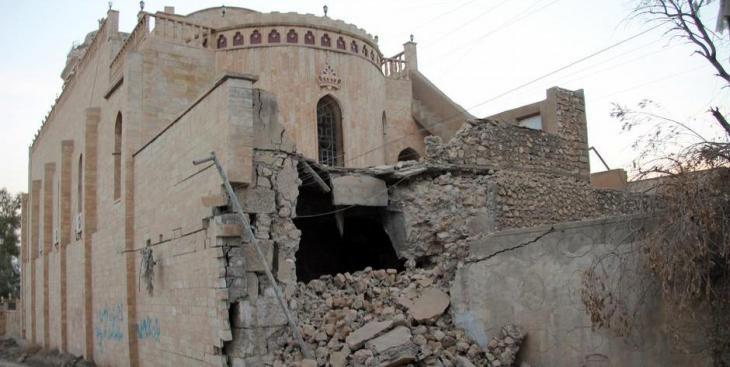 Formerly magnificent churches reduced to rubble: for two years the terror militia IS held sway in Mosul. Tens of thousands of residents in the surrounding Christian villages were forced to leave their homes – or convert to Islam

The Christian population of Mosul was never very large. Most lived in the surrounding villages, such as Bartella or Qaraqosh, parts of which were freed from the clutches of IS months ago. But they remain uninhabitable to this day. Many of the former residents returned in buses on the first Sunday following liberation. But they just came to celebrate a mass, before going back to their refugee camp.

One of these camps is the Christian refugee camp "Ashti" in the Kurdish city of Erbil. It is a well-organised container village. Most residents have lived here for two-and-a-half years already, after all when IS seized power, the Christians were the first to be made refugees.

At the heart of the camp is the Bashir Church, an Assyrian-Christian house of worship cobbled together out of containers. At least 200 people attend the service here on this particular Sunday. They are praying to be able to move back to their villages soon.  But that could take at least another year, says Emanuel Adel, the priest of this congregation. Many of the Christian villages may have been liberated, but they are completely uninhabitable, says Adel.

"There are no basic services such as water and electricity, the infrastructure is devastated, there are no schools and administrative offices. It all needs to be rebuilt," he says. Also, many of the houses have been destroyed in airstrikes and burned to the ground, he adds. Expelling the IS jihadists came at a high price. "And most of the houses have been looted," explains the refugee camp priest.

The ideology lives on 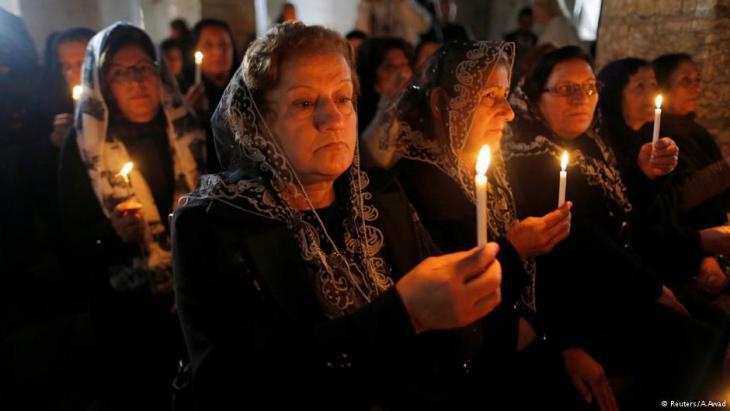 Gradual return to normality: in December 2016, the first church services were held in villages formerly occupied by IS. A return to life as it was before the occupation is however not (yet) possible: "There are no basic services such as water and electricity, the infrastructure is devastated, there are no schools and administrative offices. It all needs to be rebuilt," says priest Emanuel Adel

There is an overriding sense of sadness within the church community, he says. Many members of the congregation are profoundly depressed. "No one knows what the future of Iraq looks like and that does of course impact upon the mood of Christians," he says.

"IS can perhaps be militarily vanquished, but the IS ideology lies on," the cleric believes. "Many of the objects that were stolen from the Christian villages were found in neighbouring Muslim villages," the priest reports. Plenty of people co-operated with IS, he says.

He also expects little from the Iraqi government. In an open reference to Iranian influence on the central government in Baghdad, he calls the authority corrupt and says it is being steered by foreign powers. "Our problems are far from being solved," is his view. "It is likely to be a while before our lives as refugees come to an end and all Christians are able to return to their villages."

Home
Print
Newsletter
More on this topic
The Mosul offensive: In enemy heartlandChristians in Iraq: Between the frontsChristian minorities in the Islamic World: No Arab Spring for Christians
Related Topics
'Islamic State' | IS, Antiquities and historical monuments, Christianity, Christians in the Islamic world, Church, Democracy and civil society, Islamism | Political Islam, Minorities in the Muslim world
All Topics

Very different Western reactions to the suffering in Ukraine and the Arab world show that there is a profound rift among cultures. Essay by Michael Young END_OF_DOCUMENT_TOKEN_TO_BE_REPLACED

From the Euphrates to the Mekong, dams that ensure one country's water supply risk leaving others parched. But shared water resources can be a source of peace as well as conflict ... END_OF_DOCUMENT_TOKEN_TO_BE_REPLACED

Muqtada al-Sadr, the biggest winner in the recent election, aspires to implement great change in Iraq, but reform is easier said than done, writes Massaab al-Aloosy. Correcting a ... END_OF_DOCUMENT_TOKEN_TO_BE_REPLACED

With spring, migration on the Balkan route is on the rise again – and with it the misery, violence and illegal pushbacks at Croatia's external EU border. ... END_OF_DOCUMENT_TOKEN_TO_BE_REPLACED

Much effort is being put into rebuilding churches in Iraq that were destroyed by Islamic State. The message of hope is for Christians to return. Judit Neurink reports from Mosul END_OF_DOCUMENT_TOKEN_TO_BE_REPLACED

In Iraq – which has suffered four decades of conflict and years of political and economic turmoil – separating and recycling waste has yet to become a priority for most people. ... END_OF_DOCUMENT_TOKEN_TO_BE_REPLACED
Author:
Karim El-Gawhary
Date:
Mail:
Send via mail

END_OF_DOCUMENT_TOKEN_TO_BE_REPLACED
Social media
and networks
Subscribe to our
newsletter