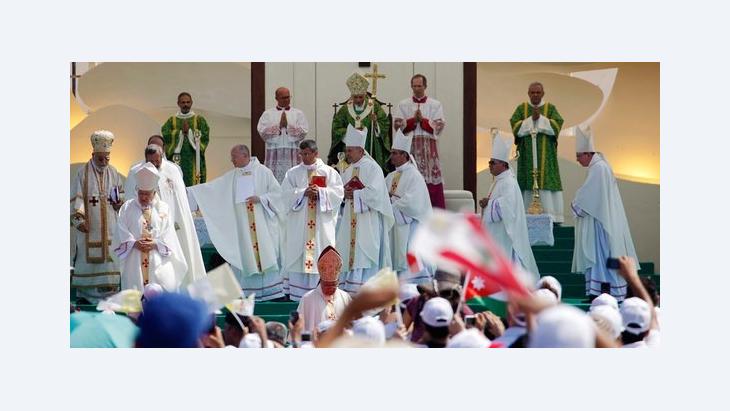 Christians in Lebanon
Caught between the Frontlines

﻿The Pope visited Lebanon at a precarious time. The destabilisation of Syria may have given Christians more room to manoeuvre, but they are also being dragged into the conflict between Shiite and Sunni Muslims. Mona Naggar reports from Beirut

﻿There was no mistaking Pope Benedict XVI's message. During his three-day visit to Lebanon, he talked about peace as a fundament of society, about solidarity, respect for human life and human dignity. The Pope also spoke about the important role that families and schools can play in educating future generations to safeguard peace. The implementation of these values is more urgent than ever in contemporary Lebanon. The nation's political situation is extremely fragile.

It is therefore not surprising that many people are weighing up the possibility of leaving it behind – Youssef Harb, for example. He describes the situation in Lebanon as "miserable on all levels". People are being kidnapped, says the young Christian, and there are regular gun battles. It's a pity he's having to spend his youth here, of all places: "If it kicks off again, then I'm seriously thinking of going," he says. 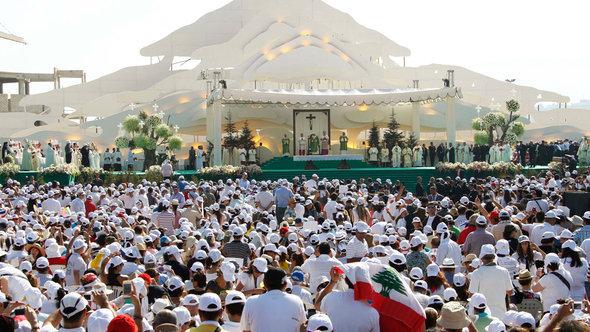 Papal message of peace: During his visit in Lebanon, Benedict XVI. said, "I hope that Lebanon will fortify the communion among all her inhabitants, whatever their community or religion, that she will resolutely reject all that could lead to disunity, and with determination choose brotherhood"

"Homeland belongs to everyone"

Laila Saikaly, on the other hand, has never considered leaving Lebanon. Not even in the confusion of the Lebanese civil war. Back then, she and her family were forced to leave their village in southern Lebanon. Even now, in these politically turbulent times, she would never think of turning her back on her homeland. But the former teacher concedes that the security situation is a cause for concern.

"You just never know!" she says. "Politically, things are on a knife-edge. There might be an attack, and you might find yourself caught up in it." The economic situation is also a great worry to her, as she imagines the impact it will have on her children and grand-children: "Everything's getting more expensive while wages stagnate."

The 70-year-old lives with her husband in Bouchariya, a district in eastern Beirut. There's a Maronite community here looked after by Nikolas Saikaly, who is also 70. Since the rebellion began in neighbouring Syria, Father Saikaly repeatedly hears members of the community express their fears that radical Muslims could seize power there. He points out that Syrians and Lebanese are closely affiliated with one another.

Many Syrians live in Lebanon, and vice versa. He is worried that Christians in the Middle East often suffer discrimination on the grounds of their religion: "Homeland belongs to everyone and each has his own God to pray to," he says.

Prospects of an impending collapse of the Assad regime in Syria present Lebanon with its greatest challenge in recent history. Lebanese Christians, who make up around 25 per cent of the population, were for a long time politically marginalised under Syrian occupation, which lasted until 2005. Christian politicians have shown renewed confidence in recent years. Now, as Syria and pro-Syrian forces in Lebanon show signs of weakening, they could garner even more strength. But just like the rest of the country, Lebanese Christians are deeply divided over events in Syria. 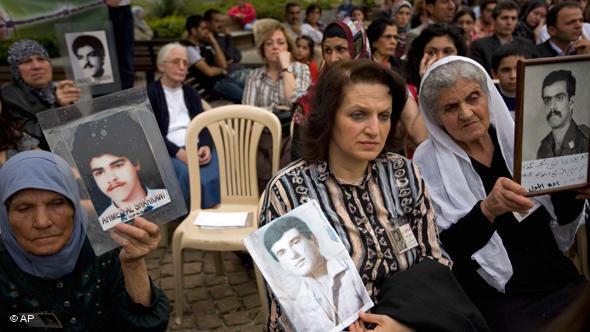 "Christian political leaders on both sides are prisoners of their own history and the bloody conflicts of the past." – Pictured: Memorial service for the victims of Lebanon's civil war (1975–1990)

​​The political representatives of Christians in Lebanon are distributed between the two enemy camps – The March 8 Alliance and The March 14 Alliance. The Free Patriotic Movement sides with the Shiite Hezbollah, which is allied with the regime in Damascus. The Forces Libanaises and the Phalangists form an alliance with the Sunni "Future Movement". They side with the rebels. The designations "Shiite Christian" and "Sunni Christian" have long been incorporated into Lebanese parlance. Those who do not want to take sides in this abominable conflict, often experience deep frustration.

George Sabra is a Protestant and Director of the Near East School of Theology (NEST) in Beirut. In comparison to other Arab nations, Christians in Lebanon do have some influence over their parties and diverse institutions, says Sabra. "The Christians here should play a positive role and create a balance between hostile Shiites and Sunnis." But the theologian nevertheless fears that this is not a vision being pursued at all within Christian parties. Christian political leaders on both sides are prisoners of their own history and the bloody conflicts of the past, he says. "They are not in any position to bury their conflict."

Although Sabra looks favourably upon the political upheaval in Arab regions, he fears it may have a negative impact on Christian communities in the Middle East. Although there is no direct Islamic-Christian confrontation, Christians could find themselves caught up between the frontlines.

The young Lebanese Christian Youssef Harb, who makes no secret of his future plans should the situation in his country worsen, has high expectations of the papal visit. He hopes it will serve as a small step towards greater understanding within the Christian community in Lebanon.

Home
Print
Newsletter
More on this topic
Christian Minorities in the Islamic World: No Arab Spring for ChristiansThe Palestinian Pastor Mitri Raheb: ''A closed off Islam is dangerous for Muslims''Interview with the Lebanese Christian politician Tarek Mitri on Christians and the Arab Spring
Related Topics
Arab Spring, Arabellion, Christians in the Islamic world, Dialogue of Religions
All Topics

Any reconciliation between Turkey and Syria’s Assad regime would have disastrous consequences for many Syrians, explains Syria expert Kristin Helberg END_OF_DOCUMENT_TOKEN_TO_BE_REPLACED

There are signs of an imminent normalisation of relations between Turkey and Syria. This would allow Erdogan to score political points domestically before the upcoming elections ... END_OF_DOCUMENT_TOKEN_TO_BE_REPLACED

As Syrian camps housing families of Islamic State fighters get more dangerous, there are calls to bring children out, even if the mothers don't want to go. The idea of separating ... END_OF_DOCUMENT_TOKEN_TO_BE_REPLACED

Where are the measures to deal with the looming challenges facing the Arab world? In this commentary, Marwan Muasher warns that the region is in grave danger of falling behind ... END_OF_DOCUMENT_TOKEN_TO_BE_REPLACED

At the end of every year, the team at Qantara.de gives you a run-down of the ten most-read articles on the site over the past 12 months. Here is a quick overview of the stories ... END_OF_DOCUMENT_TOKEN_TO_BE_REPLACED

Social engagement is often motivated by religious factors. A new book explores the background to these community efforts and appraises how effective they are in helping to ... END_OF_DOCUMENT_TOKEN_TO_BE_REPLACED
Author:
Mona Naggar
Date:
Mail:
Send via mail

END_OF_DOCUMENT_TOKEN_TO_BE_REPLACED
Social media
and networks
Subscribe to our
newsletter