Christians in the Middle East
Between Coexistence and Suppression

Christians and Muslims have a long history of coexistence in the Middle East. Martin Tamcke, theologian, describes the history and the variety of Christian communities in the Orient in his recently published book. Claudia Mende read it 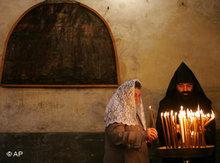 Native to the Orient: an Armenian Orthodox priest and a worshipper light candles following the Armenian Christmas Eve procession in the Church of the Nativity, Bethlehem, West Bank

​​One rather pointed demand often aimed at Islamic associations in Germany is that Muslims should first help Christians in Islamic countries attain equal rights before demanding their own rights here. The role of Christians in the Arab world has always been a political issue and the West has enjoyed using its fellow Christians from the Orient for its own purposes, especially when convenient. Right from the beginning of his book, Martin Tamcke, Professor of Ecumenical Theology at the University of Göttingen, reassuringly distances himself from such tendencies.

Tamcke provides an overview of the overwhelmingly vast variety of Christian confessions in the Orient. There are the Armenians in Turkey, the Maronites in Lebanon, the Copts in Egypt, the Chaldeans in Iraq and Syria, and the Orthodox Church throughout the whole of the Middle East. Common to all of them is that they not only differ in religious persuasion from Arabs, but are ethnically distinct as well. The Copts, for example, trace to their origins back to the time of the pharaohs. Syrian Christians emphasize their own language, Aramaic, which is still used in their liturgy to this day.

According to Tamcke, the Oriental churches remind us that the native soil of Christianity is to be found in the East and not the West. There are no reliable statistics on the exact number of Christians living in each separate country, but it is estimated to together total some ten million. Since the beginning of the war in Iraq, there has been a new and massive wave of emigration from the whole of the Middle East. Fundamentalist tendencies and an insecure economic future are the main reasons for this emigration.

Acceptance of Christians as litmus test 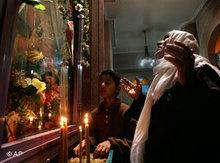 Egyptian Copts light candles in prayer at the St. Maximus Church Alexandria, 17 Apri 2006. Police fired live ammunition into the air and lobbed tear gas into rioting crowds of Christians and Muslims outside the church the day before

​​For the theologian Martin Tamcke, the position of Christians as a minority in an Islamic context serves as a kind of litmus test for the sensitivities of Islamic societies. How Christians are treated is a sign of whether the Islamic world can develop into a true multi-religious society or if it continues to drift in the direction of Islamism. After most Jews fled Muslim countries following 1948 and Baha'is were subjected to persecution in Iran, Christians today form the single largest non-Islamic community in the region.

Tamcke has gotten to know the Orient through his teaching assignments in Damascus, Aleppo, Tehran, Cairo, and Beirut. His work is not a list of accusations, but he instead aims to contribute to a better understanding of the complexities surrounding these issues. He also expressly points out that it is not only the Islamic world that has something to learn. European Christianity had to follow the difficult path of critical self-reflection and is still not immune from occasionally lapsing back into old patterns of thought. Similar to Islam, the churches of the East have yet to pass through the fire of the Enlightenment. 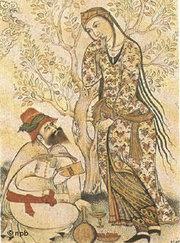 Medieval depiction of Avicenna, receving knowledge by a muse. Avicenna (980 –1037) had - like many of his fellow Muslims - Christian teachers

​​Through an abundance of examples, the author succeeds in clearly presenting the numerous facets of the centuries-old coexistence between Christians and Muslims in the Orient. Everything is covered – from peaceful coexistence through subtle discrimination to open persecution and pogroms. Shortly after the Islamic conquest in the 7th century, the caliphs offered religious minorities protection treaties, which ensured the legal framework for their continued existence. Protection treaties functioned according to the principle of tributes in exchange for guaranties of security from harm.

To this day, however, opinions are divided on how to interpret these protection treaties. For Muslims, they are an expression of a tolerance unknown in Europe at the time. The Oriental Christians themselves interpret this as an expression of humiliation, as such treaties cemented their position as second-class citizens. Tamcke regards them as originally being remarkable within their historical context, although they were later used exclusively in a repressive manner. In any event, the number of Christians in the Orient has steadily fallen over the centuries.

The book is at its best where it describes the course and patterns of interreligious dialogue between Christians and Muslims. It becomes apparent how the debate with the other has proven essential for each culture. Oriental Christians conveyed the treasure of antique Greek knowledge to the Arabs. They translated the writings from ancient Syrian into standard Arabic. At the same time, important Muslim philosophers, such as Avicenna (980 –1037) and the mathematician al-Farabi (873-950) had Christian teachers. 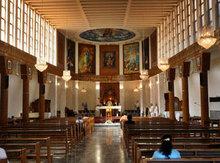 End of an era? In the early 1980s, Iraq's Christian population numbered 1.4 million, now it's down to less than half. Sunday mass in this Syrian Catholic Church in Baghdad is almost empty

​​Less convincing is the part of the book dealing with contemporary issues. After the excursion into history, Tamcke quickly touches upon the current situation of Christians in Turkey, Iraq, Iran, Lebanon, Ethiopia, and Egypt. The selection of countries here is too one-sided. There is no true freedom of religion in any Arab country, and Tamcke rightly points to this sad outcome.

Nonetheless, it would have been preferable if the author had included an overview of countries such as Jordan and Syria in order to round out the picture. In Syria, Islam is not the state religion and citizens in the land of Bashar al-Assad are proud of a long tradition of mostly peaceful multi-religious coexistence.

The Iraqi Church, in contrast, is facing annihilation if the situation in the country doesn't stabilize. More than half of the around one million Iraqi Christians have already fled. This massive exodus is a direct consequence of the American invasion. And just as their Islamic neighbors, Arab Christians have been punished by US policy, which they equally reject.

Armenians in Syria
Half a Home
At the same time as the massacre of the Armenians around 1915, the Ottoman army drove hundreds of thousands of Armenians into the Syrian desert. Today, some 80,000 descendants of survivors live in Syria. Charlotte Wiedemann has visited them

END_OF_DOCUMENT_TOKEN_TO_BE_REPLACED
Social media
and networks
Subscribe to our
newsletter