The Turks' Fear of the Missionary Menace

Despite Turkey's remarkable reforms in the wake of the country's rapprochement to Europe, Turks' fear of Christians is deep-rooted and goes back to WW I history. Susanne Güsten has this background report 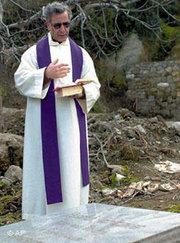 Andrea Santoro, Catholic priest in Trabzon, was killed by an alleged fanatic. The belief that Christians are out to subvert Turkey is still fairly wide spread today

​​A teenager went on trial in the Turkish Black Sea town of Trabzon in mid-May for the murder of the Catholic priest Andrea Santoro. Santoro was shot and killed outside his church in Trabzon on February 5 by an assailant who yelled "Allahu Akbar" – Arabic for "God is great". The 16-year-old youth charged with the crime told the court he had shot Santoro because he suspected him of working to convert Muslims to the Christian faith.

"I killed him because he was a missionary", the youth said. Such suspicions of Christians are widespread in Turkey. An irrational fear of Christian missionaries supposedly working to undermine the country, permeates Turkish society – right up to the top. Susanne Güsten has the story

Turkish newspapers investigating the murder of the catholic priest reported with a shudder that Christian literature printed in Turkish was freely available in his Trabzon church - n indication that he might have been involved in missionary activities, reporters surmised. The fact that the mere suspicion of missionary work is widely seen as a sort of extenuating circumstance for the murder of Father Andrea worries observers like Father Ian Sherwood, parson of the Anglican Christ Church in Istanbul:

"When a leaflet is in English, explaining something of the Christian church, it's taken to be something controversial. It seems peculiar that just because there's Christian literature in Turkish, that this should suggest that the late father Andrea was doing something untoward in Turkey. Of course he wasn't. I find it quite distressing to hear this criticism of the murdered priest simply because there was literature there."

While it is not illegal to own or to distribute Christian literature in Turkey, Christian clerics are often accused of attempting to convert Turkish Muslims to Christianity and thus subvert Turkish society.

It is less a legal than a social problem, says Behnan Konutgan, a Protestant clergyman in Istanbul:

"In Turkey the term 'missionary' is applied exclusively to Christians. Most Turks take it to mean an enemy of Turkey, who want to destroy the country. We are treated with hostility merely for being Christians. They call us 'gavur', godless people, that is a very bad word here. The dictionary of the Turkish Linguistic Society defines 'gavur' as meaning: 'someone without religion or belief, a Christian, a bad person'. This is why everyone thinks we are godless and bad people."

The Immanuel Church, of which Konutgan is the pastor, is tucked away discreetly in a back building in Istanbul's basar district. A security guard opens the iron gates to visitors in the know. Not even a sign on the door advertises the presence of a church here, much less a church steeple. Even so, neighbors and passers-by frequently complain about its presence, says Konutgan:

"I am often reported to the police, I have been fetched down to the station at least 20 times; I have even been jailed by the police. Of course I am always released by the courts, who know the law, but unfortunately the people and the police do not know the law."

"Missionaries are out to destroy our faith"

The view that Christians are trying to subvert the country through missionary activities can be heard everywhere in the Istanbul basar.

Trader Yusuf Nizan for example is convinced of the danger:

"Of course the missionaries are active here. They are the tools of certain powers, large powers. They are not after religious ends, they have other goals. These powers are out to destabilize our country."

"Secret powers are at work here, they are working in secret. Foreign states, in my opinion, out to destroy our faith. America, probably also Israel."

Historic roots of the conflict

The bizarre idea that the Jewish state Israel is working to convert Turkish Muslims to Christianity is not uncommon in the basar. And many people are convinced that the Christians are out to destroy Turkey: A fear that has endured since Western powers attempted to carve up Anatolia after World War One – and a fear that is fanned in the mosques of Turkey to this day for example in sermons like the following, which was read out at Friday prayers in mosques around the country:

"The powers who refuse to accept the spread of Islam as God's one true faith have stopped at nothing to hinder its rise. They sent out so called holy armies to eradicate Islam and the Muslims from history but they did not succeed. Just as in those days, these powers today continue to oppose Islam as an obstacle to their aims. These powers are still acting in a planned and organized manner to separate our people from its faith."

This is an excerpt from an official sermon from the state-run Department of Religious Affairs, which pens the sermons for all 70.000 mosques in Turkey. The fear of Christian missionaries even extends to the Turkish government.

Converts have inspired a whole research industry in Turkey. Hardly a month goes by without a conference on the missionary threat being held at one Turkish university or another. One of the leading researchers in the field is Ali Riza Bayzan, who is currently publishing his third book on the missionary menace.

A previous book of his entitled "The Global Christening" dealt with the supposedly conspirative nature of Christian organisations like the catholic charity Caritas, as Bayzan explains:

"In its English language publications, Caritas presents itself as a religious organization following God's commands. But in their Turkish publications they present themselves as a humanitarian organization which does not discriminate according to race or religion. Its quite suspicious, this attempt at disguise."

Under the guise of humanitarian help, Caritas tries to convert hapless Muslims, Bayzan claims. As an example he cites the aid efforts after the Turkish earthquake of 1999, in which tens of thousands died and hundreds of thousands were left homeless:

"I have seen with my own eyes that organizations like Caritas were attempting to convert people in the disaster area, using a mixture of aid and pressure."

Turkish Christians and the crusaders

The origins of this deep-seated distrust of the Christians go even further back then World War One and the birth of the Turkish nation, says Pastor Konutgan. They go right back into the middle ages:

"The crusades are still a big issue here. We Turkish Christians have nothing to do with the crusades but people here think of us as crusaders. That's why they have such deep prejudices against us."

Simmering prejudices that can boil over at any time, as various attacks on Christians around the country have shown in the past weeks and months. Although freedom of religion exists on paper, the practice is a different matter, says Father Ian of Istanbul's Christ Church:

The way to Europe as a possible solution

"Certainly, if I felt called to go out and say: O come, come to Christ Church, here you'll hear the gospel, it would be a very dicey situation indeed. Obviously, the church wishes to be free, as it is in Europe and most countries of the world indeed, and that freedom does not exist at the moment in Turkey."

"To tear down the wall of prejudice against us Christians will take a very long time. A hundred years maybe. Only our grandchildren will see this happen."

Mar Musa Monastery, Syria
Muslims and Christians Sharing Spirituality
In 1983, a Jesuit Father rediscovered an 11th century monastery in the Syrian desert. Twenty years on, it is a place where monks and nuns live together and where Muslim visitors sometimes even pray with Christians. Christina Förch has the report

END_OF_DOCUMENT_TOKEN_TO_BE_REPLACED
Social media
and networks
Subscribe to our
newsletter