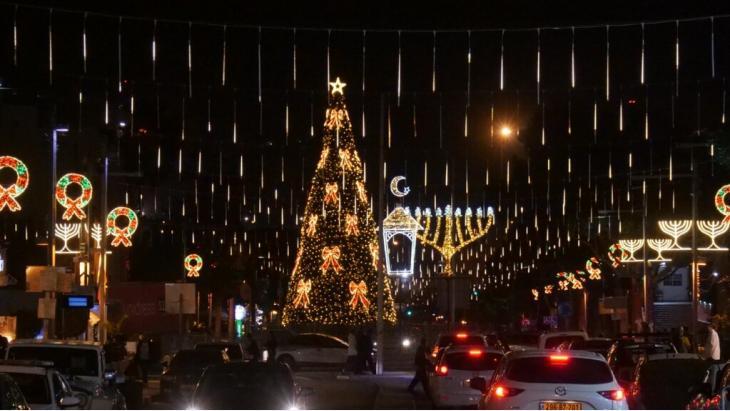 Christmas in Israel
Culture war over the Christian holiday

Christmas is becoming increasingly popular among secular Israelis. It spreads a festive atmosphere that promotes understanding between people of different faiths. Orthodox Jews, however, view the holiday as a threat. By Joseph Croitoru

Christmas has become increasingly popular in secular circles in Israel in recent years. These days, it is almost a matter of course for retail chains to set up departments offering what are known – even in Hebrew – as "Christmas" items in the run-up to the holiday season.

Setting the tone is the major supermarket chain Tiv Taam (Good Taste), which reports that sales of Christmas goods have increased almost every year. Customers are particularly keen on purchasing Christmas trees, which in Israel are usually artificial products made of brightly coloured plastic.

The rising popularity of the Christian festival of lights is also evident from the growing number of Christmas markets in Israel. More and more markets have opened in recent years in Arab-Christian towns, especially in Galilee. Thanks to an upswing in the number of Jewish visitors, they are often overcrowded.

When Israelis were unable to travel abroad during the COVID-19 pandemic, the town of Nazareth even felt compelled to extend the Christmas season to fifty days to cater to the crowds.

The Christmas atmosphere helps promote a feeling of understanding in both Arab and mixed Jewish-Arab towns and cities. Efforts are now being made to combine the Jewish Hanukkah festival with Christmas under the new Hebrew portmanteau "Chanuchristmas" not only in mixed Jewish-Arab towns and cities, but also this year in Haifa, Jaffa and the city of Acre, a centre of the medieval Crusades.

Indeed Christmas markets and related events have long been marketed as "Chanuchristmas" events in quite a few predominantly Jewish cities and at universities. 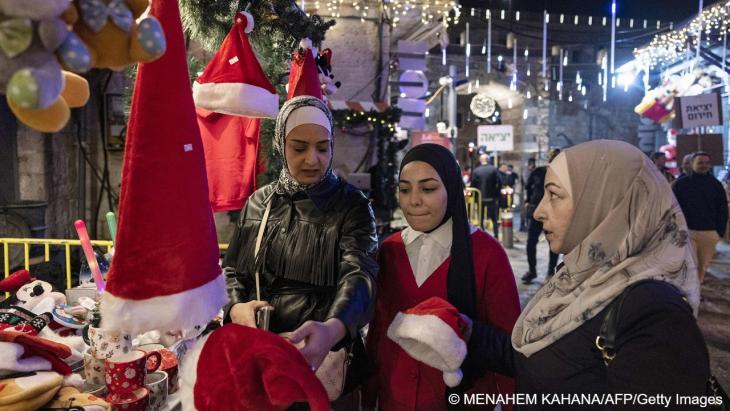 "The rising popularity of the Christian festival of lights is also evident from the growing number of Christmas markets in Israel. More and more markets have opened in recent years in Arab-Christian towns, especially in Galilee," writes Joseph Croitoru

From religious quarters, however, the new secular "cult" of "Chanuchristmas" is coming under serious fire for blurring the "Jewish identity". Although the secular camp has become inured to such criticism, this year the mood of Christmas cheer among liberal Israelis has been dimmed by growing concerns about the incoming, strongly right-wing new Netanyahu government. Fears are that the country's cultural diversity will be threatened by policies aimed at limiting its culture and identity to what is Jewish.

An appeal by Anat Kamm, an editor at the liberal left-wing Israeli newspaper Haaretz, recently made waves. She called on Israelis to celebrate Christmas and demonstratively put up Christmas trees on their balconies and terraces as a symbol of protest and "civil uprising" against the country's renewed political shift to the right.

However, her appeal was not applauded everywhere, even in secular circles. Orly Noy, chair of the board of the prominent Israeli human rights organisation B'tselem, accused Kamm of indulging in "commercialised kitsch", saying she should display a Palestinian flag on her balcony rather than a Christmas tree.

In the right-wing media, Kamm's appeal was cast as part of a development that is corroding the country's Jewish culture. Very recently, there was an outcry in the Hebrew-language Twitter community when a female member of the ultra-nationalist Israeli organisation Im Tirzu posted a complaint about a branch of the supermarket chain Tiv Taam. 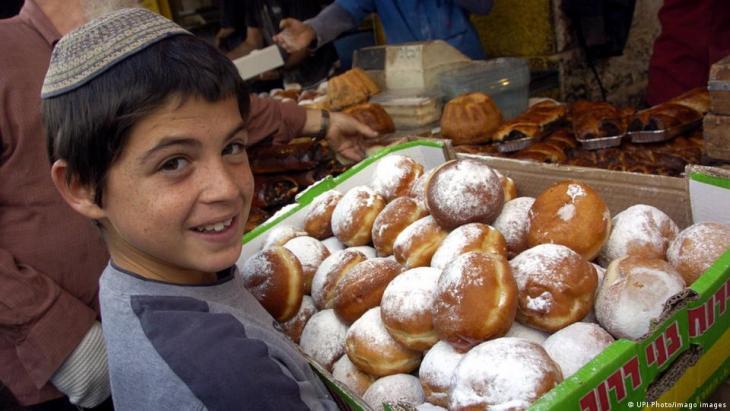 Sweet treat at the centre of a culture row: very recently, a member of the ultra-nationalist Israeli organisation Im Tirzu caused an outcry on Twitter when she complained that a supermarket chain had a prominent display of Christmas good while "Sufganiyot" (filled doughnuts that are eaten during Hanukkah) were relegated to a corner

She had been angered by how the shop displayed a broad assortment of Christmas articles in its entrance area, while only a few sufganiyot (doughnuts with various fillings which are eaten during Hanukkah) were on offer in a small corner. Tiv Taam responded to the criticism with a campaign of full-page ads (in Haaretz, for example), wishing the public a "Happy Chanuchristmas".

Another right-wing activist, this time from an NGO that agitates against "illegal immigration", expressed outrage that the Tel Aviv-Jaffa city administration was offering "Chanuchristmas city tours". "I just want to remind people," she wrote on Twitter, "that for generations Jews were persecuted, abused, murdered and massacred in the name of the man whose birth the Tel Aviv city fathers are now celebrating under the sycophantic label 'Chanuchristmas'."

But Tel Aviv-Jaffa, which has held an increasingly well-frequented Christmas market under the "Chanucristmas" label for the past five years, was not daunted by these reactions. The city administration parried the fierce attacks posted on its Facebook page, where it was accused of heretical and unpatriotic behaviour, with the statement: "Tel Aviv-Jaffa is home to Jews and Christians, and we celebrate the holidays of different religions with the conviction that all have their place – this is what pluralism looks like."

The dispute over the enthusiasm for Christmas among the secular population also reached the Knesset, Israel's parliament, this year. It all began with criticism voiced by Yinon Magal, a radio journalist who is popular in right-wing nationalist and religious circles, that a Christmas tree but no hanukkiah (Hanukkah candelabrum) had been set up in the entrance hall of the Faculty of Law at the Hebrew University in Jerusalem.

Outgoing Deputy Foreign Minister Idan Roll of the liberal "There Is a Future" party felt compelled to respond to the criticism in a speech before the Knesset. He said that the outcry by right-wing populist fear-mongers over a Christmas tree was an expression of an exaggerated Diaspora mentality that had long been out of place in a consolidated Jewish democratic state like Israel. Those who are secure in their faith, he went on, cannot be scared or put on the defensive by a Christmas tree.

"On the contrary," the deputy minister appealed, "go out and have a look at the Christmas celebrations, which are beautiful and colourful. And it can only be a good thing to learn about and respect other religions." Roll posted his speech on Twitter, setting off a storm of mostly hateful comments. They raise fears that the dispute over Christmas could mushroom into a full-blown culture war under the incoming government.

Home
Print
Newsletter
More on this topic
Haifa's Holiday of Holidays: The festival where everyone is welcomeArabs and Jews in Israel: You can't tear us apartInterview with Israeli philosopher Omri Boehm: The Haifa Republic – full equality for Middle East peace
Related Topics
Arab citizens of Israel, Benjamin Netanyahu, Christianity, Christians in the Islamic world, Christmas, Church, History of the Near and Middle East, Israeli-Palestinian conflict, Israeli-Palestinian dialogue
All Topics

Asmaa al-Atawna's debut novel "Missing Picture" has been published in German translation (Keine Luft zum Atmen – Mein Weg in die Freiheit). In it, she describes life in Gaza from ... END_OF_DOCUMENT_TOKEN_TO_BE_REPLACED

At the end of every year, the team at Qantara.de gives you a run-down of the ten most-read articles on the site over the past 12 months. Here is a quick overview of the stories ... END_OF_DOCUMENT_TOKEN_TO_BE_REPLACED

Palestinian Christians are an integral part of the Palestinian national movement. This is the conclusion reached by the Chilean-born Palestinian political scientist Xavier Abu Eid ... END_OF_DOCUMENT_TOKEN_TO_BE_REPLACED

Jesus – Issa in Arabic – doesn’t merely enjoy the highest place among the prophets in the Koran. He is also revered in Islam’s mystical tradition for his message of love and mercy ... END_OF_DOCUMENT_TOKEN_TO_BE_REPLACED

With reported hostilities against Israeli journalists and the flag of the Palestinian territories flying on the streets and in the stadiums, it is clear the World Cup in Qatar is ... END_OF_DOCUMENT_TOKEN_TO_BE_REPLACED

When is it and when is it not acceptable to display a political banner at the World Cup in Qatar? The answer seems to depend largely on the political message, with fans ... END_OF_DOCUMENT_TOKEN_TO_BE_REPLACED
Author:
Joseph Croitoru
Date:
Mail:
Send via mail

END_OF_DOCUMENT_TOKEN_TO_BE_REPLACED
Social media
and networks
Subscribe to our
newsletter