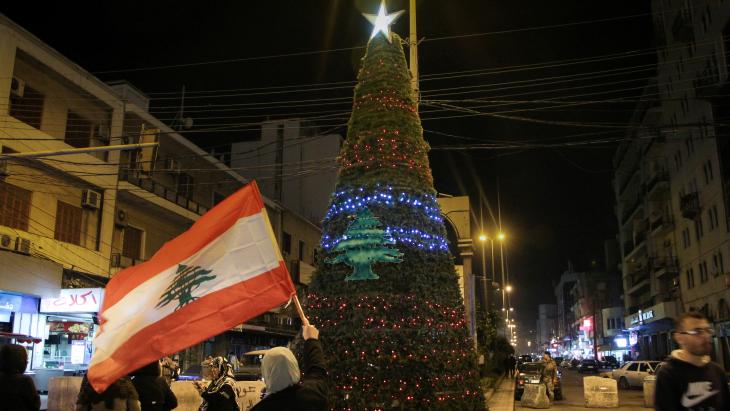 Christmas in Lebanon
Revolution under the Christmas tree

Beirut usually sparkles and dazzles at Christmas time. This year, marked by major protests, however, everything has been turned on its head: there is a distinct lack of Christmas in Beirut, while in Tripoli, a Christmas tree has been erected for the first time ever on the main square, Sahat an-Nour. Hanna Resch reports from Lebanon

Year in, year out, fairy lights, plastic reindeers and Christmas trees are par for the course right across the Lebanese capital – in Christian, Shia and Druze districts alike. After all, as many people here say, Jesus is not just for Christians. This year, however, Christmas in Beirut has lost its lustre. People have other things on their minds. The ever-worsening economic situation has dampened the party atmosphere that so dominated the protests in October and November.

While shops in the city have – like every year – stocked up on mountains of baubles, tinsel, plastic Christmas trees and Santas in all shapes and sizes, sales are sluggish. "This year, we are forcing ourselves to get into the mood for Christmas," says an elderly passer-by.

Even the sparse decorations in the streets seem half-hearted. One couple who are perusing Christmas articles in a shop in downtown Beirut says: "This is the first time that things have been so un-Christmassy in Lebanon. And even if we are looking forward to it, we feel guilty because others have lost everything in the economic crisis."

Christmas on a shoestring

Despite all this, a first small Christmas tree was erected on Martyr Square in Beirut just a few days ago. It's a home-made tree, made out of cut-up plastic bottles. "It's the best we could do given the economic situation," says a woman as she hangs another plastic spiral on the tree. 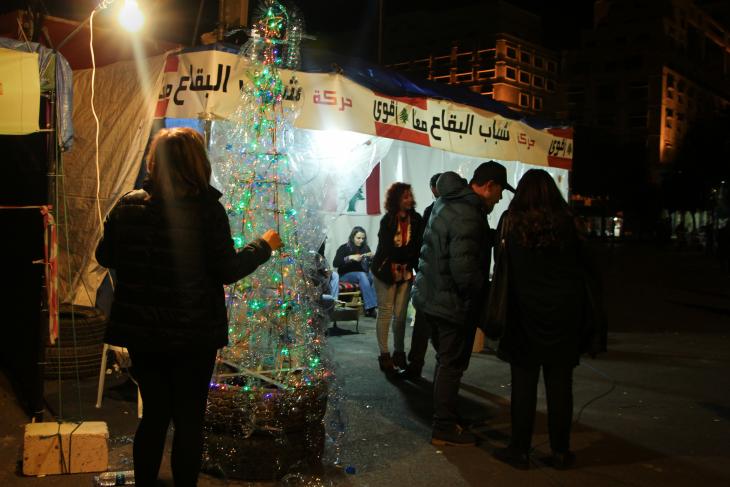 Reflecting the subdued political and economic mood: a first small Christmas tree was erected on Martyr Square in Beirut just a few days ago. It's a home-made tree, made out of cut-up plastic bottles. "It's the best we could do given the economic situation," says a woman as she hangs another plastic spiral on the tree

The Christmas tree on Sahat an-Nour, the main square in Tripoli, on the other hand, looks magnificent. It is not right in the middle of the square, but it is decorated in the colours of the Lebanese flag: red and white with a green cedar. If you ask any Tripoli residents present what the tree stands for, they will say that it stands above all for mutual respect, regardless of religious denomination. Most demonstrators donated a little so that the tree could be purchased. It was decorated by Muslim women – a spur of the moment development.

This is the first time that a Christmas tree has been erected on the main square of what is a predominantly Sunni city. Inspired by the thawra, however, the people have "broken down the barriers of fear between them and the ruling elite," explains Abdel Rahman, a demonstrator in his early twenties.

Moncef Marzouki was Tunisia's first democratically elected president after the fall of dictator Ben Ali. Today he is the most prominent critic of increasingly counter- ... END_OF_DOCUMENT_TOKEN_TO_BE_REPLACED

Asef Bayat, professor of Sociology at the University of Illinois, Urbana-Champaign, has been studying revolutions and how they affect people since 1979. In his recent book, " ... END_OF_DOCUMENT_TOKEN_TO_BE_REPLACED

The 2020 Beirut port blast was a traumatic experience for many people in Lebanon. A large number sought therapy in the aftermath. But, with doctors leaving the country, help is ... END_OF_DOCUMENT_TOKEN_TO_BE_REPLACED

A pandemic, civil strife and an economic meltdown have conspired to bring Beirut's vibrant club scene to its knees. Yet the city needs parties more than ever. Kate Martyr reports END_OF_DOCUMENT_TOKEN_TO_BE_REPLACED

A group of 20 social media influencers in Lebanon is seeking to de-escalate political tensions and overcome sectarian problems. Their outreach is impressive among the young and ... END_OF_DOCUMENT_TOKEN_TO_BE_REPLACED

END_OF_DOCUMENT_TOKEN_TO_BE_REPLACED
Social media
and networks
Subscribe to our
newsletter