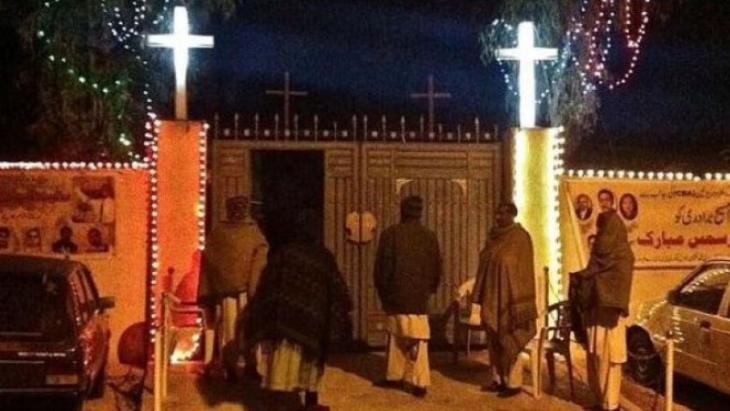 Christmas in Pakistan
In harmony with the Muslim community

Just like all Christians in Islamabad, 45-year-old Akram and his family celebrate "the night of the new moon" also known as "chand raat", every year on 24 December. Nusrat Sheikh joined him

"Happy Christmas!" – "Same to you!" Akram Masih responds with a smile that makes his moustache bob up and down. Akram is 45 years old, married and the father of seven children. Like most of the residents of what is known as France Colony, he works as an assistant and cleaner at the Capital Development Authority, Islamabad's local government authority in Pakistan.

It's shortly before midnight and in the narrow, winding alleyways and uneven pathways of France Colony, a slum situated within a wealthy Islamabad district, a lively, cheerful atmosphere reigns. People are congratulating and hugging each other, some are warming themselves in the icy cold by the wood fire, as there is no gas here. The scent of sweet and hearty food wafts through the chilly air from kitchen fires.

Midnight mass from the loudspeaker

People are singing Christmas carols. The sound of Bollywood film classics can be heard from some of the houses. In the small Protestant church, the pastor utters a few words into the loudspeaker as midnight mass gets underway. The church is well attended by equal numbers of men and women. 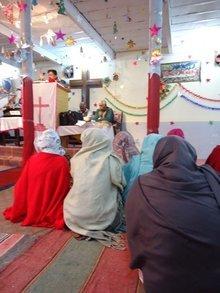 Increasing attention from the media, the general public and the political sphere: Midnight Mass on Christmas Eve at the France Colony church in Islamabad

​​The women are wearing the colourful and traditional Pakistani national dress, known as salwar kameez. Long silk scarves, known as dupatta, provide an extra layer of cover for the chest area in addition to the loose-fitting dresses, and drape easily over the women's backs.

The pastor holds the entire mass in Urdu, the local lingua franca and the national language of Pakistan. The mass is concluded with a recitation of the "Our Father" prayer, the Christmas cake is cut and shared with everyone in the parish church. Musical accompaniment to the mass is provided by a dholak drum and a harmonium.

Akram Masih then leads a group of interested young Muslim Pakistanis directly into the heart of France Colony, to the small community square, to show them the lovingly decorated nativity scene.

The following evening, family members gather at Akram's small house. They sit comfortably and closely together on the bed, on a mattress on the floor and on plastic chairs, or crouch in front of the gas oven, to warm themselves with a cup of Pakistani milk tea.

On this particular evening, Akram's elder brother Petrus is visiting, a man who successfully founded his own local NGO five years ago. Financial support from an international NGO sustains educational and health centres in the neighbourhood.

"Over the last few years, the way people celebrate Christmas has changed. Since the liberalisation of the media landscape in Pakistan during the Musharraf era, our festivals and our community attract increasing attention from the media, the general public as well as the political sphere," says Petrus.

"The local government in Islamabad is making an effort by putting up Christmas trees in various locations in the city and for the first time, organising a Christmas gala. That's why we're trying to explain to the Muslim majority about our faith community and our holidays," explains Petrus. 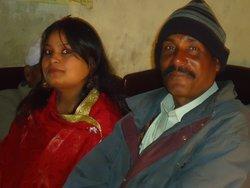 ​​The festivals are also always celebrated together with the Muslims that live in the neighbourhood. Generally speaking, neighbourly relations with Muslims living beyond this residential area have also improved.

Since the foundation of France Colony in the year 1979, the social structure of this community has also changed. There are presently around 650 families living in the settlement, most of them Catholic. Only 15 to 20 households are Muslim. Akram's family is itself Catholic, a fact that he views as irrelevant.

Not all the residents are still working assistants or cleaners, but have set up their own small businesses for example as tailors, craftsmen or food vendors. Some even hold more senior positions in the service of the local government. Educational levels have also improved, with almost all children attending secondary school, and some attending university.

But Pakistan's Christians are still denied numerous opportunities to climb the social ladder, says Kinzia, Akram's eldest daughter. "Social discrimination of Christians in Pakistani society has shown a marked decrease – times really have changed. But our talents are not promoted, which is why we must continue to fight our way up. As Pakistani citizens, however, we can address problems. And sometimes, our voices are also heard."

A lawmaker in Pakistan's rugged northwest was sipping tea with voters when his phone chirped to life – the Taliban were calling with a demand for 'donations'. "We hope you won't ... END_OF_DOCUMENT_TOKEN_TO_BE_REPLACED

The local screening of a Pakistan-produced movie portraying a love affair between a married man and a transgender woman hangs in the balance after the film was cleared by censors ... END_OF_DOCUMENT_TOKEN_TO_BE_REPLACED 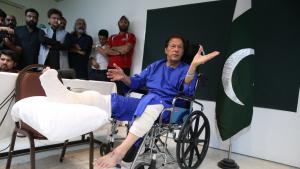 The attempt on the life of Pakistan's former prime minister Imran Khan marks a turning point in the country’s politics. Having come to power in 2018 with the help of the military ... END_OF_DOCUMENT_TOKEN_TO_BE_REPLACED

Sufism has fluid boundaries. Just like Islam, Sufism is inconceivable without its late antique roots. Then again, it has also exerted an influence on Hinduism. Moreover, the Sufic ... END_OF_DOCUMENT_TOKEN_TO_BE_REPLACED

Following the recent brutal attack on Salman Rushdie, famous writers have been reading passages from his works. Torsten Landsberg takes a look at the struggle in 1988 to publish " ... END_OF_DOCUMENT_TOKEN_TO_BE_REPLACED

One year ago the Taliban returned to power, seizing Kabul; the U.S. and its allies made a panicked exit from the country. Of all the books written on the subject, four stand out ... END_OF_DOCUMENT_TOKEN_TO_BE_REPLACED
Author:
Nusrat Sheikh
Date:
Mail:
Send via mail

END_OF_DOCUMENT_TOKEN_TO_BE_REPLACED
Social media
and networks
Subscribe to our
newsletter