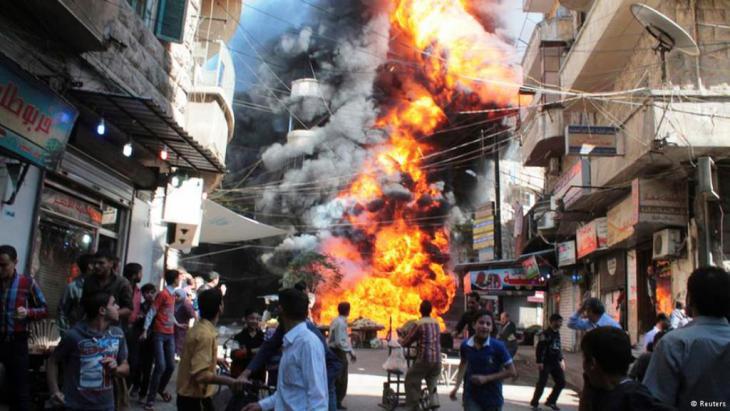 The war waging in Syria, hijacked by opposing ideologies just months after it began, has had an irrevocable impact on the Syrian people. Although not much is heard of Syrians outside the refugee camps, Americans, Europeans, Russians, Turks, Iranians, and Arabs hold meeting after meeting to agree and disagree, coalesce and collide, in an attempt to halt the ″Syrian conflict″. By Hakim Khatib

After five years of the Syrian war, we can recognise ″four″ conflicting parties on the ground – Assad, IS, the rebels and the Kurds. Each one of these conflicting parties has regional and international backers, who ironically do not agree with each other about whom they are fighting for or against.

The Syrian regime is backed by Iran, Russia, Hezbollah and Iraqi militias. IS is backed by a flood of global jihadists from all over the world. The rebels are backed by the Gulf States, Turkey, Jordan and the US. The Kurds are supported by the US.

Despite consistent media references to ″the Syrian conflict, crisis or war″, this surely begs the question, ″What makes this war so Syrian?″ It is in fact a war being waged on Syrian territory, in which more than 50% of Syria′s population have been displaced, over 220 thousand killed, and many more injured or imprisoned. According to Amnesty International, more than 12.8 million Syrian people are in ″urgent need of humanitarian assistance″. Besides this humanitarian catastrophe, most of the country of Syria and its infrastructure have been destroyed.

In March 2011, when people engaged in peaceful protests against the regime, regime forces confronted them with brutality and killed hundreds of civilians in the first few weeks, igniting the beginning of an increasingly bloody death toll. The initial activists were neither ideological nor religious, but rather common people standing up for their rights against political oppression, economic hardship, human rights violations, unemployment, poverty and corruption. 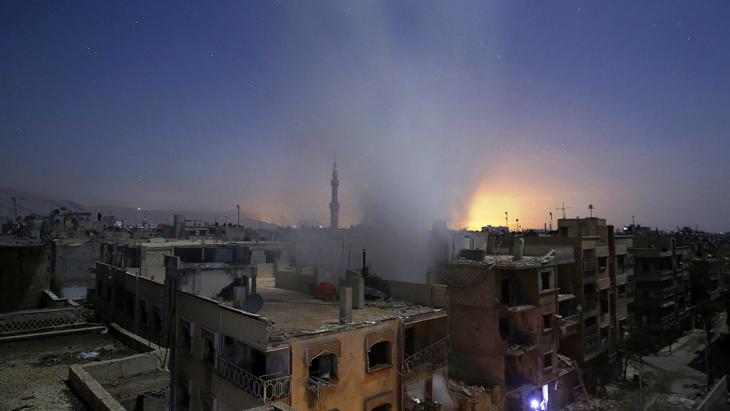 Shoring up the Assad regime: "since the end of 2012, Iran has been flying in troops and supplies to Syria on an almost daily basis. Iran has also provided Assad with significant logistical, technical, financial and military support", writes Khatib

As the Syrian intelligence apparatus, police and the army notoriously became involved in the crackdown on peaceful demonstrations, a series of defections followed to form the so-called Free Syrian Army (FSA) to confront the regime′s brutality. The FSA began to take all those who were willing to fight against regime forces under their command. What had begun as an uprising had now become civil war.

The magnetism of war

Prompted by ideological mobilisation in 2012, jihadists from around the world started travelling to Syria to join the rebels. Assad encouraged this activity by releasing jihadists from jail to vilify rebel groups, especially after the regime had lost control of the northern borders.

In the same year in January, al-Qaida formed a branch in Syria called the Nusra Front to fight against the regime. Around that time, Kurdish groups took up arms to defect from Assad′s rule in a search for autonomy. This year marked the beginning of the proxy war in Syria.

Iran, Assad′s strongest ally, intervened to help Assad. Since the end of 2012, Iran has been flying in troops and supplies to Syria on an almost daily basis. Iran has also provided Assad with significant logistical, technical, financial and military support.

It is estimated that by December 2013, Iran was fielding approximately 10,000 operatives in Syria, including thousands of Iranian paramilitary Basij fighters, Arabic-speaking Shia volunteers and Iraqi combatants. In mid 2012, the Lebanese Hezbollah joined the war against the rebels in Syria. Hezbollah took an active role in battlefields such as Al-Qusair (19 May – 5 July 2013) between rebels and troops loyal to the Assad regime.

In return, Gulf states – namely Saudi Arabia and Qatar – were sending money and weapons to rebel groups, mainly through Turkey and Jordan. Saudi Arabia supports Salafist insurgent groups such as ″The Army of Islam″ under the command of Zahran Aloush. 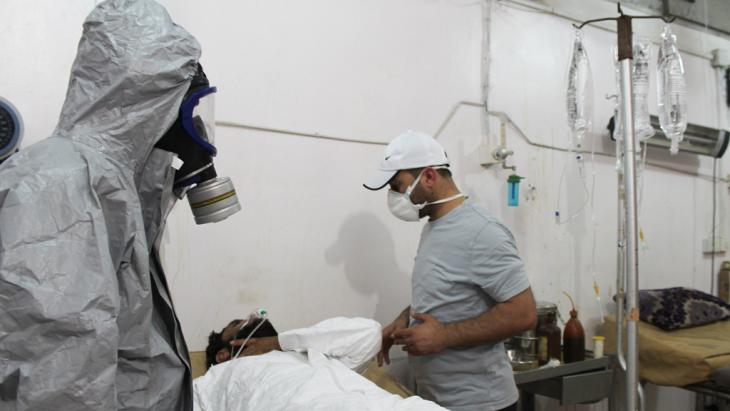 A mobilising of ideologies: many factions - the Assad regime, IS, the rebels and the Kurds - not to mention superpower involvement and foreign financial support have turned the "Syrian civil war" into a war of proxies. The only thing the Syrian population could potentially gain from the conflict would be the toppling of Assad

Unlike Saudi Arabia, Qatar has exerted enormous efforts to support the Muslim Brotherhood and more radical rebels with al-Qaida ties. In order to counterbalance the Saudi influence in Syria, Qatar along with Turkey backed the ultra-conservative Ahrar Al-Sham (10,000 -12,000 fighters) under the command of Hassan Aboud. Paradoxically, the Gulf States have offered no resettlement places to Syrian refugees.

Allegedly horrified by Assad′s atrocities against his own people in 2013, the US authorised the CIA to train and equip Syrian rebels to fight against Assad, thus entering the war on the ground. Controversial figures provided by the Congressional Research Service reveal that Saudi Arabia bought more than $90 billion worth of arms from the US between 2010 and 2015, at a time when the US was urging Gulf States to stop supporting extremists in Syria.

In the same year, Assad used chemical weapons against civilians in rebel-held areas. The OPCW reported to the UN that ″chlorine has been used repeatedly and systematically as a weapon″ in Syria. In September 2013, Obama remarked, ″It is in the national security interests of the United States to respond to the Assad regime′s use of chemical weapons through a targeted military strike.″

A response to the Assad regime dropped off the agenda when Russia, Assad′s long-standing ally, proposed that he surrender control over his chemical weapons to the international community for eventual dismantling. A move that aptly demonstrated the extent of the power struggle between Russia – Assad′s ally – and the US – in opposition to the Assad regime. 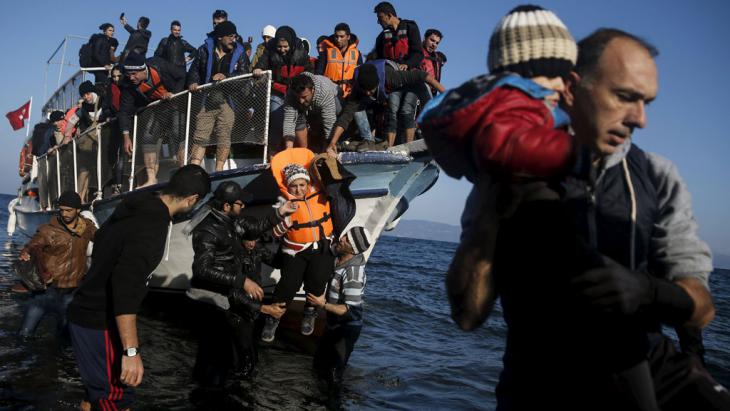 At what cost: more than 50% of Syria′s population have been displaced, over 220 thousand killed, and many more injured or imprisoned. According to Amnesty International, more than 12.8 million Syrian people are in ″urgent need of humanitarian assistance″

In February 2014, IS took control of large areas in Iraq and Syria, attracting foreign fighters from all over the world and ironically becoming al-Qaida′s enemy. Indeed, IS isn′t fighting Assad, but the Kurds and other rebel groups. By 2014, as many as 10,000 and 12,000 foreign jihadists were estimated to be in Syria, more than 3,000 of them originating from Western countries. Consequently, thousands of foreign fighters flood into Syria for jihad every year, accompanied by constant appeals from mainly non-Syrian, Sunni clergymen to support the Syrian rebels.

In September 2014, a coalition under the leadership of the US launched airstrikes against IS on Syrian soil. Once again, the CIA became involved in sponsoring the training of Syrian fighters, specifically intended to take on IS.

While the US and other Western countries made it very clear that they oppose IS more than Assad, Turkey started bombing Kurdish groups, although the Kurds have been fighting against IS since its formation. Owing to existing tensions between Turkey and the US as to who is the primary enemy in Syria, Turkey has not bombed IS to date.

While Assad has been losing ground to IS and the rebels, Russia has intervened on his behalf to bomb IS. On the ground, Russia has been bombing anti-Assad rebels, including those backed by the US.

While Syrians are not much heard outside the refugee camps, Americans, Europeans, Russians, Turks, Iranians, and Arabs are holding meetings to agree and disagree and coalesce and collide to solve the ″Syrian conflict″. According to the US Department of Defence, coalition airstrikes alone conducted in Syria reached 2,680 in 2015, of which 2,540 were by the US and 140 by the rest of the coalition (Australia, Bahrain, Canada, France, Jordan, Saudi Arabia, Turkey and UAE). The fact remains that almost no single Syrian citizen has been left unaffected by the crisis, leaving Syria in a bloody war with no prospects of reconciliation in sight. What′s so Syrian about the Syrian war? Perhaps it is just the humanitarian catastrophe.

The rollout of coronavirus vaccines in the Middle East and North Africa is already taking place on a massive scale, with the United Arab Emirates leading the way. Nevertheless, ... END_OF_DOCUMENT_TOKEN_TO_BE_REPLACED

German Middle East analyst Guido Steinberg and television journalist Ulrich Tilgner have both published new books on the conflicts in the Middle East. Their analyses and their ... END_OF_DOCUMENT_TOKEN_TO_BE_REPLACED

Saudi Arabia and its allies have agreed to set aside their differences with Qatar at a summit meeting of the Gulf Cooperation Council. The restoration of diplomatic relations ... END_OF_DOCUMENT_TOKEN_TO_BE_REPLACED

Ten years after the start of the Arabellion in North Africa and the Middle East, many view the movement as a failure. But rather than being over, it has now entered a more mature ... END_OF_DOCUMENT_TOKEN_TO_BE_REPLACED

A heated debate is raging in the Islamic world about whether the religious and political spheres in Islam are one and the same. Before this matter can be settled, the terms " ... END_OF_DOCUMENT_TOKEN_TO_BE_REPLACED
Author:
Hakim Khatib
Date:
Mail:
Send via mail

END_OF_DOCUMENT_TOKEN_TO_BE_REPLACED
Social media
and networks
Subscribe to our
newsletter