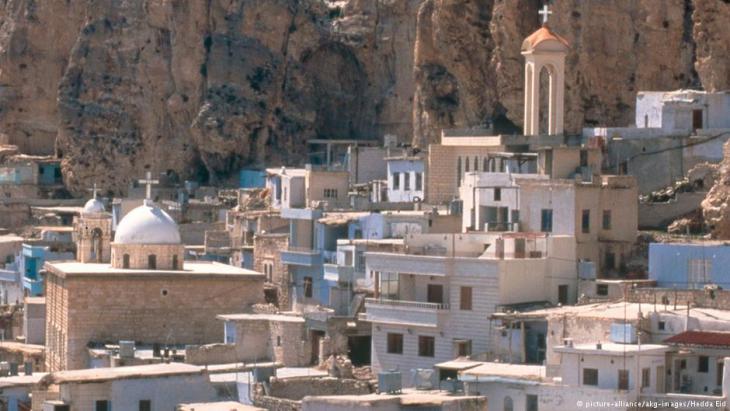 Churches in Syria after the fall of East Aleppo

Time for a new beginning

Christian Churches in Aleppo have welcomed the government troops' victory. But after five years of war, it is important that they abandon the paradigm that the Assad regime is the protector of religious minorities and work tirelessly to overcome the religious divide. By Claudia Mende

After the fall of eastern Aleppo, the Syrian president Bashar al-Assad once again presented himself to the world as the protector of Christian minorities. Official Syrian media published pictures of Bashar al-Assad and his wife, Asma, visiting a monastery in Saidnaya, near Damascus at Christmas.

The Melkite Greek Catholic Archbishop of Aleppo, Jean-Clement Jeanbart, welcomed the victory of government troops, aided by Russia and Iran. He was not alone: other influential patriarchs like Gregory Laham who, as Archbishop of the Melkite Greek Church in Damascus, is the highest ranking Church leader in the country, have never made a secret of their support for Assad.

In numerous interviews with Western media since the start of the war, Laham has defended the Assad regime. He has rejected criticism of Assad, saying that Syria's head of state is a "victim of deliberate defamation". The atrocities committed by the regime and the destruction of large parts of Aleppo are regrettable, he said, but they do not tarnish the positive image of the regime. The use of barrel bombs, chlorine gas attacks, the starvation of whole city districts, and tens of thousands of people in the torture chambers ... the patriarchs have no words of criticism for these things.

Before the conflict began in 2011, Syria's Christians made up around ten per cent of the population. It is not known how many still live in the country. The Christians are divided into eleven different denominations. The largest of these are the Greek Orthodox and Melkite Greek Catholic Churches, the latter being in full communion with the Vatican in Rome.

The Christians are afraid of the jihadists and seek protection from Assad. The fear of the terror brought by Islamic State and other terrorist groups is understandable, especially in view of the fate of Iraqi Christians. Over the last few years in Syria, several priests have been murdered and two bishops have been abducted. Despite this, Assaad Elias Kattan, professor of Orthodox Theology at the University of Münster in Germany, does not consider the attitude of these Church leaders to be credible. He regards their stance as one-sided, empty, and an inadequate response to the fundamental crisis facing the country. "It's a bit like the Muppet Show," says Kattan. "The puppets say nothing, even when they speak." 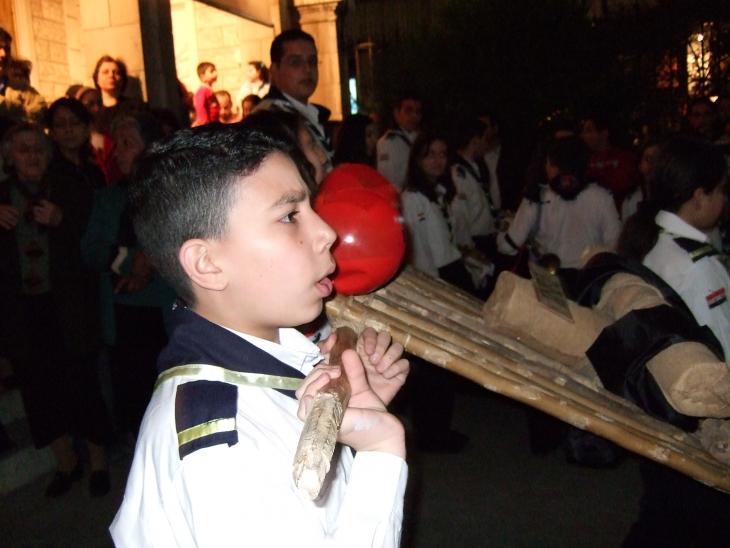 Dissenting voice: Monk Jacques Murad from the monastic community of Deir Mar Musa has said that "those who have been most affected by the violence of Islamic State are the Sunni Muslims" and that while there have, of course, been Christians among the victims, "it is not right and not helpful to represent Christians as the only victims of the war". Pictured here: Christians celebrate Good Friday in a church near Damascus

Not only Christians have suffered

The Church leaders' main focus is on the suffering of Christians. But it is not only Christians who have suffered; the vast majority of Sunni Muslims in the country have their own losses to mourn. "In principle, Christians are in no more danger than their Muslim fellow citizens," emphasises Kattan. "There are not per se more victims among them than there are among Muslims."

Kattan sees the behaviour of Church leaders as a regression to old reflexes from a past during which for centuries, Christians were a minority and relied on powerful protectors. In a crisis that threatens their existence, they fall back on these old patterns and cling to the Assad regime.

Kattan, however, who hails from Lebanon, is adamant that the time has come to urgently question the paradigm of Assad as the protector of religious minorities. He would like to see the Churches engage more in mediation and initiatives for national reconciliation. They should be using their weight to press for political reforms, instead of deepening the rifts between religions, he feels.

Kattan is not alone in his assessment of the situation. After the fall of Aleppo, voices in Syria are also contradicting the one-sided discourse of the Church leaders. In an interview with the Vatican's Fides news agency, the monk Jacques Murad from the monastic community of Deir Mar Musa emphasised that Christians should not portray themselves as the only victims of the war. This is all the more remarkable given that Murad himself was held captive by IS for several months before being freed. "All Syrians are affected by the violence in Syria, Muslims and Christians. Those who are suffering most are the poor, who don't have the option to flee," said Murad on the evacuation of the eastern part of Aleppo. "Those who have been most affected by the violence of Islamic State are the Sunni Muslims." There have of course been Christians among the victims, "but it is not right and not helpful to represent Christians as the only victims of the war. This only leads to a further rise in sectarianism." 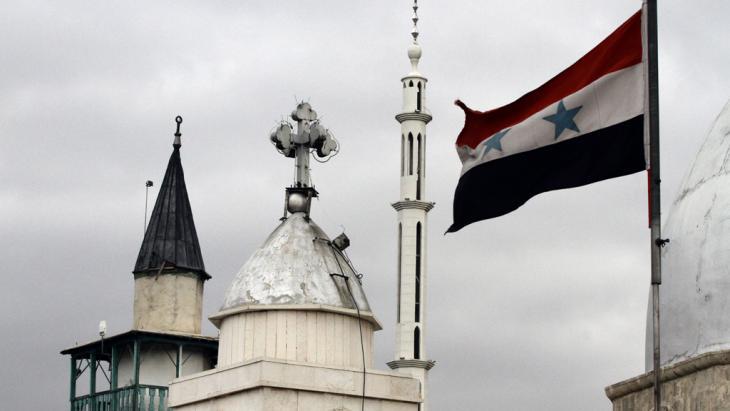 According to Claudia Mende, "the regime has developed sophisticated tactics for keeping minorities close and playing them off against each other. Even before 2011, there was ignorance and reservations beneath the surface, and the government used these sentiments in a targeted manner to deliberately stir up resentment between the religions and make use of the Christians' fear of the Muslims"

How Assad has used religions

Since the start of the conflict, the Syrian regime has taken every opportunity to present itself as the protector of religious minorities in the country. This is why many people – including some in the West – believe that Assad's rule guarantees religious diversity in the country. But in reality, the regime has developed sophisticated tactics for keeping minorities close and playing them off against each other. Even before 2011, there was ignorance and reservations beneath the surface, and the government used these sentiments in a targeted manner to deliberately stir up resentment between the religions and make use of the Christians' fear of the Muslims.

But Christians are not the only ones being used in this way. For decades, the Assads have prohibited any kind of self-organisation among the Alawites, and almost hollowed out the community from the inside.

As far as the Churches are concerned, the regime has managed to gain the support of those at the top of the hierarchy and large sections of the faithful through continual vilification of all forms of peaceful opposition. Since the start of the conflict, most Church leaders have spoken as if they were making statements on Syrian state television. They took on the vocabulary of the regime from the outset, describing peaceful demonstrators as terrorists or armed criminals. In isolated cases, bishops even refused to bury peaceful Christian activists who had joined protests and been killed by the regime. This is what happened to the filmmaker Bassel Shahade, who was killed in Homs in 2012.

"Unfortunately there is a tendency among Christians to behave not as citizens, but as if they were a group requiring the special protection of the regime, or of a foreign power such as Russia or the West," says Assaad Elias Kattan. He feels that Syrian Churches would be well advised to free themselves from the clutches of the regime and work on a vision for a new Syria. "Anything else just serves to further deepen the rifts between the religions."

Home
Print
Newsletter
More on this topic
Christians in Iraq: Between the frontsSyrian Christians and the Assad regime: "Assad is only protecting himself"Abduction in Syria of Paolo Dall'Oglio: A voice of peace in a wilderness of violence
Related Topics
'Islamic State' | IS, Alawites/Alawis, Assad regime, Christians in the Islamic world, Church, Freedom of religion, Racism | discrimination, Syrian Civil War, Syrian opposition
All Topics

The photos of the first Friday prayers in Hagia Sofia in 86 years triggered passionate and diverse responses around the world. Surrounded by a coterie of ministers, Turkey's ... END_OF_DOCUMENT_TOKEN_TO_BE_REPLACED

Morocco officially declared itself a country of immigration in 2013, responding to the growing number of immigrants arriving from sub-Saharan Africa. Since then, tens of thousands ... END_OF_DOCUMENT_TOKEN_TO_BE_REPLACED

As a consequence of the coronavirus pandemic, the Osnabruck Morgenland Festival took place via YouTube for the first time – transporting us to new cultural regions through music. ... END_OF_DOCUMENT_TOKEN_TO_BE_REPLACED

Twelve million Syrians are dependent on humanitarian aid, a sombre figure that conceals much suffering and high costs, of which Europe bears 80%. With an aid shortfall looming, ... END_OF_DOCUMENT_TOKEN_TO_BE_REPLACED

In the age of corona, Ankara's regional power strategy is twofold: on the one hand, Turkey is engaged in a charm offensive to revamp its political image, which has suffered lately ... END_OF_DOCUMENT_TOKEN_TO_BE_REPLACED

END_OF_DOCUMENT_TOKEN_TO_BE_REPLACED
Social media
and networks
Subscribe to our
newsletter