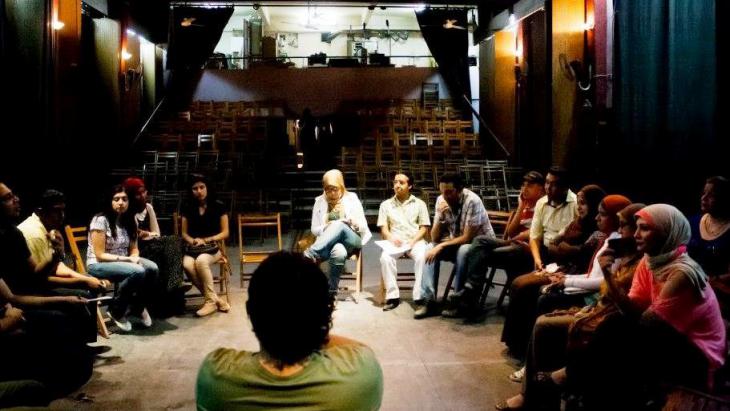 Since the revolution of 25 January 2011, Egypt has seen a resurgence of its cinema clubs: places where fans of the "seventh art" (Alain/Schelling) meet, mostly in cultural centres, to watch films together and discuss them afterwards. Islam Anwar reports from Cairo

The first cinema clubs in Egypt emerged in the 1960s and experienced their heyday in the two decades that followed. Interest waned in the 1990s and was only rekindled in the last 10 years, ironically in a highly technological era when films are available for free 24/7 and people can view them at home on their computer or television screens.

But many people, first and foremost youngsters, still enjoy the special experience that is watching a movie together with other like-minded individuals, something made possible by the cinema club. By stepping away from their hectic daily lives, people are again able to take some time – not just to enjoy a film, but also for themselves and others.

Hassan Sharawy is the organiser of the Jesuit Cinema Club in Cairo, which has taken place every Saturday for seven years: "We began screening films at the Jesuit Cinema Club in 2009. We were initially inspired by the idea of the cinematheque – an archive for films. Our aim was to erode the dominance of the US film with a wide variety of movies, to open the door to movies made by other societies, for example African, Latin American and Iranian films, as well as providing a much-needed forum for the screening of documentary and short films."

On the selection and the quality of the films screened at Sharawy′s club, he says: "We′ve dedicated several of our events to films by major international directors such as Stanley Kubrick, Martin Scorsese, Walter Salas, Abbas Kiarostami and Bela Tarr. We also screen films that have won international prizes such as the Oscar or the Palme D′Or. When we show Egyptian and other films in Arabic, we invite the filmmakers so that the audience and members of the Cinema Club can talk to them." 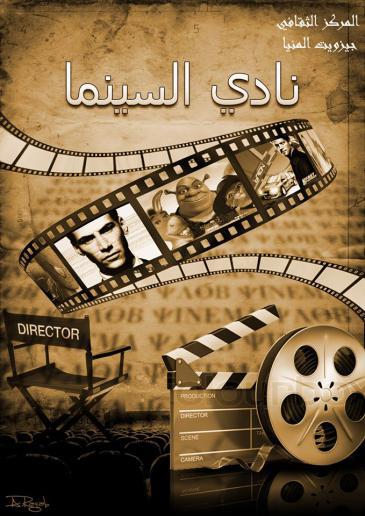 The fascination of the "Cinema Club": many people, first and foremost youngsters, still enjoy the special experience that is watching a movie together with other like-minded individuals, something made possible by the cinema club. By stepping away from their hectic daily lives, people are again able to take some time – not just to enjoy a film, but also for themselves and others

Just as it always has been since the early days of the Jesuit Cinema Club, each screening is followed by a talk, during which a film is "analysed, criticised, deconstructed and put back together again," says Sharawy, who adds: "The discussion brings to light abilities in the youngsters that form the core of art criticism."

Islam Othman, a young man from Alexandria, has been engaged in a variety of social development projects for years. Several months ago, he decided to found a cinema club, where he now screens a film every month before discussing the movie with the audience.

Speaking about his experience and motivation, Othman says: "Alongside my work in social development projects, I am a big film fan. I recently realised that development and creativity must be linked together because art plays an important role in the development of the individual and society as a whole. So I decided to open a cinema club, because a lot of people like the cinema and film is an effective way to convey messages, thoughts and feelings in a concise and succinct manner."

The innovative aspect of Othman′s cinema club is its mobility; it takes place at various locations across Alexandria: "Right from the outset I wanted to ensure that the club is not tied to a particular cultural centre or place. Most of the clubs are held in the city centre, meaning all the other areas miss out. That′s why it was important to have a mobile club like this one. Social media like Facebook and WhatsApp helped me get in touch with people."

Othman talks about some of the most memorable film events at the club: "We screened the movie ′Animal Farm′ based on George Orwell′s novel. Audience interaction was huge, because everyone sensed how the film reflected the current political and social reality of Egypt. We also screened the Egyptian film ′Al-Hubb fawqa hadhba al-haram′ (Love on the Pyramids Plateau) and the ensuing discussion covered the themes of love, freedom, social boundaries and norms and backward traditions." Together with friends, Othman plans to realise the mobile cinema club idea in other districts in the near future. You don′t need much, he says, just a plastic screen, a computer and a small room.

Surprisingly, interest in cinema clubs is not limited to cultural associations and centres. Restaurants have also discovered the concept for themselves, as a way of attracting customers, for example the "Eish wa Malh" in downtown Cairo. The restaurant has joined forces with the Cinematheque for Alternative Film and organises a monthly "film dinner". Guests dine while watching a classic Arab or international film and after the screening, diners can discuss the movie with cinematheque organisers.

Not only do these film nights create an atmosphere of security, human warmth and contentment, say the organisers, they also boost dialogue and interpersonal relationships among the guests. Additionally, special events such as these, which people generally remember for a long time, could also serve to attract other social groups to the cinema club concept.

Sisi’s mismanagement has plunged the country into crisis. Both political and economic reform is needed to save it, writes Abdelrahman Mansour END_OF_DOCUMENT_TOKEN_TO_BE_REPLACED

The devaluation of the Egyptian pound combined with rising food prices is taking its toll on Egypt. More and more people are slipping into poverty. Karim El-Gawhary reports from ... END_OF_DOCUMENT_TOKEN_TO_BE_REPLACED

Egyptian Sufis have been on the defensive against the country's Islamists for decades. Meanwhile, interest in mysticism is growing among the young members of Cairo’s middle and ... END_OF_DOCUMENT_TOKEN_TO_BE_REPLACED

Abortions are illegal in Egypt unless they are necessary to save a married woman's life. But that doesn't stop local women from having one. Egyptian society needs to acknowledge ... END_OF_DOCUMENT_TOKEN_TO_BE_REPLACED

Food prices doubled, salaries halved, banks restricting withdrawals: Egyptians now have the same problems as the Lebanese. But if things get worse here, the fallout will be far ... END_OF_DOCUMENT_TOKEN_TO_BE_REPLACED

Giessen, Eichsfeld, Kusel, Berlin – cars bearing old German number plates are the latest trend on the streets of Cairo. Many Egyptians regard the discarded plates as chic. What ... END_OF_DOCUMENT_TOKEN_TO_BE_REPLACED

Comments for this article: Rediscovering the silver screen

Unfortunately with the invasion of Iraq in 2003 and the ousting of the despotic regime of Saddam Hussain , the Shia islamists in Basra forced their politics on the open city and once centre of different cultural activities. The owners of the remanant cenimas from the 1970s, 3 out of 10, either were threatened to close or feared any assults and attacks. The cinemas turned into shops of modern fashion for men.

END_OF_DOCUMENT_TOKEN_TO_BE_REPLACED
Social media
and networks
Subscribe to our
newsletter