A Small Cinema is Big on Reconciliation

It was once one of the loveliest cinemas in Palestine, then spent years as a ruin: Cinema Jenin. Now, a German has rebuilt it with the support of the Goethe Institute. In August, a movie theatre showing far more than films will open in the northern Palestinian city. Maxi Leinkauf reports from Jenin 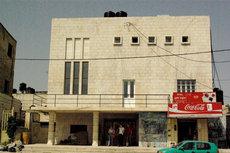 A project to rebuild Palestine – or an instrument in line with Israeli propaganda? The Cinema Jenin project raises hopes, and opposition

​​ Marcus Vetter, the German director, is sitting in the tier of the still rather empty cinema, talking on the phone. He seems nervous. Up front on the stage a young Palestinian is sitting in front of his open laptop working on a trailer that needs to be finished quickly. Rows of chairs and the screen are still missing; most of the equipment is now on its way here in containers.

Everything needs to be set up by the beginning of August, when what was once the West Bank's handsomest cinema is scheduled to reopen. Salam Fayyad, the Palestinian prime minister, has promised to come, and former Pink Floyd musician Roger Waters wrote a song for it. "Heart of Jenin," the documentary made here, for which Marcus Vetter just won a German Film Award, will be screened.

The film tells the true story of a father whose 11-year-old son was shot by Israeli troops. In spite of this, he decided to donate his son's organs to save the lives of Israeli children. Marcus Vetter, who discovered the ruins of the cinema during an evening walk, was excited about the idea of renovating it. He sought out like-minded helpers and visited the cinema owner.

Dr. Lamya is sitting on his broad patio, his eyes scanning the olive grove stretched in front of him. The oil he harvests is delicious, he exclaims, just like it was in his grandfather's day. His wife, her hair streaked with blonde highlights, serves homemade mint lemonade. Lamya's father had the cinema built in the early 1960s, when it was possible to see Indian and Egyptian action films or Hollywood B movies for 5 shekels (about 10 euro cent). Then came the outbreak of the first Intifada in 1987 and the cinema was forced to close down.

"This is much more than just a cinema": Dr. Lamya, former owner of the cinema and supporter of the project

​​ In 2008, Marcus Vetter, the peace-loving German, arrived, "but my brother gave him a hard time," explains Lamya. He demanded tough conditions, insisted on lifelong privileges and did not believe that the cinema could turn a profit. "Although it is far more than just a cinema," Lamya continues.

The plan is to surround the cinema with a small film and media industry: its own film school, a dubbing studio, editing and video workshops, a video library, an open-air cinema and a café with a garden.

On the first floor of the cinema, the Goethe Institute will set up a media lounge: a special multimedia film library with a large selection of DVDs, with computer workplaces and internet access, and two wide-screen televisions with a sound system. The German Foreign Office is offering vital support for the project with its Future for Palestine programme.

A room for German courses is planned. Demand is growing even among the young generation from the Jenin refugee camp. Until now, the one German teacher has been teaching her classes in the nearby cinema office.

The operators of Cinema Jenin hope to soon earn money with advertisements by local businesses displayed on an LED screen. In addition, the cinema will run on solar power in a pilot project. In April, the Brandenburg firm B 5 Solar donated the cinema's first panel.

The future of the town's SMEs lies in solar energy – not only in this city, but across the entire West Bank.

To the sun, to freedom?

Not everyone is so enthusiastic about the project. At the beginning, Juliano Mer Khamis vehemently fought this attempt at normalcy. He is sitting in an oriental armchair in his plain office in the Freedom Theatre of Jenin's refugee camp. He wears a three-day beard, black t-shirt and jeans, and offers his guests an espresso. His shelf is stacked high with DVDs of Kinski films by Werner Herzog, European plays, Hamlet, and Shoppen und Ficken – provocative productions.

Writing on the wall of the cinema: The project has even gained the support of Pink Floyd veteran Roger Waters

​​ His Jewish mother married a Palestinian Communist and came to the camp, where she founded a theatre for children and young people. In 1993 she received the Alternative Nobel Prize for her work. In 2002, when Israeli tanks flattened the camp, the theatre was also completely destroyed.

"The disease of the occupation is in our bones"

Nowhere was the resistance tougher, nowhere did they fight more bitterly against the occupation. Jenin was the stronghold of suicide bombers and terrorists. Juliano Mer Khamis knew most of them when they were children. He rebuilt the theatre and is keeping it running again. He wants to support his German colleagues and the cinema project, but it's intolerable "for our partners to cooperate with the Israeli propaganda," as was written in an open letter to Marcus Vetter, who is seeking out a dialogue with the Israelis.

Juliano Mer Khamis rages at apartheid, the electric fence, unemployment and the checkpoints now surrounding the erstwhile "garden city of Palestine". "We have the disease of the occupation in our bones: How can you start talking about normal life?" he cries. Art is not there for reconciliation, but is an instrument for passive resistance.

Sakaria Zbeidy is perched on the stairs of the newly built guesthouse a few steps away from the cinema. The smoker's face is covered with black marks. "They're from a bomb that exploded next to me," he explains calmly. The former leader of the Al-Aksa brigades, the military arm of the Fatah movement, was at the top of the Israeli army's hit list. He gave up, he's alive, but is now under the supervision of the Palestinian authorities and may only visit his family in the daytime.

Sakaria Zbeidy grew up in the refugee camp of Jenin. He represents the past and now also the turned face of the city that wishes to reinvent itself. As if that were so easy.

Marcus Vetter walks by and pats him on the shoulder. The German sees in him one of the future managers of the cinema. "Sakaria is courageous. With him we can reach out a hand to Israel." He still dreams of it: a small cinema that is big on reconciliation. The first step has been taken: the cinema will open and a beginning has been made. Yet what will happen when Marcus Vetter is no longer here?

It should remain chaotic, he says, crazy, creative and spontaneous. He sounds like a visionary, but the Palestinians who take it over then must first find their roles. They now have a place for them.

Documentary: "The Heart of Jenin"
Donation across the Divide
The challenging and complex issue of "rapprochement in the Middle East" has been the subject of countless books, films and works of art. Now, prize-winning German director Marcus Vetter has entered the fray. His documentary film Das Herz von Jenin (The Heart of Jenin) makes a unique contribution to the ongoing treatment of this theme. Rasha Khayat saw the film

Interview Michel Khleifi
Film as a Political Work of Art
In the summer of 2002, Palestinian director Michel Khleifi and the Israeli director Eyal Sivan traveled along the border determined by UN Resolution 181 in 1947, according to which Palestine was to be divided into two states. From this trip they created a film that will soon be shown in Berlin. Youssef Hijazi spoke with Michel Khleifi

Theatre in the West Bank
Fragments of Freedom
Most of them have never been outside their refugee camp on the West Bank. But now the Palestinian theatre students of the "Freedom Theatre" are discovering Germany and Austria. Kristin Hendinger went to see their most recent play, "Fragments of Palestine"

END_OF_DOCUMENT_TOKEN_TO_BE_REPLACED
Social media
and networks
Subscribe to our
newsletter