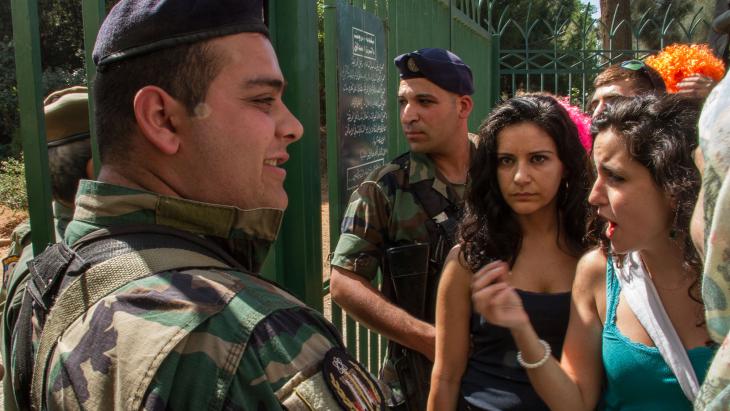 In June this year, Beirut′s largest green space, Horsh Beirut, re-opened to the public after an extended period of closure. Thanks to a strong campaign led by the NGO Nahnoo, citizens are once more able to enjoy strolling under the pines. By Changiz M. Varzi

For about 24 years Lebanese citizens needed to be non-Lebanese to set foot in the largest park and pine forest in the country′s capital, Beirut. More precisely, prior to 6 June of this year, only Westerners and well-connected people were allowed to stroll through the city′s biggest public green space, Horsh Beirut.

But it wasn′t always like this. Ziad al Horly, a 30-year-old lawyer from Beirut, recalls how one day back in around 1992, his father drove from the Ras al Nabaa district to Horsh. It was the beginning of the post-civil war era in Lebanon; Beirut citizens were once again beginning to move freely through the city without fear of deadly checkpoints and pitiless snipers.

″There was no fence around the park,″ Al Horly remembers. ″The paths were muddy and there was no grass anywhere. But still, it was good because we could play around and our parents could walk under the pine trees.″

On 6 June when the 24-year prohibition was finally lifted, Horly was able to enter Horsh again and recall his memories of the park. This triangular green space is located along the lines that separate the Christian district of Ain al-Remmaneh, the predominantly Sunni neighbourhoods of Ras al Nabaa and Tarik al Jadidah and the southern Shia suburbs of Dahiah. 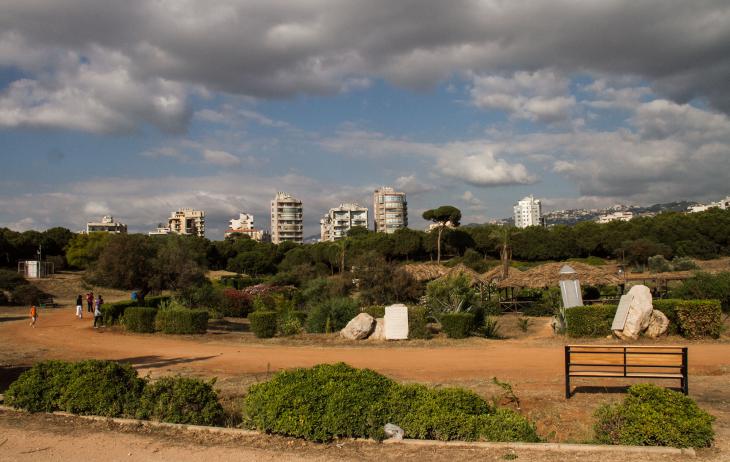 Promoting social cohesion: ″you need public spaces and cultural bridges to foster social inclusion. Horsh is one of these bridges, providing people with the space they need to meet up and talk. This sort of communication promotes the mental and psychological health of society as a whole,″ explains Mohammad Ayoub, executive director of Nahnoo

Some say the park′s sensitive location was indeed the reason behind its closure in 1992. Being positioned at a cultural and religious intersection is no privilege in a fragmented society like Lebanon, where all political and social interaction is defined along sectarian lines. However, social activists strongly object the assumption that the park′s location could lead to sectarian conflict.

″Horsh is the perfect place for people of different sects to communicate and socialise,″ says Mohammad Ayoub, executive director of the NGO Nahnoo, which headed up the campaign to re-open Horsh Beirut.

″One of our goals in Nahnoo is to promote social cohesion in Lebanese society,″ Ayoub adds. ″You need public spaces and cultural bridges to foster social inclusion. Horsh is one of these bridges, providing people with the space they need to meet up and talk. This sort of communication promotes the mental and psychological health of society as a whole.″

It wasn′t easy to persuade the Beirut municipality to accept the social activists′ argument about the constructive role of public spaces in post-war societies. The re-opening of Horsh is the result of five years of tireless and elaborate planning, holding workshops, organising protests, exerting pressure on the municipality and negotiating with stakeholders.

Even after the re-opening, Horsh′s gates are only open to Lebanese during the week from 8 a.m. to 2 p.m. If you try to pass through the park entrance on a hot summer evening, the security guards in drab olive uniforms coolly assess you for blondness. Reclining lazily in their chairs scattered in the shade of the tall pine trees, the guards will not allow in anyone who fails the blondness test. 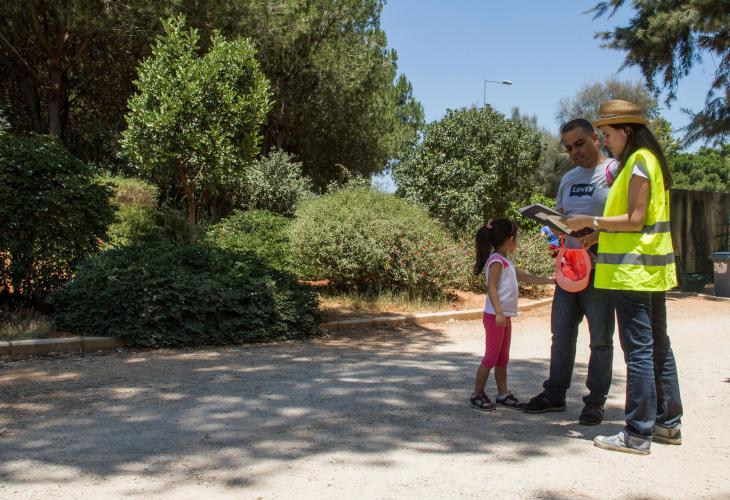 Fate akin to that of Lebanon: "everyone came, took a piece of Horsh and left. In centuries gone by, the pine trees were felled to build boats for the Crusaders′ army. Then came the turn of the Ottomans, who in 1917 decided to clear the pine trees to create space for a casino," writes Varzi

On weekends, the park′s opening hours extend to 7 p.m., while guards in huge armoured vehicles patrol its narrow dusty pathways. Last year, an NGO donated a number of bikes to the patrol unit, but its members have yet to show any interest in cycling. Indeed, the bikes can be found languishing under a thick layer of dust just insider the entrance to the park.

Horsh also has its own ″Berlin Wall″. This is the name that 34-year-old Joana Hammour has given to the fence that separates the southern part of the park – under the control of Shia forces – from the northern government-controlled quarter.

″The younger generation was not even aware that this green space belonged to the public prior to its closure in the early 1990s,″ says Hammour, a staff member in Nahnoo who co-ordinates young volunteers to distribute leaflets about the park among the weekend visitors. ″If we go back in history we see that Horsh was Beirut′s main spot for celebrating public holidays such as Eid ul-Fitr. This is why the green space was also known as Horsh al-Eid,″ she adds.

The history of Horsh is akin to the fate of Lebanon: everyone came, took a piece of it and left. In centuries gone by, the pine trees were felled to build boats for the Crusaders′ army. Then came the turn of the Ottomans, who in 1917 decided to clear the pine trees to create space for a casino.

The French, though, had other interests and preferred the idea of a racecourse in Beirut. In 1921, more of the forest was cut down for horse-racing. After Lebanon′s independence, the civil war started, which was another factor in reducing the pine forest – recorded in 1696 as covering 1,250,000 square metres – down to 300,000 square metres in 2016.

Despite all these losses, Nahnoo′s victory of returning a public space to the residents of Beirut has raised hope for the fledgling civil rights movement in Lebanon. 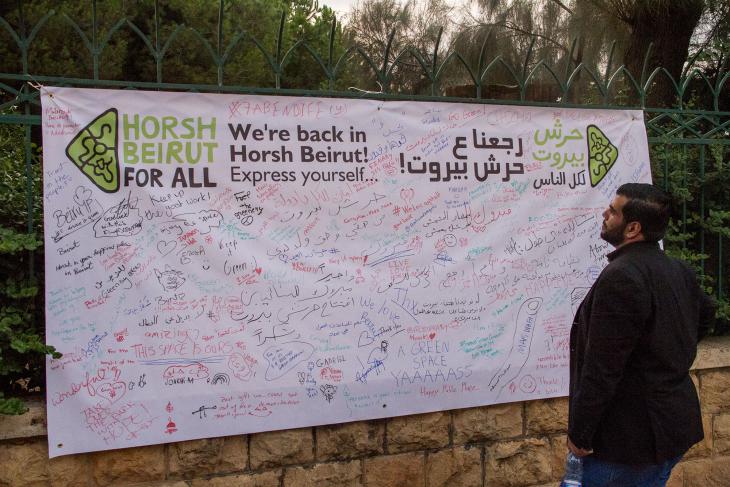 Power to the people: "in the campaign for Horsh Beirut, we have created a model for change in our society. Reclaiming Beirut′s public space is a tactic for us in the realisation of bigger goals, engaging the citizens of Beirut in what happens to our city," adds Ayoub

″These are small steps towards more important aims,″ explains Ghassan Massary, a founding member of a civil campaign to protect Beirut′s Dalieh public seashore from privatisation. ″Through these steps people have become aware of the immediate need to take action for their rights. Our demands not only relate to Dalieh or other public spaces; we are fighting against corruption and for our civil rights and the need for social change.″

Since 2009, the only elections in Lebanon have been last May′s municipal elections that kept the traditional power holders in office. While Lebanon′s paralysed political system cannot even choose a president for the country, civic activists have adopted alternative tactics to effect change in the governing system.

″In the campaign for Horsh Beirut, we have created a model for change in our society,″ says Ayoub. ″Reclaiming Beirut′s public space is a tactic for us in the realisation of bigger goals, engaging the citizens of Beirut in what happens to our city.″

In Lebanon, the local currency has slumped to a record low, people are losing their jobs and the price of food is skyrocketing. Despite the threat posed by the coronavirus, ... END_OF_DOCUMENT_TOKEN_TO_BE_REPLACED

With social distancing impossible in tents, a coronavirus outbreak in one of Lebanon's Syrian refugee camps would quickly turn catastrophic. Yet, many Syrians have more ... END_OF_DOCUMENT_TOKEN_TO_BE_REPLACED

Lebanon's economy is imploding and with it social stability. While the country’s politicians understand the depth of the crisis, they have used the coronavirus lockdown, argues ... END_OF_DOCUMENT_TOKEN_TO_BE_REPLACED

Churches in the Middle East – Coptic, Eastern Orthodox, Maronite – typically share the conservative values of their Islamic surroundings. Yet the resistance of Arab Christian ... END_OF_DOCUMENT_TOKEN_TO_BE_REPLACED

According to the latest Reuters tally, more than 2.54 million people are now reported to have been infected by the novel coronavirus globally and 177,004 have died. As Muslims ... END_OF_DOCUMENT_TOKEN_TO_BE_REPLACED

Plagued by troubled state-citizen relationships on the one hand and conflict on the other, states in the Middle East could discover new uses for COVID-19 lockdown measures. By ... END_OF_DOCUMENT_TOKEN_TO_BE_REPLACED
Author:
Changiz M. Varzi
Date:
Mail:
Send via mail

END_OF_DOCUMENT_TOKEN_TO_BE_REPLACED
Social media
and networks
Subscribe to our
newsletter