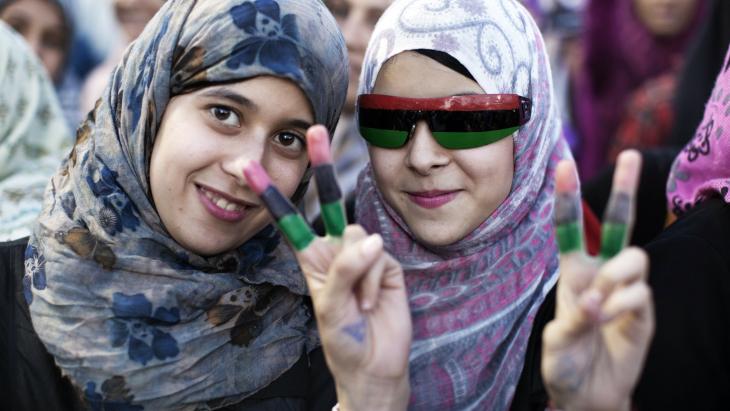 Libya is disintegrating into chaos and lawlessness. Women who stand up to those in charge of the country end up fearing for their lives, even though it is these very women who could bring stability to the country. An analysis by Andrea Backhaus

It could just as well have been her, says Rida al-Tubuly, adding that she is simply lucky to still be alive, lucky not to have been killed like Hanan al-Barassi.

It has been six weeks since the assassination of Hanan al-Barassi. For weeks afterwards, many people in Libya continued to express their outrage. People like the human rights activist Rida al-Tubuly, who lives and works in the Libyan capital, Tripoli, and fights for a society where Libyan women can live in safety. "People who question those in power in Libya are putting their lives at risk," she says on the telephone. "This is especially true if you are a woman."

Lawyer Hanan al-Barassi was assassinated on 10 November in the eastern Libyan city of Benghazi. It was the afternoon, and the 46-year-old had gone out to do some shopping. She had just parked her car outside a shop when masked men stepped up to her car and shot her in the head. Human Rights Watch has described the assassination as a "cold-blooded execution".

"Hanan al-Barassi was brave," says Rida al-Tubuly. "She addressed even the thorniest topics." Al-Barassi was vocal in her denunciation of the abuse of power by the ruling militias in her country. She accused armed groups of sexual attacks and criticised the despotism of the warlords and those faithful to General Khalifa Haftar and his Libyan National Army, which controls the eastern part of the country. In response, she received death threats. On the day she was killed, al-Barassi hinted in a video that she would soon go public with details about the corrupt networks of one particular armed group. Prior to that, she had said that members of Haftar's family were involved in corruption

Rida al-Tubuly explains that in Libya, men are elevated to the important positions because they promise their supporters benefits. Women, on the other hand, stand up for things like human rights and the rule of law. "And for that, they receive threats." All across the country. 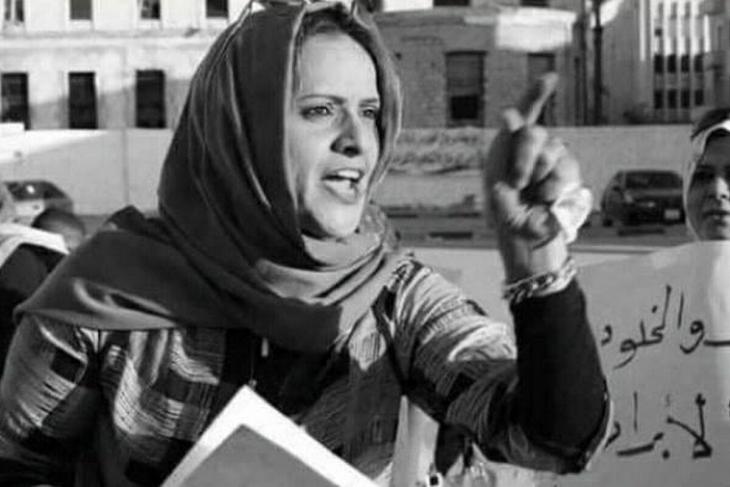 A life for democracy and human rights: in recent years, the Libyan human and women's rights activist Hanan al-Barassi had repeatedly criticised the corruption and nepotism in the militias and violence against women in Khalifa Haftar's sphere of power. On 10 November 2020, the 46-year-old lawyer was shot dead in the street in Bengazi. Before her death, al-Barassi had attacked commanders of Khalifa Haftar's "Libyan National Army" for abuse of power in a mobile phone video

A country disintegrating into chaos

Since the overthrow of Muammar al-Gaddafi, Libya has been split down the middle. On the one side is the UN- and EU-recognised Government of National Accord under Prime Minister Fayez al-Sarraj in the capital, Tripoli. The GNA is also backed by Turkey and Italy. On the other is General Khalifa Haftar, who has the backing of a number of countries including Russia and, to a certain extent, France. Add to the mixture dozens of militias, clans, foreign mercenaries and Islamist groups that are all jostling for power.

Haftar's rebels control large swathes of the country, ruling with an iron fist. For just under a year, Haftar's troops advanced on Tripoli; in the summer, his offensive collapsed. But this did not bring the country any peace.

For years now, the reports coming from Libya have been grim: not only because the country is disintegrating into chaos and lawlessness, but also because people who have fled there from southern Africa are being tortured, abused and enslaved. Little attention is, however, paid to the struggle of those Libyans who uncover wrongs, injustices and maladministration in Libya and want to see progress in their country – and who risk their lives to do so.

Rida al-Tubuly knows what that means. The 58-year-old human rights activist is professor of pharmacology at the University of Tripoli and has been working for equality for decades. In 2011, she and three female students set up the organisation "Together We Build It", which seeks to empower women to get involved in society and politics.

For example, Al-Tubuly and her colleagues are pushing the Libyan government to implement Resolution 1325, which was passed by the UN Security Council in the year 2000. This resolution calls on countries to grant women in war zones an active role in peace-building and peace-keeping. "This resolution was the first time that it was officially acknowledged that although it is women who suffer most in wars and conflicts, they are generally excluded from the peace process," says al-Tubuly. She says that it is not easy to remind the government that it is bound by the resolution.

Amnesty International denounces the assassination of lawyer Hanan al-Barassi, who was shot today in Benghazi in public. Hanan has been vocal in criticizing the corruption of several individuals affiliated to the armed groups in Eastern #Libya (1/3). pic.twitter.com/ER5HUXlLib

Last year, al-Tubuly spoke to the UN Security Council in New York about the precarious situation of Libyan women. In her speech, she criticised the men in positions of power in both the east and the west of the country. She told the council that the assassination of women politicians and activists was an everyday occurrence under both leaderships, and that women were being excluded from social and political life. For this, she received death threats in her native country. The Libyan television channel Alhadat even dismissed her as a spy and a traitor. Even acquaintances phoned her up and asked her whether it was true that she was an agent.

Arab youth express their hopes and wishes for the New Year, spanning everything from civil and political rights, to education, to arts and culture. By Rafiah Al Talei END_OF_DOCUMENT_TOKEN_TO_BE_REPLACED

Ankara is seeking to improve its relations with several states in the Middle East – such as the United Arab Emirates, Egypt and Israel. There are several reasons for this. ... END_OF_DOCUMENT_TOKEN_TO_BE_REPLACED

Despite Syria's lengthy civil war, dictator Bashar al-Assad is now being courted by many governments in the Middle East as if nothing ever happened. The reasons for this vary. By ... END_OF_DOCUMENT_TOKEN_TO_BE_REPLACED

Racism exists in the Arab world. People with dark skin are discriminated against and often see their rights curtailed. Activists have had enough of such treatment and are starting ... END_OF_DOCUMENT_TOKEN_TO_BE_REPLACED

Unauthorised immigration to Europe went down at the peak of the pandemic. As EU countries re-open, migrant flows are back up. What does it mean for the EU – and for migrants? By ... END_OF_DOCUMENT_TOKEN_TO_BE_REPLACED
Author:
Andrea Backhaus
Date:
Mail:
Send via mail

END_OF_DOCUMENT_TOKEN_TO_BE_REPLACED
Social media
and networks
Subscribe to our
newsletter