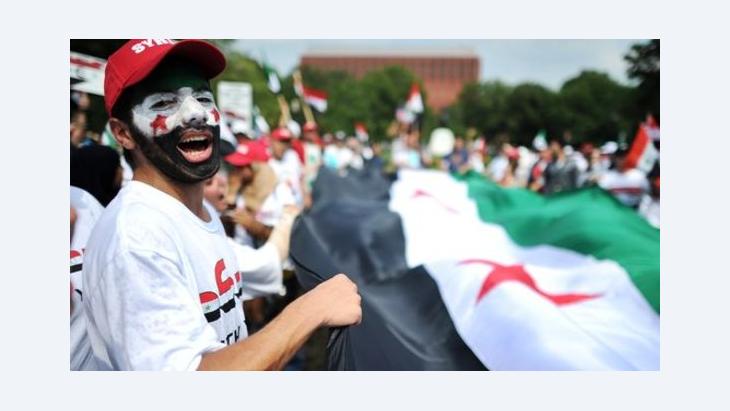 As the military conflict in Syria continues to escalate, the commitment of many peace activists and creative professionals in Syria is going more or less unnoticed by the media and in western public consciousness. An essay by Astrid Kaminski

﻿"The Syrians have developed a new kind of revolution – bold, but peaceful," wrote Rafik Shami in his enthusiastic preface to the German edition of "A Woman in the Crossfire," Samar Yazbek's chronicle of her experience in the Syrian resistance in the four months before her flight to France in July 2011.

By the time that German edition came out, in March 2012, with the title "Schrei nach Freiheit" ("Shout for Freedom"), it seemed clear to most people outside the country that Syria was already in the middle of a civil war.

In her book, Yazbek warns against describing the fighting as a civil war, since that would only play along with the definition that President Bashar al-Assad's dictatorship wanted to give, but the warning already sounded anachronistic back then.

Three months later, that attitude seemed downright romantic when it was repeated by the Syrian journalist Amer Mattar in an interview with a German newspaper. He himself had had to flee to Germany, but quoting him with such a view seemed like revealing him to the public as naïve and unrealistic.

Commitment for the idea of peaceful change 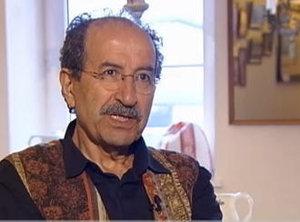 Rafik Shami: "The Syrians have developed a new kind of revolution – bold, but peaceful." Syrian artists and intellectuals are having a hard time acknowledging how the nature of the uprising has changed over the last two years

​​Since then, the "new kind of revolution" and the "shout for freedom" seem to have been smothered further. The news we receive is news from the front – it tells of record numbers of victims after severe "weekend fighting", alarming reports of the militarisation and Islamisation of the opposition, references to the Al-Nasra Front, photos of fighters behind the barricades, stories about disagreements between the nations of the world as to what to do about the crisis.

In spite of that, all the time, it's been known that the demonstrations have not ceased since the beginning of the resistance. In fact, they have spread, and many people are still working with great commitment for the idea of a civil society and peaceful change. They've started newspapers and student movements, built up democratic structures in local committees, written songs, put on YouTube puppet theatre shows, painted clever posters, or tried to respond to the situation in some other artistic way.

But this movement receives less and less attention. As the writer Rosa Yassin Hassan puts it, "The Syrian revolution has become an orphan." Few people have noticed the excellent book edited by the well-known German Islam scholar Larissa Bender, "Syrien – Der schwierige Weg in die Freiheit" ("Syria: The Difficult Road to Freedom"), in which prominent activists and intellectuals deal with almost all the issues concerning the protest movement.

Instead, political reporting has become polarised, concentrating on the unpopular participants, like Assad's militias and the military on the one side, and the Muslim Brothers and jihadists on the other, so that there seems to be nothing left of Syria that isn't bad.

That's why the term "civil war," even now, still invokes an almost allergic reaction from Syrian activists, artists and intellectuals from a wide variety of ethnic groups and religious (or non-religious) backgrounds. As soon as the term comes up in an interview, it's clear how the interview is going to start.

"Before we start," says poet and journalist Thaer Ezzazoa in a Skype interview from Cairo, "I'd like to make it clear that this is not in the first place a civil war. It started with singing and dancing. That's our starting point." 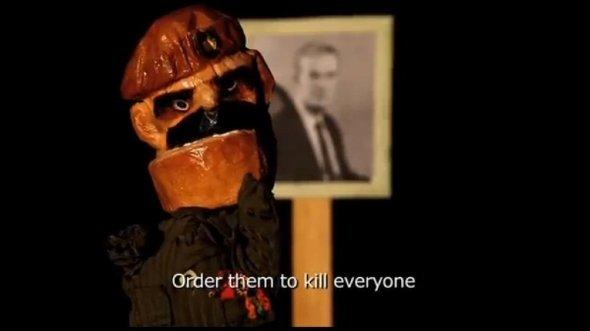 Creative resistance: One of the artistic forms of expression that have developed on the Internet and within Syria's social networks is the political satire of the puppet theatre group "Masasit Mati", which fulminates against the Assad regime with sketches from the "Diary of a Little Dictator"

​​The young artist Ahmed Ramadan starts his interview in a Berlin café in the same way, but he points out carefully that he wants also to make clear that we come from different cultures. That could be another reason, aside from the language problems, why we perhaps won't understand everything we say – "But let's try." There is probably plenty of experience behind such careful formulations.

No attention for the peaceful activities

There's no reason to question why the political reporting is as it is: even sensitive observers had good reason to start to use civil war vocabulary as early as the end of 2011. Mistrust is growing between the various elements in the opposition, and even at peaceful demonstrations you can hear people shouting slogans like "We are all jihadists – death to the Alawites."

Many private conversations have made it clear that the allergy against the civil war which is felt by educated members of the opposition who support the people's movement doesn't have anything to do with a failure to recognise the seriousness of the danger of religious conflict or instrumentalisation of the struggle by Islamists.

It's rather the other way round: people don't take pay any attention to the peaceful activities; they don't report on them, analyse them or support them. Even strong emblematic actions, which one would think were just made for the media, are scarcely noticed.

For example, four Syrian "peace brides" walked across the bazaar in Damascus in November 2012 in white wedding clothes and called for an end to the military actions. They were immediately taken away by the security agencies. There were no reports, and a campaign by Amnesty International was taken up by 55 people who filled out the ready-made electronic forms.

Only when the "brides" were released on 9th January as part of a prisoner exchange did their pictures appear in an agency report on the situation in general. No-one knows how they are now.

In German media, the unique YouTube puppet theatre Masasit Mati has been reported on only by Qantara.de and one German newspaper. According to unofficial information, the young members of the theatre group have now fled into exile abroad. Were the Italian anti-mafia campaigner Roberto Saviano to flee to Australia, even the local papers would be reporting on it. 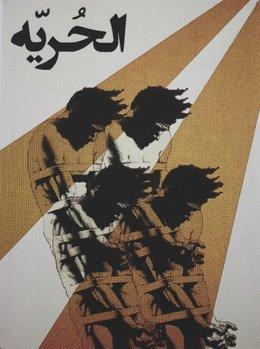 Focus on non-violent cultural protest against the Syrian regime: the piece "Freedom" from the "Kunststoff Syrien" exhibition

​​The same thing applies to the various new media which have grown up since the start of the protests: Syria Tomorrow, Enab Baladi, Souriatana, Tlena Ala Elhouriah and others. They certainly would be interested to receive some attention – and even support.

If one asks the exiled journalist and women's rights activist Rula Asad in the Netherlands what she's doing, she lists a wide range of activities with a number of Arabic media outlets which mean little to a non-Arabic speaker. There are few resources available to support artists and intellectuals who have had to flee their home. There are a few places sponsored by the Heinrich Böll House and the German PEN, but they are already taken up by Rosa Yassin Hassan, Amer Mattar and Hiba Al-Ansari. According to the head of the Böll House, Sigrun Reckhaus, they have further inquiries almost daily.

It's even harder to find support for the much larger number of Syrian artists and intellectuals who have fled to Lebanon or Egypt.

This is very different from the situation during the Egyptian revolution two years ago, when think tanks funded by the West seemed for a time to be sprouting all over the place. At the same time, it may seem natural that the promotion of cultural activities seems of secondary importance when the basic needs of the refugees in Syria's neighbouring countries have yet to be met. The UN's refugee agency UNHCR lacks 80 percent of the funds it needs.

But it is not just the job of the media to create an awareness of Syrian cultural activity, and thus to support people who may find that their work is their only anchor in a world of death, torture, flight and exile.

In August 2012, the exhibition-makers Sabe Wunsch and Uta Zwickirsch put on a show of Syrian artists in Berlin with a German title – "Kunststoff Syrien" – which punned "Art-stuff Syria" and "Plastic Syria."

The media interest was overwhelming, but there have been no offers so far to take the show, which has been planned as a travelling exhibition, elsewhere.

A civil war can no doubt not be settled merely by the promotion of artistic activity. But if there's anything which can strengthen the civil society in its peaceful activities, an interest in its cultural efforts is certainly not the worst option. The risk that one might burn one's fingers on the various conflicts of interest involved is a rather weak excuse.

A Tunisian farmer attaches a machine to a cow's udder and sets the pump whirring, but he only expects to fetch less than half the normal amount of milk amid soaring fodder prices END_OF_DOCUMENT_TOKEN_TO_BE_REPLACED

Food prices doubled, salaries halved, banks restricting withdrawals: Egyptians now have the same problems as the Lebanese. But if things get worse here, the fallout will be far ... END_OF_DOCUMENT_TOKEN_TO_BE_REPLACED

Any reconciliation between Turkey and Syria’s Assad regime would have disastrous consequences for many Syrians, explains Syria expert Kristin Helberg END_OF_DOCUMENT_TOKEN_TO_BE_REPLACED

Iraq bears the scars of decades of conflict and has seen its antiquities plundered, yet the House of Manuscripts' collection has managed to survive END_OF_DOCUMENT_TOKEN_TO_BE_REPLACED

Chinese President Xi Jinping's visit to Saudi Arabia in December 2022 may have rattled Washington, but it simply highlighted the Arabs’ desire to diversify their foreign relations ... END_OF_DOCUMENT_TOKEN_TO_BE_REPLACED

There are signs of an imminent normalisation of relations between Turkey and Syria. This would allow Erdogan to score political points domestically before the upcoming elections ... END_OF_DOCUMENT_TOKEN_TO_BE_REPLACED
Author:
Astrid Kaminski
Date:
Mail:
Send via mail

END_OF_DOCUMENT_TOKEN_TO_BE_REPLACED
Social media
and networks
Subscribe to our
newsletter