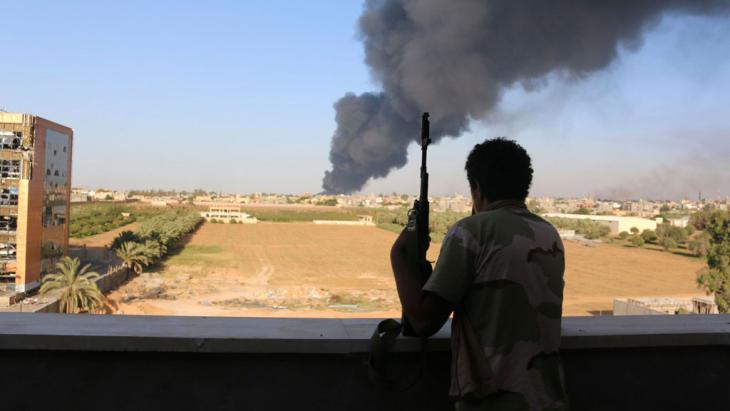 The political divide in Libya continues to grow. Amal El-Obeidi, professor of Comparative Politics at the University of Benghazi, cites two historical causes for the current situation: the absence of a Libyan identity and the tribal structure of society in the North African country. By Laura Overmeyer

"Libya continues to experience armed conflicts and other violence across the country, and violations and abuses of international human rights and humanitarian law persist, causing hundreds of deaths, mass displacement and a humanitarian crisis in many areas," according to a report from the Office of the UN High Commissioner for Human Rights published at the end of December.

For months now, the news coming out of the North African state has been horrific. It is nearly three years since Libya confidently shook off the shackles of more than 40 years of Gaddafi dictatorship, and now it is at risk of sinking into a self-destructive civil war.

Islamists are fighting secularists; those loyal to the old regime are fighting young revolutionaries; rival towns and enemy tribes are taking up arms to resolve their disputes – and as if this were not enough, the group calling itself Islamic State now seems to be getting involved. Everyone seems to be fighting everyone else, or so it seems at first glance. 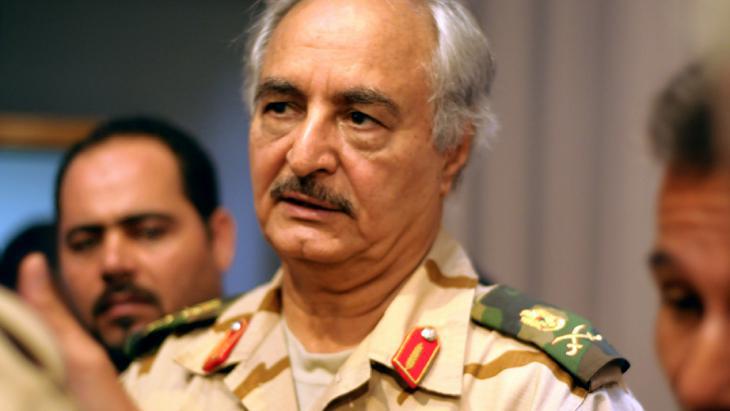 In May 2014, renegade army general Khalifa Haftar (pictured here) and the "Karama" (dignity) militia launched a military offensive against Islamist militia in the country. Since then, he has been building up an army and is putting up resistance, above all to the Islamists in Benghazi. Haftar supports the parliament in Tobruk. Libya's official armed forces are largely powerless

A struggle between two centres of power

In his report for "Foreign Affairs", Wolfram Lacher, an expert on Libya at the German Institute for International and Security Affairs (SWP) in Berlin, tries to bring some clarity to the chaos. "At the centre of the conflict is the struggle between two centres of power, composed of networks of towns, tribes and militias. Both sides are competing for political authority and legitimacy in a country where functioning institutions de facto do not exist. Over the past months, various rival factions have merged with one or the other of these two sides."

Each of the two centres of power has put up a government and is co-operating with an alliance of militias. The North-eastern city of Tobruk is the seat of Prime Minister Abdullah al-Thinni's internationally recognised government, legitimised by its roots in the parliament elected in June 2014. It is linked to the "Karama" (dignity) militia, led by former Gaddafi general Khalifa Haftar, whose goal is to take the Libyan capital, Tripoli.

Since August, the capital has been occupied by rebel forces, who have established a parallel government there under Omar al-Hassi. They are allied to the "Fajr" (dawn) group of militias, who are said to have a radical Islamist outlook. However, they are not on the same level as "Ansar al-Sharia", an IS-like organisation operating independently in Benghazi.

"Viewed from outside, neither of the two sides has more legitimacy as a 'state institution' than the other," says Lacher. "Al-Thinni's government may have been an elected legislative to start with, but it has now been undermined and is hardly representative – quite apart from the fact that the parliamentary elections in June were problematic in themselves. Both sides have also taken violent action against civilians, and have shown themselves to be entirely uncompromising with respect to any potential dialogue."

According to Lacher, it has been counter-productive for the international community to recognise the government in Tobruk as a legitimate authority. He believes the conflict can only be resolved by installing a government recognised by all sides, and partisanship by foreign countries makes this resolution impossible. "It is important to acknowledge that the Tobruk government is part of the vicious circle."

Tribal areas in Libya: according to Laura Overmeyer, Amal El-Obeidi views Libya's fixed territorial tribal structures not only as a hindrance, but as an opportunity for a future Libyan state built on a decentralised concept

But how did this vicious circle come into being? Didn't Libyans unite against Gaddafi, and weren't they optimistic in their vision of a new Libyan state? Why was it impossible for them to hold on to this unity? And where does the discord come from that has led to people being attacked or kidnapped at will by their countrymen because of their religious or tribal affiliation?

Amal El-Obeidi, professor of Comparative Politics at the University of Benghazi, cites two historical causes in particular for the current situation: the absence of a unifying Libyan identity and the Libyans' tribally-oriented political culture.

"Historically, Libya was never seen as a single unit, but as three regions: Tripolitania, Fazzan and Cyrenaica. This division is also mirrored in the current situation, as each of these regions developed its own structures and cultures", El-Obeidi explained in December, during her lecture at the offices of the Deutsch-Arabische Freundschaftsgesellschaft (DAFG –The German-Arab Friendship Society). "In addition to this, before independence in 1951, Libya was always part of another empire. You could say that, historically speaking, Libyan society is a stateless society."

In view of this fact, Libyans are looking to the only existing institution with which they have always been familiar, to answer all legal, social and cultural questions: the tribe.

"Family, clan and tribe are the traditional units of Libyan society," says El-Obeidi. "Even today, they determine people's lives and behaviour. Libyans lack basic trust in central political institutions; participation and democracy are not rooted in their political culture, so they can't spring up overnight."

However, El-Obeidi doesn't just see these fixed territorial tribal structures as a hindrance, but as an opportunity for a future Libyan state built on a decentralised concept.

"Libyans have never been Libyans" 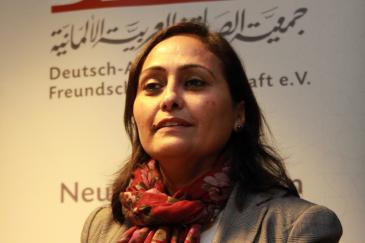 "What we need for Libya is a personality like Nelson Mandela," says Amal El-Obeidi, Professor of Comparative Politics at the University of Benghazi

Another consequence of this historical/geographic division was the lack of a national identity, or, as a previous Prime Minister of Libya, Abd al-Hamid al-Bakoush, once put it: "Libyans have never been Libyans".

A study carried out by El-Obeidi at the University of Benghazi in the 1990s on the theme of "Identity" (the publication of which was prevented by the Gaddafi regime) revealed that Libyan identity had hardly any significance. The students regarded themselves first as Muslims, then as members of a tribe or a family, as Arabs (not least due to the Arab nationalism propagated first by Nasser, and then by Gaddafi) or as Maghrebis – but not as Libyans.

"If we want to build a state, we have to succeed in creating a unifying identity and emphasising our similarities," says El-Obeidi. "Only in this way can we become a stable, secure state in the long term. This unity can only come from within; it cannot be forced on us through outside interventions."

She identifies language and religion as unifying elements. The religion she is talking about here is the "original" religion of the Libyan people, Sunni-Maliki Islam, not the Islamism now on the rise there. She also believes that in the long term, the valuable resources of oil and water have the potential to unify the people – even if they are currently fuelling discord and have become the disputed goal of all sides.

Nevertheless, El-Obeidi hopes that the Libyans will one day manage to create a unifying Libyan identity. "Personally, I am proud to be Libyan," she said during her lecture – adding with a smile, "What we need for Libya is a personality like Nelson Mandela."

Home
Print
Newsletter
More on this topic
Interview with Andreas Dittmann: "Libyans themselves are destroying their country"Journalists in Libya: Caught in the crossfireClashes between rival militias in Libya: The battle for TripoliWomen in Libya: High hopes brutally dashed
Related Topics
Arab Spring, Arabellion, Democracy and civil society, Libya after Gaddafi, Pan-Arabism | Arab Nationalism
All Topics

Cries of "Benghazi!" still resonate across the USA ten years after a deadly terrorist attack in Libya killed the U.S. ambassador and three other Americans. Ethan Chorin re-tells ... END_OF_DOCUMENT_TOKEN_TO_BE_REPLACED

After a two-year hiatus, the Arab League re-convened at the beginning of November in Algiers against a backdrop of uncertainty and discord. By Pierre Boussel END_OF_DOCUMENT_TOKEN_TO_BE_REPLACED

In the run-up to the COP27 global climate summit, hosted by Egypt in November, it is worth noting that little rainfall, aggressive heatwaves and worsening drought make the Middle ... END_OF_DOCUMENT_TOKEN_TO_BE_REPLACED

The southern shores of the Mediterranean Sea are losing sand faster than almost anywhere else. The ecological and economic damage is immense. The good news is, there are ways to ... END_OF_DOCUMENT_TOKEN_TO_BE_REPLACED

A ceasefire has been in effect in Libya for the past year and a half. Yet after Russia's attack on Ukraine, another proxy war looms in Africa's most oil-rich country. Mirco ... END_OF_DOCUMENT_TOKEN_TO_BE_REPLACED
Author:
Laura Overmeyer
Date:
Mail:
Send via mail

END_OF_DOCUMENT_TOKEN_TO_BE_REPLACED
Social media
and networks
Subscribe to our
newsletter