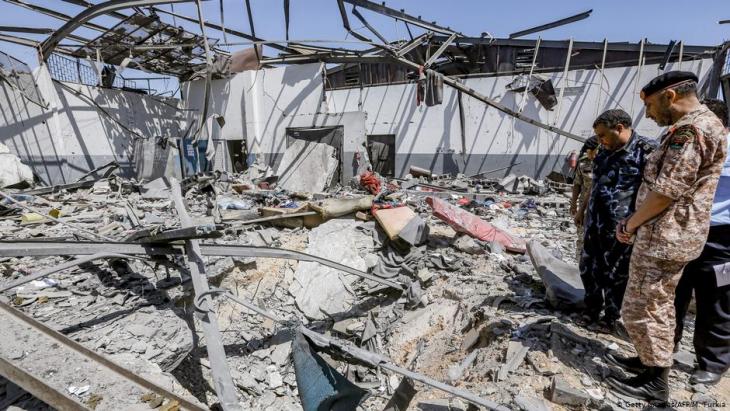 U.S. undermining "any hope for a successful political process"

The warring factions in Libya's stalemated conflict don't seem to be interested in a diplomatic solution. The United States could use its clout to trigger discussions, but it appears to be doing the opposite. By Carla Bleiker

A civil war is raging in Libya. Since April, the capital, Tripoli, has been under siege by militias led by General Khalifa Haftar. To date, this offensive marks the high point of tensions between the two groups vying for leadership: Haftar and his militias in the east of the country, and the UN-backed Government of National Accord (GNA) led by Prime Minister Fayez al-Sarraj in northwestern Libya.

In early July, the Tajoura refugee camp, located east of Tripoli, got caught up between the front lines (see picture above). According to the UN, 53 people were killed in two air raids targeting the camp and some 130 were injured. The UN indicated the attacks could amount to war crimes — an accident could be ruled out since both warring parties had received the camp's geographic co-ordinates in order to avoid exactly that kind of attack. The GNA, internationally recognised as Libya's leadership, blamed Haftar and his Libyan National Army (LNA). Haftar, however, has rejected any responsibility.

The UN Security Council condemned the airstrikes in the strongest terms and intended to emphasise the point with an official statement. That was when the US delegation put its foot down, without providing a specific reason. Such a condemnation from the UN could have been seen as a criticism of Haftar's approach — and President Donald Trump publicly pledged support for Haftar in April.

In a phone call between Trump and Haftar on 15 April, the U.S. president "recognised Field Marshal Haftar's significant role in fighting terrorism and securing Libya's oil resources," according to a White House statement published several days later. "The two discussed a shared vision for Libya's transition to a stable, democratic political system."

When he's dealing with the outside world, Haftar presents himself as a campaigner for a free Libya where extremists have no place. He's the strongman who drives terrorist organisations like "Islamic State" out of the country, the general claims. That is, of course, to Trump's liking.

But publicising the conversation with Haftar was an unusual step, as the U.S. still officially recognises the administration led by al-Sarraj as Libya's legitimate government. Just a few days before the phone call, U.S. Secretary of State Mike Pompeo had criticised Haftar's Tripoli offensive in the strongest terms. "We have made clear that we oppose the military offensive by Khalifa Haftar's forces and urge the immediate halt to these military operations against the Libyan capital," Pompeo said on 8 April. 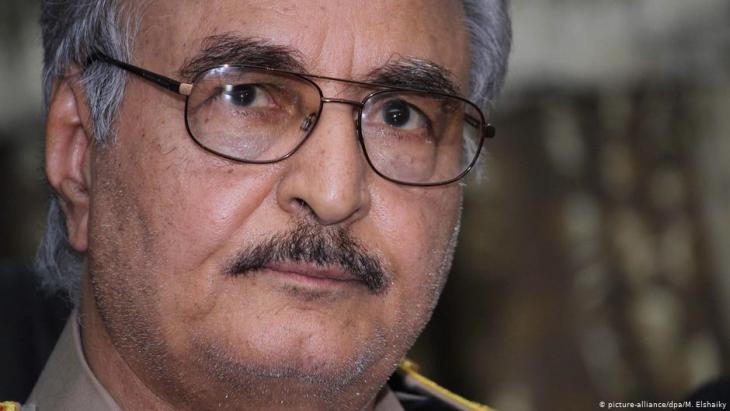 According to Frederic Wehrey, a senior fellow at the Carnegie Endowment for International Peace think tank, General Khalifa Haftar (pictured here) has long said that he wants to rule the country: "He has very little regard for democracy and pluralistic politics. He believes Libya should be ruled with a strong hand, and preferably under him"

Trump's friendly phone call has signalled the opposite, namely that Haftar has "been given a green light by the United States to continue. And that's disastrous," says Jeffrey Feltman. The U.S. diplomat was UN undersecretary for political affairs from 2012 to 2018 and U.S. assistant secretary of state for near eastern affairs from 2009 to 2012.

"You've seen the U.S. try to have it both ways: To not look as though they're backing a brutal military assault on Tripoli, while also not backing away from Haftar," he said. "Appearing to back Haftar's move on Tripoli is a mistake that undermines any hope for a successful political process."

Haftar has "little regard for democracy"

The U.S. is not the only Security Council member to support Haftar. Officially, Russia and France have recognised the Government of National Accord, but according to experts, they simultaneously back Haftar. In addition, several countries in the region are ignoring an arms embargo which the UN body adopted in 2011. Egypt and the United Arab Emirates supply arms to Haftar and financially support the LNA. Both countries are partners with the US, but the Trump administration has not used his influence to clamp down on those arms supplies.

Washington's behaviour had "given a green light to Haftar's regional supporters who are violating the UN arms embargo," says Frederic Wehrey, a senior fellow at the Carnegie Endowment for International Peace think tank. "So it's been, I think, tremendously damaging to peace and U.S. interests."

Wehrey, who met Haftar in 2014, believes it's unlikely the general will halt his military campaign without pressure from third parties. "Haftar has long said that he wants to rule the country," Wehrey added. "He has very little regard for democracy and pluralistic politics. He believes Libya should be ruled with a strong hand, and preferably under him." 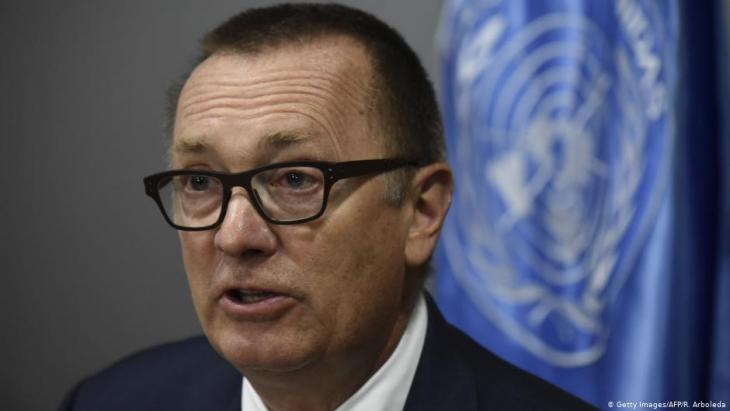 Former US diplomat Jeffrey Feltman (pictured here) has warned that if world powers like the US do not commit to a political peace process and bring the warring factions to the negotiating table, the civil war could have dire consequences for the people in Libya

Outside influence a decisive factor

Currently, neither Haftar and his LNA nor the Government of National Accord give the impression that they are working toward a diplomatic solution. This is why it's crucial that other countries take action, experts have said. "The U.S. should first of all call for a ceasefire. It needs to be very forceful in holding all sides accountable for their actions on the battlefield. Most importantly, the U.S. needs to exert diplomatic leverage toward the regional states that are interfering in Libya, sending in weapons and really pouring gasoline on the fire," said Wehrey.

However, he does not believe Washington will apply pressure on its key associates, Egypt and the UAE. "I don't think that's going to happen because of other US concerns, personal ties between the Trump administration [and the two countries]," he said. In addition, there were important "other regional factors, like the Iran concern."

Feltman warned that if world powers like the U.S. did not commit to a political peace process and bring the warring factions to the negotiating table, the civil war could have dire consequences for the people in Libya, and Tripoli in particular. Both sides had to "finally roll up their sleeves and work out their differences politically," he said. Otherwise "it could very easily become like Aleppo. And why would anyone want that?"

Home
Print
Newsletter
More on this topic
European-Libyan relations: Whom to trust when it comes to Tripoli?Russian involvement in Libya: Backing Haftar to the hilt?Civil War in Libya: What is Russia really up to?Refugee camps in Libya: Guilty of torture and rape by association – Europeʹs dirty secret
Related Topics
Donald Trump, Islam and the West, Khalifa Haftar, Libya after Gaddafi, Libyan Civil War, U.S. policy in the Middle East
All Topics

Morocco and the European Union are at cross purposes when it comes to the Western Sahara. And, as Germany does not support Moroccan claims to the territory, a major conflict has ... END_OF_DOCUMENT_TOKEN_TO_BE_REPLACED

Turkey's parliamentary and presidential elections are scheduled for June 2023. But they are already casting a shadow. While the opposition is calling for early elections, ... END_OF_DOCUMENT_TOKEN_TO_BE_REPLACED

Recep Tayyip Erdogan, disappointed by the European Union’s reluctance to integrate Turkey into its ranks, has re-directed his country’s diplomacy toward the Maghreb and Africa to ... END_OF_DOCUMENT_TOKEN_TO_BE_REPLACED

Although a unity government was formed in Libya in March 2021, tensions and possible crises between the political actors are already emerging. What problems does the country face ... END_OF_DOCUMENT_TOKEN_TO_BE_REPLACED

German Middle East analyst Guido Steinberg and television journalist Ulrich Tilgner have both published new books on the conflicts in the Middle East. Their analyses and their ... END_OF_DOCUMENT_TOKEN_TO_BE_REPLACED
Author:
Carla Bleiker
Date:
Mail:
Send via mail

END_OF_DOCUMENT_TOKEN_TO_BE_REPLACED
Social media
and networks
Subscribe to our
newsletter