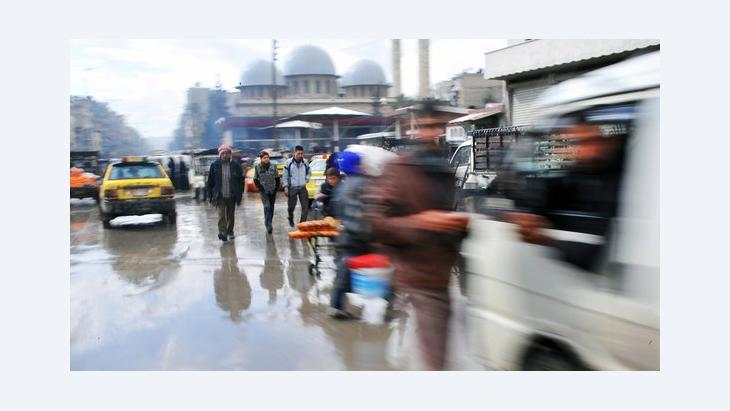 A Return to Normality

Aleppo, the once hotly contested north Syrian metropolis and economic centre, is now a divided city. In the part controlled by the rebels, daily life seems to be gradually returning to normal. More and more refugees from Aleppo are returning to their city, even though economic recovery is slow. Peter Steinbach reports from Aleppo

﻿Those arriving in Aleppo are surprised by what they find: police officers are regulating traffic; shops are open; cigarettes, petrol and fruit juice are being sold on the street; many inhabitants of Syria's biggest city are sitting outdoors in sidewalk cafés, smoking hookahs or drinking tea.

In the section of Aleppo controlled by the rebels, normality seems to have been restored. Hardly anything here calls to mind the disaster reports served up daily by the media. Indeed, the situation in Aleppo can no longer be compared with that in 2012.

In July of last year, the Free Syrian Army (FSA) took over half the industrial metropolis. Government forces circled over the city constantly in fighter jets and helicopters, dropping bombs and firing at both civilian and military targets. Today, attacks are mostly confined to the front, which, as the FSA gains ground, is slowly but steadily being pushed into the territory held by the regime forces under President Bashar al-Assad.

Compared to last autumn, bombs now fall relatively rarely on civilian residential areas remote from the battle lines. This is one reason why so many refugees have returned to Aleppo.

"There is almost no electricity and no water, but we wanted to be back in our house. The awful air strikes have declined and the situation is reasonably safe," remarks a father of four who has been back in Aleppo since March. "We prefer our own four walls to the refugee camp. We couldn't stand it there anymore." 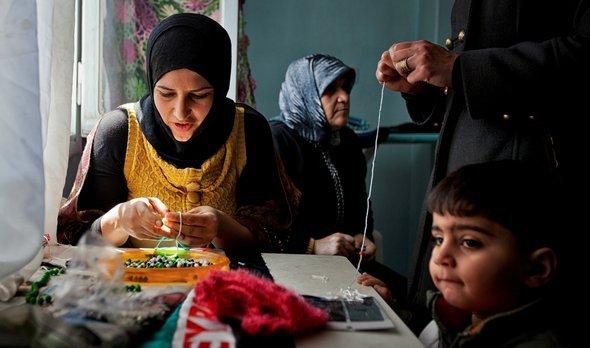 Tentative economic revival: according to Peter Steinbach, things are returning to normal in the part of Aleppo controlled by the rebels: shops are open, people are out and about, and government fighter jets are no longer bombing civilian areas as frequently as they used to

The head of the family, who wishes to remain anonymous, has bought a generator. The water that runs from the tap for a few hours every evening is collected in bottles and tubs. "The situation is tolerable. You can get used to anything and, anyway, we don't have a choice."

The long queues at bakeries once shown on television are nowhere to be found. Plenty of fruit and vegetables are on offer at the markets. Snack bars are selling chicken or kebabs. "The prices are two or three times what they were before the civil war," says Jussef, a former fighter who now confines himself to activities in the media sector. "But at least there is enough to eat again." He got married a few months ago, he notes proudly.

"War or no war, I met her on Facebook and liked her immediately," the 26-year-old says with a smile. The only problem was how to meet up with the girl of his dreams, because she lived in the part of Aleppo controlled by the government. "I just hopped on a minibus and went over there," Jussef says simply. "I had to see her." With their parents' consent, they got married in the rebel territory of Aleppo.

The two parts of the city are not hermetically sealed off from each other. Every day, minibuses and taxis cross the battle lines in both directions. Some residents work on the government side, where people can go to the bank or buy phone cards.

Nevertheless, passing the Syrian army checkpoints is a huge risk. Not everyone is as lucky as Jussef was in his border-crossing. In January, over 60 corpses washed ashore on rebel territory. According to statements made by some of the families of the deceased, their relatives had only made a brief trip to the other part of the city. They never came back. The Queiq River has now been renamed the River of Death.

Saif el-Dawla is home to the new court of Aleppo, founded by around 50 judges and lawyers in September of last year. There are chambers for civil, criminal and military law. Any citizen can file charges, which are then reviewed by a public prosecutor before being passed on to the examining magistrate. Following a judicial investigation, three judges pass judgement.

Cases are heard over coffee and tea in one of the small rooms of the apartment house that has been converted for use as a courthouse. "The draft law to create a civil society proposed by the Arab League serves as basis for jurisdiction", explains examining magistrate Abdullah Karam. "The Sharia, Islamic law, is applied only in family law cases. In this respect, we are no different from any other Arab state." 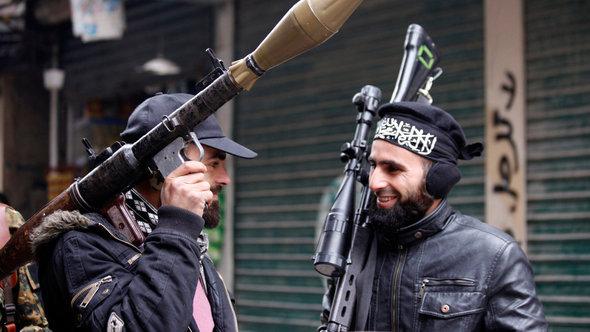 The overwhelming dominance of the radical Islamists: Jabhat al-Nusra is one of the most successful rebel brigades in Syria in military terms. Many Syrians fear that if Assad is toppled, the group will declare Sharia the sole basis of Syrian law

Also applied are common sense and the law texts of the old Syrian state, not all of which were bad, he adds. "Of course, the Islamists don't like that," remarks a lawyer who is paying a visit to the examining magistrate and wishes to remain unnamed. He is referring to the radical Islamist groups Ahrar al-Sham and Jabhat al-Nusra, which the USA has put on its list of terrorist organisations. "They have set up their own court of law and regularly make trouble for us."

Three months ago, a Sharia Council was set up. Members of the council are Islamists from Fajr Islam, Ahrar al-Sham, Jabhat al-Nusra, the Muslim Brotherhood and Liwa Tawhid, the largest rebel group in Aleppo. Liwa Tawhid is a moderate Islamist group that is part of the FSA, which radical Salafi organisations don't want to join.

"There is only one God and one law," exclaims Abdulkader Saleh. He sits on the Sharia Council and is a supporter of Jabhat al-Nusra. What can be bad about encouraging people not to smoke or drink and to live a healthy life that is pleasing in the eyes of God? He is convinced that all the Al-Nusra front wants to do is empower everyone and make them stronger.

In future, there should be only one court, he says. "Negotiations are under way," assures Saleh, "but it is not easy. How can the courts be merged? There is only Allah, and his divine law." Saleh is convinced that Islamic law will soon prevail throughout Syria.

"Syria will become an Islamic state, there is no doubt about it." All members of the Sharia Council are in favour of it, he says; "even Liwa Tawhid," assures Saleh, who goes on to say that Jabhat al-Nusra is the driving force and has the upper hand. Only divine law? No elections and no parliament after the fall of the Assad regime? "Only Allah knows for sure," says Saleh, before laughing mischievously and taking his leave with a "Assalamu Alaykum".

Tempest in a teacup?

"For me, the success of Jabhat al-Nusra and other Islamist groups is nothing but a tempest in a teacup," Dr Al-Hajj Osman says. The doctor was arrested by Jabhat al-Nusra after taking down their flag in his hospital. "The man who had hung it up there claimed that I had trampled underfoot their emblem bearing the Muslim profession of faith." Al-Nusra saw this as a denigration of Islam. 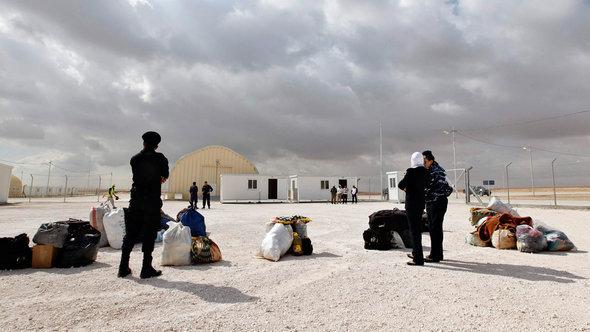 "We prefer our own four walls to the refugee camp. We couldn't stand it there anymore," says a father who left the refugee camp and returned to his hometown of Aleppo with his family

"Of course I had done no such thing", explains Dr Osman, "and I was released the very next day." In Aleppo, Jabhat al-Nusra organises the supply of flour to bakeries, repairs power lines, provides traffic police, takes care of waste disposal and has reopened numerous industrial enterprises in order to give the people of the city work and bread.

"They are trying to organise civilian life," says Dr Osman. "People welcome this, but ultimately accept it only because the group currently has the upper hand."

He believes, however, that once Assad is toppled, the ascendancy of the radicals will come to an abrupt end. "The people of Syria will not stand for a new dictatorship," Dr Osman says with conviction, straightening his glasses. "We have a different mentality."

﻿Baathist propaganda under lock and key

Although Nour Hak also has ideological problems with the radical Islamists, she doesn't want to talk about it. The 35-year-old mother of three was a teacher at the university before the start of the civil war and is now a headmistress, working 16 hours a day. "War or no war, education is important, and children cannot sit at home for two years. They have to go to school."

Five months ago, Nour Hak began teaching with only four pupils. Today, there are already 700 children in three schools. Nothing remains of the old education system of the Assad regime and its Baath Party. All textbooks containing government propaganda have been put away, thousands of them languishing in a storeroom behind closed bars.

Nour Hak's schools are financially supported by the Liwa Tawhid brigade. "In our schools, girls and boys are educated together up until the age of 14," she explains. "Our teachers are not veiled." Things are quite different in the new schools founded by radical Islamist groups. "There are male teachers there for boys, and women to teach girls, and the teachers are veiled from head to toe."

It is very clear that she does not approve of this principle, but she doesn't want to say anything more about it. The cards are stacked against anyone who risks alienating the extremists in today's Aleppo.

The photos of the first Friday prayers in Hagia Sofia in 86 years triggered passionate and diverse responses around the world. Surrounded by a coterie of ministers, Turkey's ... END_OF_DOCUMENT_TOKEN_TO_BE_REPLACED

Morocco officially declared itself a country of immigration in 2013, responding to the growing number of immigrants arriving from sub-Saharan Africa. Since then, tens of thousands ... END_OF_DOCUMENT_TOKEN_TO_BE_REPLACED

As a consequence of the coronavirus pandemic, the Osnabruck Morgenland Festival took place via YouTube for the first time – transporting us to new cultural regions through music. ... END_OF_DOCUMENT_TOKEN_TO_BE_REPLACED

Twelve million Syrians are dependent on humanitarian aid, a sombre figure that conceals much suffering and high costs, of which Europe bears 80%. With an aid shortfall looming, ... END_OF_DOCUMENT_TOKEN_TO_BE_REPLACED

In the age of corona, Ankara's regional power strategy is twofold: on the one hand, Turkey is engaged in a charm offensive to revamp its political image, which has suffered lately ... END_OF_DOCUMENT_TOKEN_TO_BE_REPLACED

END_OF_DOCUMENT_TOKEN_TO_BE_REPLACED
Social media
and networks
Subscribe to our
newsletter