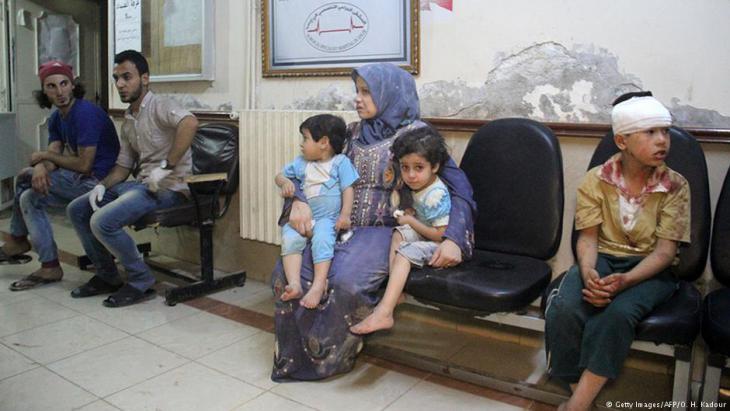 Civil war in Syria
Fighting the jihadists with unusual weapons

Idlib, in north-western Syria, is dominated by jihadists. But resistance there takes on many forms, and civil structures are emerging as an effective weapon in the battle against terror. By Kristin Helberg

They started out as a health authority on wheels. In 2013,  Dr Munzer Khalil and two colleagues began driving around the province of Idlib in an ambulance. An office would have been too dangerous, says Khalil, head of the health authority, at a conference of the Union of Medical Care and Relief Organisations (UOSSM) in Berlin. After all, he adds, the regime of President Assad carries out targeted bombing raids on medical facilities in order to destroy health provision in opposition areas. The situation hasn't changed.

According to UNICEF, many of the 107 hospitals and clinics attacked during the first half of 2017 are located in the North-West of the country. In addition, the Hama Central Hospital, which specialised in surgical emergencies, had to close following a rocket attack on 26 September and the Al-Tah maternity clinic near Maarat al-Numan lost its neonatal care unit to bombs on 19 September.

Despite all this, the Idlib health authority has grown into a successful department. Since the withdrawal of Assad's troops from the entire province in 2015, Dr Khalil and his team have been looking after three million residents, among them 800,000 internal refugees who were displaced from other regions by the regime. With 48 hospitals, 533 doctors and 1,275 nurses, the health authority is the largest civilian organisation in north-western Syria.

The authority has only been able to flourish in this manner due to the support of the UOSSM. The NGO, which was founded by Syrian doctors abroad in 2012, maintains good contacts both within Syria and abroad, and is viewed as effective and credible. This means the medics are particularly favoured by foreign donors who want to give humanitarian help to Syria without bolstering the regime or indirectly financing radical fighters. The German government is also supporting the UOSSM to the tune of €8 million.

But there is a danger that the money for Idlib could dry up: large areas of the largest of the four deescalation zones set down by Russia, Iran and Turkey, are controlled by the extremist Hayat Tahrir al-Sham (HTS) alliance, founded in January 2017 by various Islamist militias in northern Syria.

The strongest faction is the former Nusra Front. For this reason, the area is increasingly viewed from a western perspective as a "terror province", and no longer as an opposition-held territory worthy of support. The people in the North-West fear that like the inhabitants of former IS-held regions, they will end their lives in the hail of bombs dropped by the international community. Nevertheless, Idlib currently shows that consolidating civil structures is an effective weapon in the battle against terror. 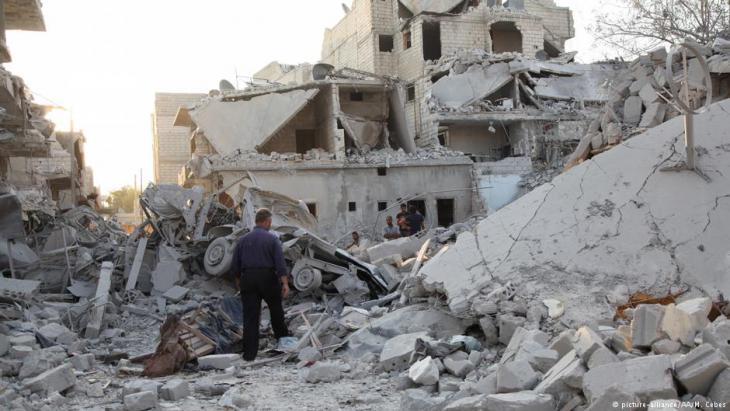 Targeted by Assad' troops: in recent months, the Syrian Army has increasingly got the upper hand over Islamist militias in Syria. Recently, fighting has focused on the north-western province of Idlib, the biggest and most densely populated area outside the control of the regime. Pictured here: the aftermath of a bomb attack in Idlib

It is indeed the case that the province is dominated by HTS primarily from a military perspective. Other rebel groups, such as the previously powerful Ahrar al-Sham, have either joined the alliance or been significantly weakened. But even the jihadists are aware that a region cannot be governed with weapons alone. What they need is the support of the people. The people of Idlib have always been impoverished and conservative, and after six years of war, three quarters of the population rely on humanitarian aid. So their support will be gained by those who distribute food and medicine, supply electricity and water, look after the people and keep them safe.

Just like Islamic State (IS), HTS is therefore focussing on building up structures. It set up the "civil administration for public services" to monitor and replace existing local councils or civil-society organisations.

But the HTS approach is less brutal that that of IS: instead of taking over institutions by force and publicly executing political opponents, HTS uses intimidation and infiltration. But a study by the Syrian sociologist Haid Haid for the initiative Adopt a Revolution, shows that this doesn't always work.

Haid, who is a researcher at King's College in London, examined the ways in which civil society in northern Syria is fighting extremism. He found out that places with well-functioning local government, reliable public services and close links between civil society and administration are most effective at warding off the influence of the jihadists.

The Kurds are under attack from two sides: from Turkey, and from Iran. The situation in their territories in northern Iraq is becoming increasingly desperate. Birgit Svensson ... END_OF_DOCUMENT_TOKEN_TO_BE_REPLACED

More than 300 children in rebel-held northwest Syria kicked off their own football World Cup on Saturday, with organisers hoping to shine a light on communities battered by 11 ... END_OF_DOCUMENT_TOKEN_TO_BE_REPLACED

Lamya Kaddor, MP for Germany’s Green Party, visited Qatar with a group of parliamentarians. In interview with Claudia Mende, she advocates a differentiated picture and urges that ... END_OF_DOCUMENT_TOKEN_TO_BE_REPLACED

Arabs in the German capital? For many, this means criminal clans. Yet the city is home to a vibrant intellectual scene. Exiles from Syria, Palestine and Egypt are gathering to ... END_OF_DOCUMENT_TOKEN_TO_BE_REPLACED

After a two-year hiatus, the Arab League re-convened at the beginning of November in Algiers against a backdrop of uncertainty and discord. By Pierre Boussel END_OF_DOCUMENT_TOKEN_TO_BE_REPLACED

In the run-up to the COP27 global climate summit, hosted by Egypt in November, it is worth noting that little rainfall, aggressive heatwaves and worsening drought make the Middle ... END_OF_DOCUMENT_TOKEN_TO_BE_REPLACED
Author:
Kristin Helberg
Date:
Mail:
Send via mail

END_OF_DOCUMENT_TOKEN_TO_BE_REPLACED
Social media
and networks
Subscribe to our
newsletter