"No place for al-Qaida in Syria"

In Maarat al-Numan in 2016, for example, residents protested for more than 100 days against an HTS-precursor militia; in February 2017, they took to the streets chanting "No place for al-Qaida in Syria". There are regular protests in other places too, above all when the jihadists attack institutions.

In Atareb, HTS wanted to gain control of the police headquarters, the courts and the administration. The alliance also offered to take over the insolvent local bakery. Broad social resistance, which involved local rebel commanders, dignitaries and elders, succeeded in heading off the takeover. Activists drummed up donations to save the bakery.

Sometimes, civil resistance also demands compromise. In Kafranbel, famous since the beginning of the revolution for its political caricatures, the Nusra-Front stormed the radio broadcaster Fresh FM in January 2016. It confiscated equipment and temporarily detained the manager of the station. The reason it gave for this course of action was that the broadcasting of music is "haram" (forbidden). Radio Fresh FM went on broadcasting. Now, however, activists broadcast animal noises instead of music in between the commentaries. 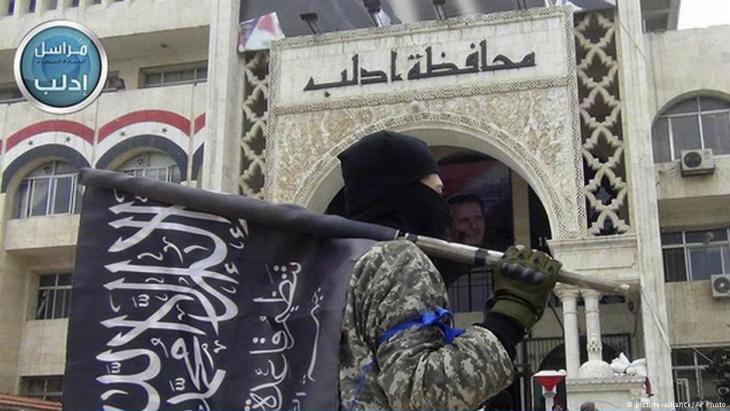 The strongest Islamist faction in the province of Idlib is the former Nusra Front. "For this reason," writes Kristin Helberg, "the area is increasingly viewed from a western perspective as a 'terror province', and no longer as an opposition-held territory worthy of support." This is a disaster for the residents and the civil society groups hitherto receiving financial support from abroad. Pictured here: a fighter of the Nusra Front outside the central administrative building in the province of Idlib

"We've learned from the mistakes of the past," says Mustafa, a freelance trainer working in the peace sector, in Haid's study. Putting up resistance to Assad and IS has been a kind of "training on the job" and has prepared them for the confrontation with HTS.

Demonstrations are organised via closed groups in social networks or messaging services such as WhatsApp. Ideally, the initiators cannot be clearly identified and are therefore protected from persecution. Although most of the protests are still directed against the regime, demonstrations for freedom and human rights in Idlib also show the jihadists that they cannot control the local people.

In actual fact, HTS does allow most of the demonstrations to go ahead in order to avoid a direct confrontation with local residents. Human rights trainer Kareem is quoted as saying that HTS knows that clashes with the population cannot be won by military means. Haid says this makes it all the more important to mobilise people by creating a long-term political awareness, allaying their fears, calling on them to show unity, and recruiting them to civil institutions.

Any reconciliation between Turkey and Syria’s Assad regime would have disastrous consequences for many Syrians, explains Syria expert Kristin Helberg END_OF_DOCUMENT_TOKEN_TO_BE_REPLACED

There are signs of an imminent normalisation of relations between Turkey and Syria. This would allow Erdogan to score political points domestically before the upcoming elections ... END_OF_DOCUMENT_TOKEN_TO_BE_REPLACED

As Syrian camps housing families of Islamic State fighters get more dangerous, there are calls to bring children out, even if the mothers don't want to go. The idea of separating ... END_OF_DOCUMENT_TOKEN_TO_BE_REPLACED

Where are the measures to deal with the looming challenges facing the Arab world? In this commentary, Marwan Muasher warns that the region is in grave danger of falling behind ... END_OF_DOCUMENT_TOKEN_TO_BE_REPLACED

At the end of every year, the team at Qantara.de gives you a run-down of the ten most-read articles on the site over the past 12 months. Here is a quick overview of the stories ... END_OF_DOCUMENT_TOKEN_TO_BE_REPLACED

Social engagement is often motivated by religious factors. A new book explores the background to these community efforts and appraises how effective they are in helping to ... END_OF_DOCUMENT_TOKEN_TO_BE_REPLACED
Author:
Kristin Helberg
Date:
Mail:
Send via mail

END_OF_DOCUMENT_TOKEN_TO_BE_REPLACED
Social media
and networks
Subscribe to our
newsletter