Humour as a powerful weapon

In this endeavour, satire and graffiti are just as important as democratic participation. Activists add their own sarcastic comments to HTS propaganda videos and ridicule the jihadists in caricatures and texts. Humour is a powerful weapon, says activist Fares, who heads up an initiative to strengthen local institutions, adding "dictators and jihadists rule through fear, but people are not afraid of something they are able to poke fun at."

More dangerous than satire on the Internet is the battle for the public sphere. Just like the regime with its Assad portraits and flags, HTS is also trying to reinforce its territorial control with logos and slogans. Symbols emanate power and should not, therefore, be underestimated, explains trainer Mustafa. Activists are attempting to break the visual dominance of the jihadists with critical graffiti, for example, when women in Idlib and Maarat al-Numan spray the name of jihadi leader Al-Jolani on rubbish bins.

HTS regards local councils as its biggest competitors. In order to protect these councils from encroachment by the jihadists, the support of the local population is needed. In Saraqib, civil society organisations helped in the local council election. When HTS occupied the city directly afterwards, residents demonstrated until the jihadists withdrew. HTS did, however, return, and took over the city's electricity supply.

The example shows that there are limits to civil resistance. It cannot vanquish a terrorist group, writes Haid, but it can stem its influence. He calls for increased participation of women, among other things because they can prevent the recruitment of young people by radical groups. 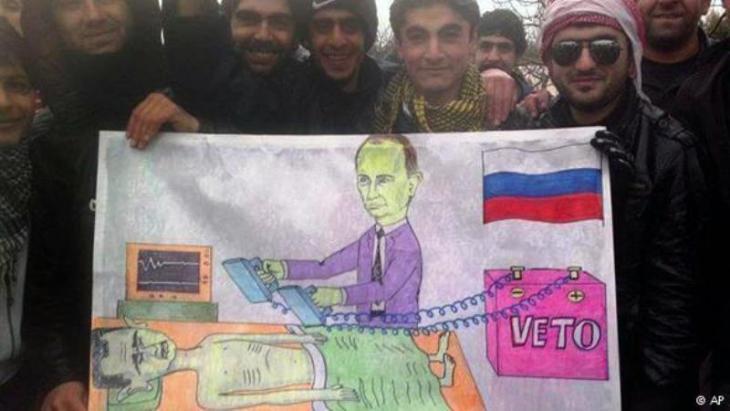 According to Kristin Helberg, activists in Idlib are trying to break the visual dominance of the jihadists's flags and symbols with critical graffiti. For example, women in Idlib and Maarat al-Numan are spraying the name of jihadi leader Al-Jolani on rubbish bins. Pictured here: activists from Kafranbel hold up a caricature of Russian President Putin keeping Assad alive

At the UOSSM conference in Berlin, Raifa Samia explains how this works. In 2015, the 45-year-old set up the women's organisation Barakat Amal (Glimmer of Hope). Together with around 100 volunteers, she looks after refugee women in Idlib who are without partners. "We boost their morale, we offer them vocational training so that they can provide for their children and send them to school," says Samia. Otherwise they would end up in the pay of one of the militias, as a way of feeding their families.

For the activist, who wears a headscarf, co-operation between authorities, NGOs and women's groups is crucial. "Anyone who wants to combat the jihadists must offer the people a better alternative – with education, work and health care."

The colleagues at the Idlib health authority have managed to do just that. "HTS can't control us," says Dr Khalil. The authority is too large, and its work too important for that to happen. At the new Avicenna hospital in Idlib (which has two subterranean levels as a protective measure against the bombs), medical staff are receiving training, a third of them women.

After the first cases of polio in children emerged in 2014, 175,000 children were vaccinated in a process involving 2,000 volunteers. Since then there have been no further cases. And in Sarmada, the first psychiatric clinic has opened in northern Syria, allowing patients with severe trauma to be hospitalised.

Civil structures in Idlib are manifold, and those who work to strenghten them are attacking terrorism not as a symptom, but at its very roots.

Any reconciliation between Turkey and Syria’s Assad regime would have disastrous consequences for many Syrians, explains Syria expert Kristin Helberg END_OF_DOCUMENT_TOKEN_TO_BE_REPLACED

There are signs of an imminent normalisation of relations between Turkey and Syria. This would allow Erdogan to score political points domestically before the upcoming elections ... END_OF_DOCUMENT_TOKEN_TO_BE_REPLACED

As Syrian camps housing families of Islamic State fighters get more dangerous, there are calls to bring children out, even if the mothers don't want to go. The idea of separating ... END_OF_DOCUMENT_TOKEN_TO_BE_REPLACED

Where are the measures to deal with the looming challenges facing the Arab world? In this commentary, Marwan Muasher warns that the region is in grave danger of falling behind ... END_OF_DOCUMENT_TOKEN_TO_BE_REPLACED

At the end of every year, the team at Qantara.de gives you a run-down of the ten most-read articles on the site over the past 12 months. Here is a quick overview of the stories ... END_OF_DOCUMENT_TOKEN_TO_BE_REPLACED

Social engagement is often motivated by religious factors. A new book explores the background to these community efforts and appraises how effective they are in helping to ... END_OF_DOCUMENT_TOKEN_TO_BE_REPLACED
Author:
Kristin Helberg
Date:
Mail:
Send via mail

END_OF_DOCUMENT_TOKEN_TO_BE_REPLACED
Social media
and networks
Subscribe to our
newsletter