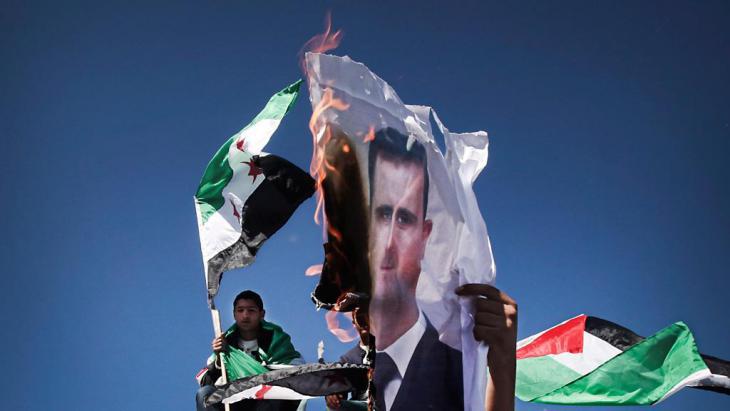 If the self-styled "Islamic State" is to be successfully combatted, the Syrian conflict has to be resolved. And for this, one thing is necessary above all: an alternative to the Assad regime. This alternative can only be created in safe zones, writes Kristin Helberg

It all sounds so hopeful. The UN Security Council is speaking with one voice, foreign ministers are shuttling between Moscow, Tehran, Riyadh, Ankara, the Gulf States and Damascus, and even ideological enemies are talking to each other: Saudi Arabia and emissaries from Assad, members of the opposition National Coalition and Russia, Iranian negotiators and the Islamist rebel group "Ahrar al-Sham".

So, is a political solution to the Syrian conflict nigh? Unfortunately not. We are seeing three things here. Firstly, a contest between Russia and Iran over the question as to who has more influence in Syria and therefore carries more diplomatic weight. Secondly, the Assad regime's desperate, merciless plan to use the time before they are forced into negotiations to secure strategically significant areas in the west of the country. And thirdly, an hysterical fear of IS that dominates everything: the thinking in Washington and Europe, and the strategies and alliances in the region. The last of these is aggravated by a megalomaniac Turkish president, who is prepared to sacrifice an agreement on the Kurdish issue to his fantasies of omnipotence.

As complicated as all this may sound, it can be summed up in two simple sentences. Bashar al-Assad can no longer control Syria. And nobody wants IS there. Even supporters of the regime agree with these statements, which makes them a good starting point to work from. But the time doesn't yet seem ripe for this.

The wrong approaches to a solution

For this reason, the UN special envoy Staffan de Mistura wants to begin by splitting the Syrians into four working groups to discuss the protection of civilians, legal questions, the fight against terrorism and the rebuilding of the country. This sounds constructive, but it may well be a lengthy process – meaning that all those still clinging to a military resolution (Assad and the jihadists) will have gained time, and the international community can relax, telling itself that a diplomatic solution is on the way.

While de Mistura's plan provides for a "transitional government with full executive powers", Moscow and Tehran prefer to talk about a "national unity government". And therein lies the rub. The "transition" described in the 2012 Geneva communique means that Syria's current rulers – and in particular President Assad himself – will eventually play no political role. This is what is being demanded by the opposition, all camps of which agree that although negotiations with the current rulers must be entered into without preconditions, they will not govern with them in the future. After all, there can be no new start without a change of government. 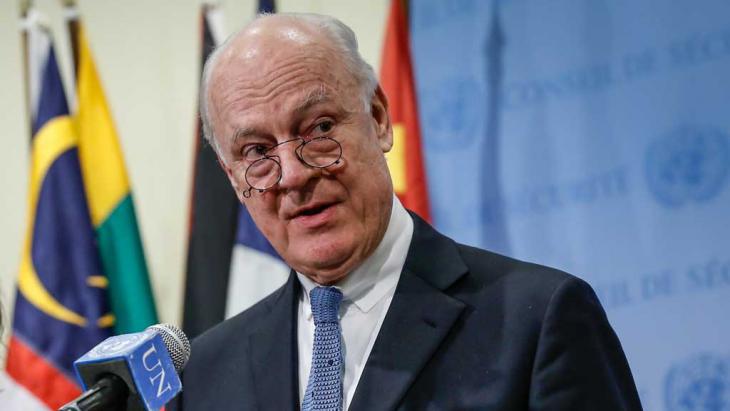 International action on hold: according to Kristin Helberg, UN special envoy Staffan de Mistura (pictured here) wants to split Syrians into four working groups to discuss the protection of civilians, legal questions, the fight against terrorism and the rebuilding of the country. While this sounds constructive, "it may well be a lengthy process – meaning that all those still clinging to a military resolution [...] will have gained time, and the international community can relax, telling itself that a diplomatic solution is on the way"

Russia and Iran, by contrast, want Assad to come to an agreement with representatives of the opposition and form a unity government under his leadership. It is an illusory plan because with more than 250,000 people dead and 12 million displaced, no member of the Syrian opposition is prepared to form a coalition with Assad. And so Moscow and Tehran are now concentrating on the fight against terrorism. They want to forge an international alliance against IS and involve Assad in it. The security and stability of the region is at stake here, they argue, and this has to take priority over everything else.

How true. Security and stability, that's exactly what this is about. It's an issue that affects Europe too, which is faced with hundreds of thousands of refugees. Unfortunately, however, Assad is incapable of creating security anywhere. On the contrary, he is the principal agent of "instability", having used his air force to cause at least seven times the number of civilian deaths that IS has, dropped prohibited barrel bombs (more than 11,000 since the UN ban in February 2014), used chemical weapons (more than 120 attacks with chlorine gas) and starved out around 500,000 people in sealed-off areas.

A credible alternative to Assad

It is Assad who is driving millions of people either across the borders into neighbouring countries and to Europe, or straight into the arms of IS. After all, every bombed hospital and every marketplace drenched in blood causes despair and radicalisation. If neither moderate forces nor the international community can offer the Syrians protection, then IS looks like their last hope. The terrorist group is already painting itself as the Sunnis' defensive force in a global war against Islam. This is a catastrophe that shows that IS must be combated not only militarily but also ideologically.

To this end, one thing above all else is needed: a credible alternative to Assad. Only when barrel bombs have stopped raining down on apartment blocks, and children are no longer starving to death before their parents' eyes can the Syrians put up a united front against IS. The end of the Assad regime is the precondition for a victory over IS. The sooner Iran and Russia come to realise this as well, the better. After all, they are the ones securing Assad's military and financial survival.

Without his two sponsors, Assad would not be in a position to retain the areas important to him in Damascus and along the coast. But Assad is expensive and brings minimal returns – at best a Hezbollah-controlled mini state on the border with Lebanon to protect Iranian interests and a secured Russian naval base in Tartus. But is that enough? This is where diplomacy must begin. If Russia and Iran were to receive guarantees from another party that Assad can no longer offer, then negotiations would have some hope of success.

The West also needs an alternative. It is not stopping Assad, not because it condones mass murder or wants to destroy Syria (as many Syrians believe), but because it doesn't know what will follow him. As long as that is the case and until it is clear that the power vacuum in Damascus will not be filled by IS or the al-Nusra Front, Americans and Europeans continue to prevent effective support for the rebels and a collapse of the regime.

Using barrel bombs against his own people: civil war between the Assad regime and several rebel groups has been raging in Syria since 2011. According to UN figures, over 250,000 people have been killed to date and 12 million people have been displaced (around 7.8 million of them within Syria)

Unfortunately, their hesitation has brought them exactly what they were trying to prevent, namely the dominance of radical groups in Syria. That being the case, how can allied opponents and moderate rebels take over, counteracting a collapse of state institutions and creating security for all?

The first step would be to prevent the regime from bombing any civilian attempt at alternative structures into oblivion. In the areas of Syria controlled by the opposition, there are eight democratically legitimated provincial councils, as well as hundreds of local councils and civilian groups occupied with the excavation of mass graves and the procurement of food and medicines, instead of with the development of a new Syria, which is what they have spent years demonstrating for.

Safe zones as the key to a political solution

These Syrians – whether rebels, activists, opposition members or just citizens – all have one single demand: protection from the regime's air raids. In all probability, the only thing required here is a declaration that the regime's helicopters and fighter jets will no longer be tolerated in a particular area. After Turkey announced that it wanted to create a safe zone in collaboration with the USA, the barrel bombs stopped falling on Aleppo for a while.

However, this action must not be confined to an Erdogan-style Turkish-enforced mini safe zone, intended to prevent the emergence of a cohesive Kurdish region. It would be much better to have the most international force possible protect a densely-populated area in Aleppo and Idlib provinces.

A zone like this would not just save lives, allow refugees to return, and provide the opposition with the necessary space for the development of a new order. It would also force Assad to the negotiating table and make it easier for Russia and Iran to rethink their policy.

Too expensive, unwanted, impossible to implement internationally? All just excuses. Safe zones are the key to a political solution in Syria. Without them, there is no alternative to Assad. And without a transition in Damascus, there will be no victory over IS.

Kristin Helberg
© Qantara.de 2015
Translated from the German by Ruth Martin

Research project "The Global Qur'an", brainchild of Professor of Islamic Studies Johanna Pink and sponsored by the European Research Council, analyses the history and ... END_OF_DOCUMENT_TOKEN_TO_BE_REPLACED

A wedding extravaganza of bright colours, flowers, feasting and dancing, yet the bride, Nefie Eminkova, who comes from Bulgaria's Pomak – Muslim – minority, can see none of it. ... END_OF_DOCUMENT_TOKEN_TO_BE_REPLACED

As the Western world emerges from a holiday season made less festive by COVID-19, millions of children in Afghanistan are starting 2022 facing the prospect of famine, illness, and ... END_OF_DOCUMENT_TOKEN_TO_BE_REPLACED

Every year in December, the team at Qantara.de takes a look back at the articles that proved most popular with our readers. This year is no different. Here is a run-down of the ... END_OF_DOCUMENT_TOKEN_TO_BE_REPLACED

Jesus – Issa in Arabic – doesn’t merely enjoy the highest place among the prophets in the Koran. He is also revered in Islam’s mystical tradition for his message of love and mercy ... END_OF_DOCUMENT_TOKEN_TO_BE_REPLACED

The military in Sudan has never waged war against a neighbour, but it has already staged 17 coups. Tens of thousands of people are risking their lives to oust the military by ... END_OF_DOCUMENT_TOKEN_TO_BE_REPLACED
Author:
Kristin Helberg
Date:
Mail:
Send via mail

END_OF_DOCUMENT_TOKEN_TO_BE_REPLACED
Social media
and networks
Subscribe to our
newsletter