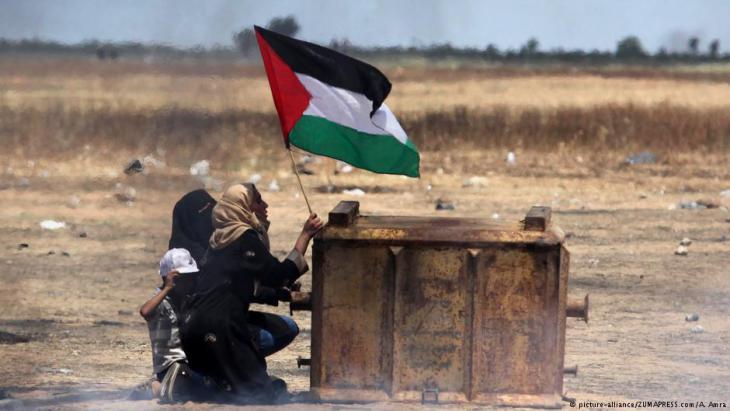 Clashes along the Israeli-Gazan border
What hope for the Palestinians?

For months people in Gaza have been taking to the streets in protest at their intractable predicament. But the Palestinians have lost all their advocates, says Bettina Marx from the Heinrich Boll Foundation in Ramallah

The situation of the Palestinians was never as hopeless as it is today. Seventy years after the founding of Israel and 51 years after the Six Day War, when Israel appropriated Palestinian territories in the West Bank and Gaza, they are quite literally facing oblivion. All their dreams of nationhood have not been realised. The so-called peace process, which began with the Oslo Accords 25 years ago, has clearly failed. The former Israeli Prime Minister Ariel Sharon declared it dead as early as January 2001.

Today, his successor Benjamin Netanyahu no longer shies away from openly rejecting the idea of a Palestinian state alongside Israel – a concept that underpins the entire peace process. On a recent visit to Berlin, he even denied that Israel was occupying Palestinian territories. Addressing the media, he said that Abraham settled in the region between the Mediterranean and Jordan 4,000 years ago and that this justifies the Jewish claim. Palestinians only happened to be there coincidentally, he said.

Bitter consequences for the Palestinians

As bizarre as this view may sound, it has bitter consequences for the Palestinians. After all, it means that their existence is only being tolerated by Israel, that their claims to their homeland, to equality and national self-determination are not recognised by Israel. Their resistance to the occupation, a right vested in international law, is viewed by Israel as illegitimate rebellion against the rightful rulers of the land and as terrorism – and dealt with accordingly.

Israeli prisons are full of Palestinians who have refused to bow down under the Israeli yoke. Even minors are brought before the military courts, which boast a conviction rate of almost 100 percent. Every night, heavily-armed military units patrol the occupied territories, rousing families from their beds, taking photographs of young people in a bid to later identify them as stone-throwers, arresting young men and with increasing frequency, women too.

Even Ramallah, the city where the Palestinian Authority is headquartered, the city that has been exclusively under Palestinian administration and security control since the Oslo Accords, is not spared these nightly raids. In the villages of the West Bank, where since the start of the peace process the Palestinians have lost more and more land to the settlers, where they are denied access to their fields and water wells, young people who protest against the occupying army are arrested or shot. 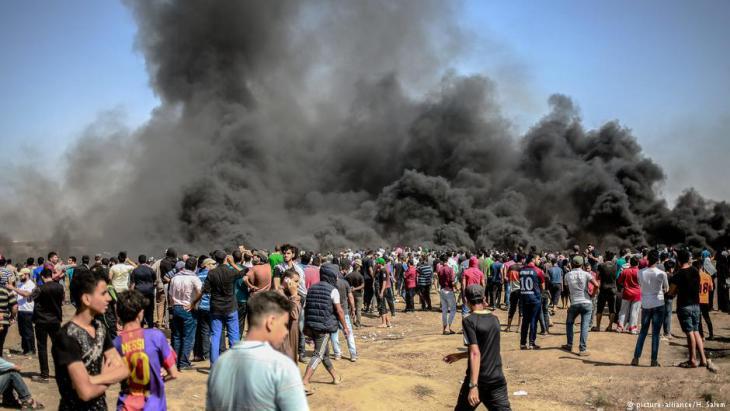 Renewed clashes along the border with Israel: tens of thousands of Palestinians have been protesting along the fence separating Gaza from Israel since 30 March. They are demanding the right to return to territory that is now part of Israel. On their minds: the expulsion and flight of hundreds of thousands of Palestinians as the Israeli state was founded in 1948, 70 years ago. In massive clashes with the Israeli army, more than 120 Palestinians have been killed and thousands more injured

More than 100 people were killed by Israeli snipers during last week's protests along the edge of the Gaza Strip. The victims included disabled people, journalists, medics and children. Israel has enough bullets for every demonstrator, said Likud deputy Avi Dichter. An Israeli army tweet claimed its soldiers' responses were accurate and measured and that they knew where every bullet landed.

Deserted by the world

Saudi Arabia and the Emirates are openly pushing for the establishment of diplomatic and economic relations with Israel and to this end, are ready to sacrifice solidarity with the Palestinians. The international community is also increasingly evading its responsibility. Under Donald Trump, the U.S. has positioned itself clearly on the side of Israel.

By recognising Jerusalem as the capital of Israel, legitimate Palestinian claims have been swept from the table. And with the reduction of funds for the UN aid organisation for Palestinian refugees UNRWA, hundreds of thousands of people in Gaza, the West Bank and neighbouring nations have been plunged into life-threatening poverty.

70 years after the foundation of the State of Israel and the accompanying Palestinian catastrophe of flight and expulsion, the Palestinians have arrived at the lowest point in their history: with no prospects of self-determination, without supporters and allies.

But despite such a desolate outlook there is one glimmer of hope, because against all odds, the Palestinian population between the Mediterranean and Jordan has grown to 6.5 million. Millions of people who feel a profound connection with this land and who will not disappear, regardless of how they have been deserted and of waning global interest in their fate.

In Nathan Englander's novel "kaddish.com", a Jewish man is plagued by feelings of guilt and regret for disregarding the rules of the Kaddish (prayer for the dead) for his deceased ... END_OF_DOCUMENT_TOKEN_TO_BE_REPLACED

Russia is leaving no stone unturned in its attempts to make the Islamic Republic an ally in the war against Ukraine. Fortunately for Vladimir Putin, the mullahs in Tehran are ... END_OF_DOCUMENT_TOKEN_TO_BE_REPLACED

It is possible to write about the Holocaust and the crimes of colonial powers without downplaying anything. In her latest book, Charlotte Wiedemann focuses on the numerous blind ... END_OF_DOCUMENT_TOKEN_TO_BE_REPLACED

The Palestinian militant organisation Hamas, with Hezbollah's help, is building up a military presence in Lebanon, the ultimate consequences of which could be devastating, writes ... END_OF_DOCUMENT_TOKEN_TO_BE_REPLACED

With his fist bump greeting for a man he previously called a pariah, US President Biden has paved the way for Saudi Crown Prince Mohammed bin Salman's return to the international ... END_OF_DOCUMENT_TOKEN_TO_BE_REPLACED

Asked about the Shoah, Palestinians often bring up the Nakba, the displacement of Palestinians associated with the founding of the state of Israel. An Israeli Holocaust researcher ... END_OF_DOCUMENT_TOKEN_TO_BE_REPLACED
Author:
Bettina Marx
Date:
Mail:
Send via mail

END_OF_DOCUMENT_TOKEN_TO_BE_REPLACED
Social media
and networks
Subscribe to our
newsletter