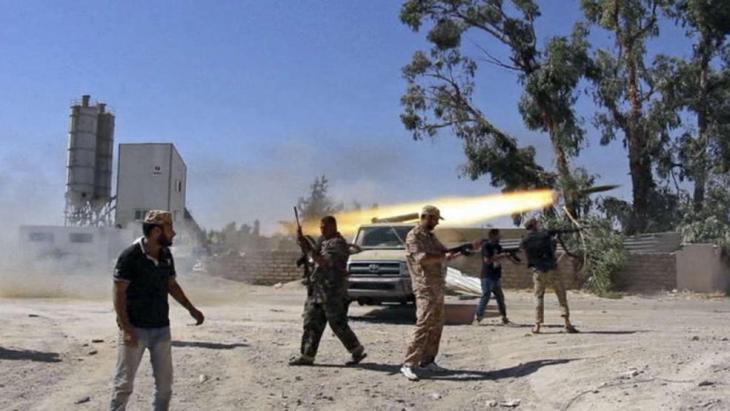 Clashes between rival militias in Libya

The battle for Tripoli

Like Benghazi before it, the Libyan capital, Tripoli, is now mired in chaos and violence. General elections held a month ago were not able to prevent the escalation in the conflict between rival militias. What triggered this development and what does the future hold for this troubled North African nation? By Valerie Stocker

Tripoli International Airport is a battlefield. Dozens of burnt out aircraft, a crumbling passenger terminal and a control tower riddled with bullets all bear witness to the fact that it will be a while before air traffic resumes here.

A few kilometres away, where rockets have hit a fuel depot, a giant cloud of smoke rises into the sky. Local residents are evacuating the area as militias continue to fight over the airport. At least a hundred people have been killed in the crossfire and indiscriminate shelling. Thus far, the Libyan capital has been all but spared the violence that hit Benghazi. Now, however, Tripoli is also descending into chaos, despite the fact that Libyans voted for a new legislature only a month ago.

In July 2012, Libya held its first free election after four decades of autocratic rule. The General National Congress (GNC) that emerged then is due to step down on Monday, 4 August 2014 and hand over power to the newly elected House of Representatives, which is also considered a transitional institution.

Meanwhile, a 60-member assembly that was elected in February has 18 months to draft Libya's new constitution. Once the constitution has been approved by public referendum, a permanent legislature and government can be elected, putting an end to the transitional period. This, at least, is what the political roadmap last amended by the GNC in February 2014 says. In parallel, however, the last two years have seen the emergence of informal power blocks whose infighting is now preventing the formation of a stable government.

The current conflict can be traced back to 2012, when Libyan voters had dozens of new political parties to choose from. What distinguished these parties from each other was the role they attributed to Islamic Sharia law and their dealings with former elites. "Azlam", regime remnants, as they are referred to, are people who held positions of responsibility under Gaddafi and now wish to be part of the new Libya. On the opposite side are the "thuwwar", mostly youthful revolutionaries, who want the root-and-branch reform of society. 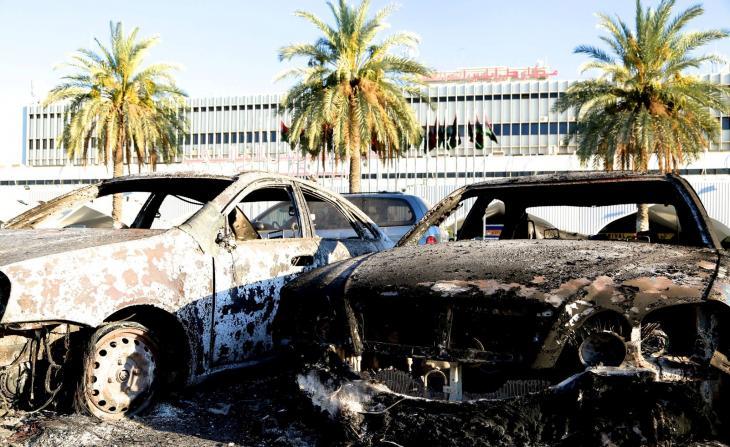 Caught in the crossfire of rivalling forces: militias from Zintan have been in control of Tripoli Airport since 2011, despite pledges to hand it over to the army. Fuel depots at the airport were recently set on fire when they were hit by rockets. Domestic flights have had to be diverted to Maitiga Airport

Congress as a conflict catalyser

The outgoing GNC is commonly viewed as conflict catalyser. The political landscape that formed in 2012 was immature, and consensus was difficult to reach in a legislature where 120 of the 200 members were independents.

Their rivalry crystallised around the Political Isolation Law, on the basis of which Libyans who held positions of responsibility under the previous regime are barred from holding office in post-revolution Libya.

In the spring of 2013, the pro-isolation lobby succeeded in pushing through a text that disqualifies Gaddafi-era officials who joined the opposition, while at the same time sweeping the reconciliation of the Islamist opposition with the regime from around 2008 under the carpet. Allied militias from the revolutionary stronghold and coastal town of Misrata laid siege to the congress hall until parliamentarians gave in to their demands. Since then, the liberals have been trying to bring about an annulment of the law. However, the judges of the Supreme Court who were meant to decide on the matter have repeatedly postponed their decision, fearing retribution. Another bone of contention between the two political camps was Prime Minister Ali Zeidan, whom the Martyrs Loyalty Block eventually ousted in March 2014. Zeidan's brief abduction in October 2013 on the orders of a group of GNC members highlighted the fine line between politics and violence in Libya.

The other camp practices equally little restraint. Militias from the small mountain town of Zintan – also a revolutionary stronghold, but now aligned with the liberals – has been in control of Tripoli Airport since 2011, despite pledges that it would hand over the facility to the army.

The liberal coalition has repeatedly tried to use coercion to change the rules of the game. In February of this year, for example, Zintan militias ordered parliamentarians to step down, and their ally Major-General Khalifa Haftar declared a coup.

Haftar's military campaign against radical Islamist militias in eastern Libya is now in its third month. The offensive, dubbed "Operation Dignity", weakens the revolutionary Islamist coalition, owing to its leaders' close ties with militias in Benghazi. 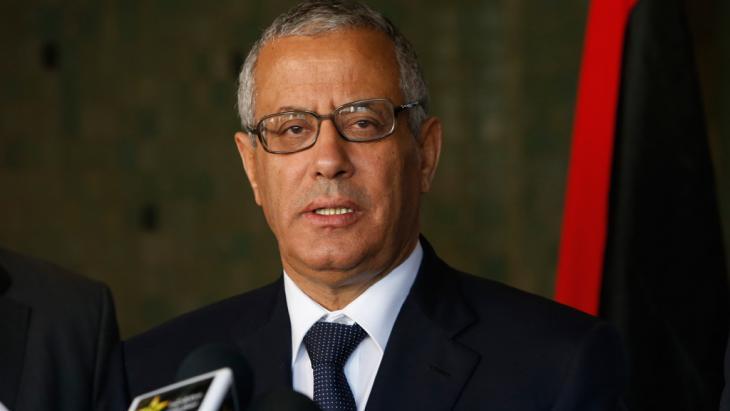 In March 2014, Prime Minister Ali Zeidan (pictured here) was ousted after losing a vote of no-confidence in the Libyan parliament. A few months previously, in October 2013, Zeidan had been kidnapped by a security force linked to the Interior Ministry on the orders of a group of parliamentarians

A loss of influence

The coalition now fears it will lose its present influence once sovereignty has been transferred to the House of Representatives.

The Islamists are said to have done badly in the legislative elections on 25 June, although the allocation of seats this time around is less clear than it was in 2012 as there are only independent candidates and no party lists this time.

The attack on Zintan's bases in Tripoli can be seen as an attempt to retain the upper hand in the power struggle. Controlling the airport not only generates income, it also allows for the surveillance of travellers and arms smuggling. On several occasions, entire weapons shipments disappeared from the tarmac only to reappear in the hands of Zintan forces.

Sooner or later, their opponents were bound to intervene, which they now have with the present "Operation dawn". The Islamists control the much smaller military airport of Maitiga, in Tripoli, as well as Misrata Airport. This triggered rumours that the mission's objective was not the takeover of the airport but its total destruction. If no other alternatives are found, the revolutionary Islamist coalition will benefit considerably.

The battle for the airport resulted in the departure of foreign diplomats and other expatriates. Maitiga Airport has little capacity, and at present, the only other possible exit route is the road to Tunisia. 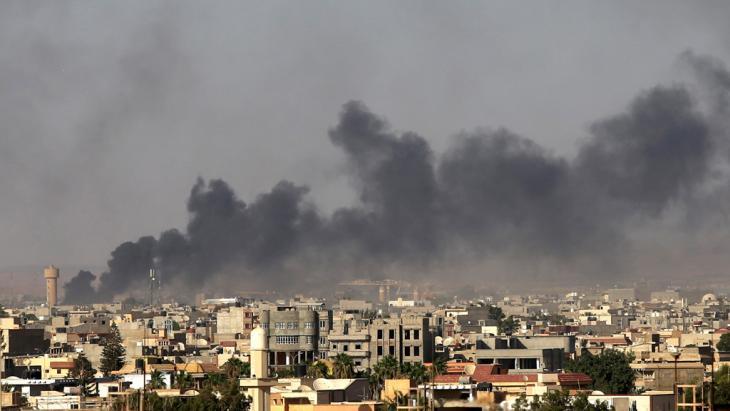 Unrest and fighting between rival militias has spread from Benghazi to Tripoli. Plumes of black smoke indicate where rockets hit a fuel depot containing 90 million litres of highly explosive substances. Three years after the fall of Muammar Gaddafi's regime, Libya is no longer safe, warns the German Foreign Ministry

Not a drop of fuel

It does not look as if foreign nationals are being specifically targeted, but past incidents are proof enough of the potential risks. For residents in the capital, daily life is becoming an increasing challenge, with lengthy power-cuts and massive queues at petrol stations every day.

If the fire at the petroleum depot is not contained soon, Tripoli will have no fuel at all. But for the warring militias, the destruction is no reason to stop. At checkpoints in Misrata, drivers heading to Tripoli are forced to pour out any extra fuel they have taken with them in order to prevent a single drop arriving in Tripoli, says a local reporter on his arrival in the capital.

While the militias fight for power and territory, it is the ordinary citizens who are losing out the most in the present conflict. A peaceful solution seems increasingly elusive. There is also doubt that the House of Representatives that is supposed to take over in a few days will do any better than the GNC.

Lately Libyans, including the fragile acting government, have been calling for international peace forces. But the chaos that reigns in Libya and the unfavourable climate on the international stage make this scenario rather unlikely.

Home
Print
Newsletter
More on this topic
Women in Libya: High hopes brutally dashedPower struggle in Libya: A permanent state of chaosTwo Years after the Overthrow of the Gaddafi Regime: Are We Facing a Second Somalia?
Related Topics
Democracy and civil society, Islamism | Political Islam, Libya after Gaddafi
All Topics

War was ever a man's game. In Libya, where political rivals have been fighting it out for years, the needs of women have all too often been overlooked. Yet the country is going to ... END_OF_DOCUMENT_TOKEN_TO_BE_REPLACED

Dubbed the "Butcher of Hama", Syria's Rifaat al-Assad is accused of embezzling millions in European real estate. Like him, many regional rulers have preferred to keep their ... END_OF_DOCUMENT_TOKEN_TO_BE_REPLACED

According to the latest Reuters tally, more than 2.54 million people are now reported to have been infected by the novel coronavirus globally and 177,004 have died. As Muslims ... END_OF_DOCUMENT_TOKEN_TO_BE_REPLACED

Despite his main focus being on his childhood and youth, spent between East and West, Riad Sattouf also describes the current state of the Arab world in his much-lauded graphic ... END_OF_DOCUMENT_TOKEN_TO_BE_REPLACED

Around the Islamic world, lockdowns and curfews are being extended and religious ceremonies are being cancelled outright in the hope of slowing the spread of COVID-19. Here’s the ... END_OF_DOCUMENT_TOKEN_TO_BE_REPLACED

While some are beginning to protest the lockdown, others are unable to bury their loved ones in accordance with Islam. Here’s the latest from across the region END_OF_DOCUMENT_TOKEN_TO_BE_REPLACED
Author:
Valerie Stocker
Date:
Mail:
Send via mail

END_OF_DOCUMENT_TOKEN_TO_BE_REPLACED
Social media
and networks
Subscribe to our
newsletter