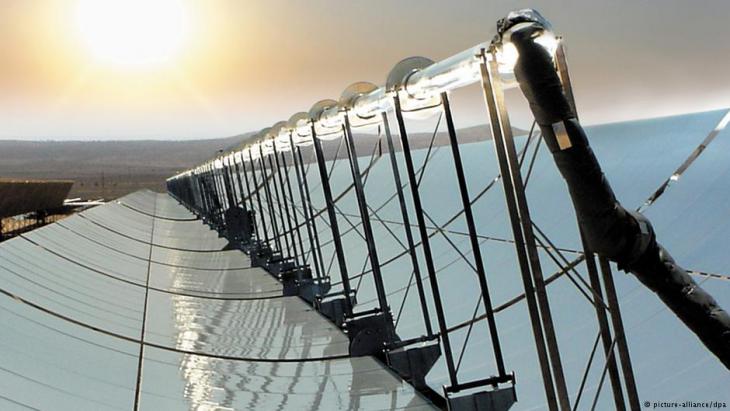 Climate change and the West′s energy policy
Robbing the poor

When we hear about news of renewable energy projects, one must be forgiven for thinking that it′s all beautiful and shiny. But scratching a little bit beneath the surface of this language of "cleanliness", "shininess" and "carbon emission cuts" will reveal another picture, a picture of big capital robbing land and resource rights from the global south in order to safeguard the energy security of the global north.

TuNur solar project in Tunisia is a joint venture between Nur Energy, a British-based solar developer and a group of Maltese and Tunisian investors in the oil and gas sector. In July, the company has filed a request for authorisation from the Tunisian Ministry of Energy, Mines and Renewable Energy for an explicitly export-oriented solar project with a capacity of 4.5 GW.

Like Desertec and the Ouarzazate solar plant in Morocco, this new project is a renewable energy grab or what has been termed ′Green Grabbing′: the appropriation of land and resources for purportedly environmental ends. It involves massive land grabs (10,000 hectares) as well as extensive water usage to clean and cool the panels in arid and semi-arid regions to export energy to the UK and Europe. Given that Tunisia depends on its neighbour Algeria for its energy needs and faces increasingly frequent power cuts, it would be outrageous and unjust to prioritise exports over the urgent needs of local people.

Forced liberalisations and a scramble for resources

It is in a regional context of forced trade liberalisation as well as a scramble for influence and energy resources that we should understand such mega-projects. These projects are mainly designed (usually by Europeans themselves) to satisfy Europe′s need for diversifying energy sources away from Russia as well as contributing to its carbon reduction targets. And what better region to achieve these aims than North Africa and West Asia (NAWA): an area well endowed with natural resources, from fossil fuels to sun and wind. 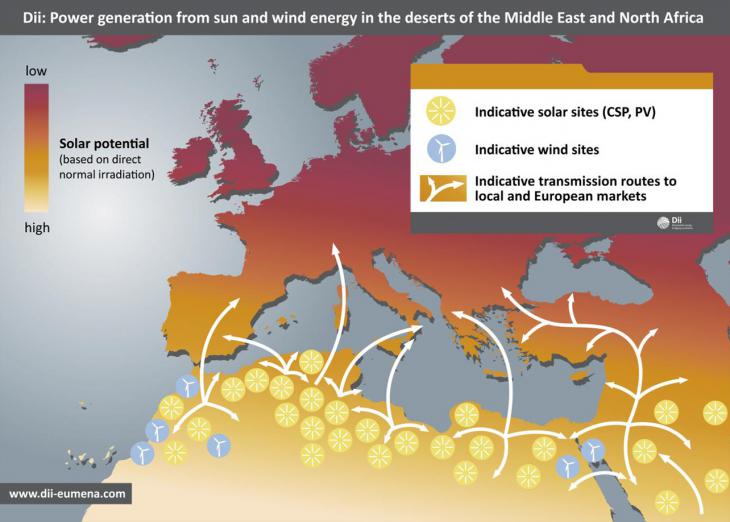 It seems that a familiar ′colonial′ scheme is being rolled in front of our eyes: the unrestricted flow of cheap natural resources from the global south to the rich industrialised north, maintaining a profoundly unjust international division of labour. Interestingly, the map of the energy routes to Europe coincides with the same pathways for migration from the African continent. Fortress Europe builds walls and fences to prevent human beings from reaching its shores for sanctuary but it accepts no barriers to resource grabs

The Sahara is usually described as a vast empty land, sparsely populated and in need of ′development′. This pretext provides a golden opportunity for Europe to continue its extravagant consumerism and profligate energy consumption at the expense of the global south. Language recasting southern regions and countries as objects of development is reminiscent of the “civilising mission” used to justify mass dispossession throughout the colonial period, as well as policies designed to control the populations and their environments.

It seems that a familiar ′colonial′ scheme is being rolled in front of our eyes: the unrestricted flow of cheap natural resources from the global south to the rich industrialised north, maintaining a profoundly unjust international division of labour. Interestingly, the map of the energy routes to Europe coincides with the same pathways for migration from the African continent. Fortress Europe builds walls and fences to prevent human beings from reaching its shores for sanctuary but it accepts no barriers to resource grabs.

British and EU foreign policy aims to lock North African energy resources (including renewable ones) into the European grid and is heavily influenced by arms and corporate interests. The priority has always been EU "energy security" and interests, usually in a blatant disregard for the will of the people in the region.

Since Ali Khamenei, Iran's most powerful man, has openly and unconditionally come out in support of Putin's war in Ukraine, logistical help is on its way, with an allegedly ... END_OF_DOCUMENT_TOKEN_TO_BE_REPLACED

Tourists have been returning to Tunisia, Egypt and Morocco. But, given the global uncertainty caused by the Ukraine war, will the comeback be enough to save a struggling sector, ... END_OF_DOCUMENT_TOKEN_TO_BE_REPLACED

The highly controversial Indian blockbuster "The Kashmir Files“, on the exodus of Kashmiri Hindus in the 1990s, is characterised by unilateral representations, negative ... END_OF_DOCUMENT_TOKEN_TO_BE_REPLACED

"Flugt" is the world's first museum dedicated to the stories of those forced to flee. The new museum, which focuses on the fates of refugees then and now, is housed in a former ... END_OF_DOCUMENT_TOKEN_TO_BE_REPLACED
Author:
Hamza Hamouchene
Date:
Mail:
Send via mail

END_OF_DOCUMENT_TOKEN_TO_BE_REPLACED
Social media
and networks
Subscribe to our
newsletter