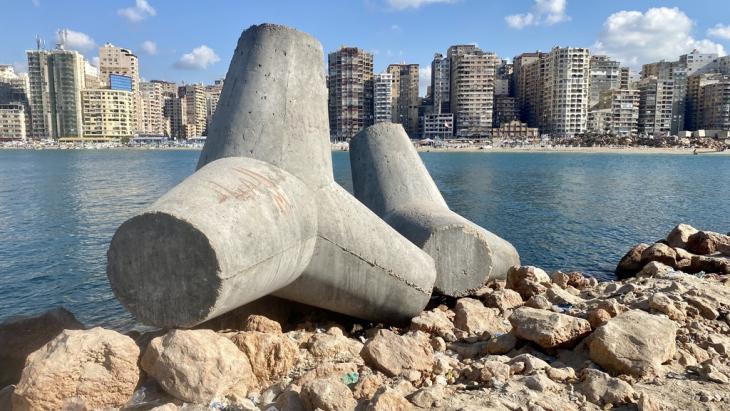 Climate change in Egypt
Alexandria or the sea?

The next UN climate change conference will begin in Egypt this weekend. In Alexandria, the effects of climate change can already be seen. Karim El-Gawhary reports from the stricken coastal city

The bulwarks in the fight against the effects of climate change lie two hundred metres off the coast, in the Mediterranean. A series of breakwaters constructed from enormous cement blocks, each one several hundred metres long, defy the surf. They are designed to protect the Egyptian city of Alexandria, its five million inhabitants, their houses, and archaeological sites such as the citadel in the spot where the lighthouse of Alexandria – a wonder of the ancient world – once stood, from the rising sea level, the ever-higher waves and the increasing storms.

Now, in late summer, the surf doesn’t present any great challenge. The waves splash tamely against the concrete. A few anglers have taken up positions on the blocks and are trying their luck. But the very fact that cranes, brought out to this point along a spit of land, are busy constructing new breakwaters gives the impression of a looming threat. Piece by piece, they sink concrete blocks as tall as a person into the sea.

They’re working against the clock; the threat that the sea poses to the city was already clear last winter. During storms, the Corniche – Alexandria’s famous coastal road – became part of the Mediterranean. Dramatic mobile phone footage showed metre-high waves crashing over the beach club and washing everything that wasn’t bolted down back into the sea.

During the last world climate change conference in Glasgow, Scotland, the host and former British prime minister Boris Johnson mentioned Alexandria in one of his speeches as one of the cities that would be completely swallowed by the sea if the global temperature were to rise by four degrees. 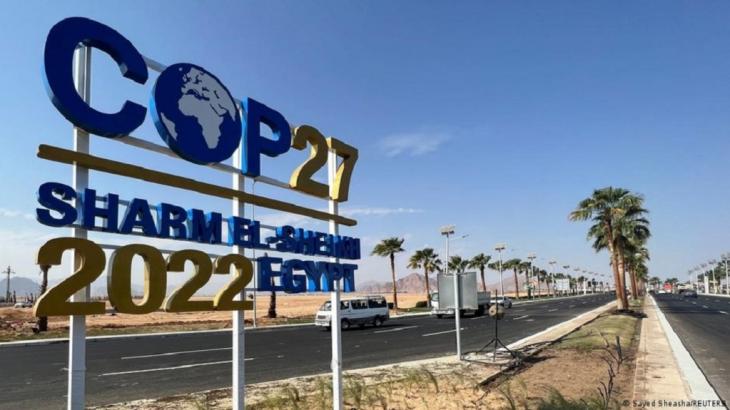 Egypt, host of the COP27 World Climate Conference: as well as further measures to reduce CO2 emissions and thereby limit global temperature rises, the conference with focus on “adaption”. Here, the issue is one of money – and fairness. Although Egypt is responsible for no more than 0.6 percent of global CO2 emissions, like many other countries

Mohamed El-Sherif, the governor of Alexandria, is also concerned – he is the one who invited us out onto the breakwater construction site to show us what measures the city is taking. "A lot of researchers say that the city of Alexandria is the fifth most endangered city by climate change, and that it could be underwater in the next 30 years," he says, coming straight to the point.

"The waves keep getting higher. They used to be a maximum of one and a half metres, and today they can be up to three or three and a half. And the frequency of winter storms is increasing, too," he adds, describing the effects of climate change that can already be felt today.

Egypt’s coastline, and in particular the low-lying Nile Delta, faces a double problem. The level of the Mediterranean is rising, while the land in the delta is sinking. A network of dams has therefore been built there in recent decades, to hold the worst effects at bay for the time being. “But that all costs money, a lot of money,” says Egyptian engineer Azza Abdel Hamid. She is, so to speak, the city’s most senior guardian against the sea.

Abdel Hamid heads up the authority tasked with protecting the coast in Alexandria. Her office is where kilometres-long breakwaters and dams are planned and projects turned into reality. "The measures needed simply for the city of Alexandria and the area around it cost the equivalent of over 82 million," she says. "We need a bigger budget, new options and new ideas – unconventional ideas, perhaps." She feels somewhat abandoned. 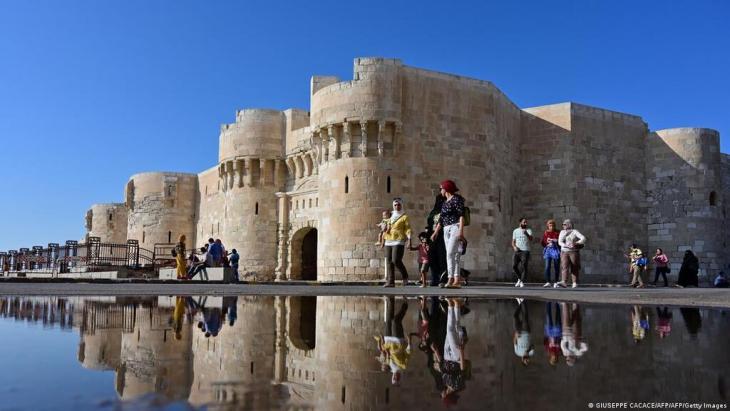 Qaitbey Fortress, part of Alexandria's historic coastal defences, is also at risk from rising sea levels. According to researchers, the Egyptian Mediterranean city is one of the five most vulnerable cities in the world to climate change. And Alexandria is running out of time. "Research shows that all the measures we’ve taken in recent years aren’t going to be sufficient. The waves are getting higher every year, rainfall is increasing, and the storms are getting more frequent and more severe," says El-Sherif

A question of fairness

"If we’re going to combat this, we need the help of the countries that have actually caused it all with their CO2 emissions. I think that will be an important theme at the next UN climate change conference." The conference, also known as COP27, will begin on 6 November in the Red Sea resort of Sharm El Sheikh. Alongside further measures to reduce CO2 emissions and thereby limit global temperature rises, there will be a second major theme at the conference: "adaption". This refers to measures for combatting the effects of climate change that are already apparent. The main issue, as ever, is money.

The fundamental question here is one of fairness. Egypt is responsible for no more than 0.6 percent of global CO2 emissions, and like many other countries of the global south, it feels it has been left to fight the effects of climate change alone. "Egypt’s CO2 emissions only make up a very small percentage of what is produced globally, but here in Alexandria we are bearing a substantial proportion of the risk," says El-Sherif, the city’s governor.

And Alexandria’s time is running out. "Research shows that all the measures we’ve taken in recent years aren’t going to be sufficient. The waves are getting higher every year, rainfall is increasing, and the storms are getting more frequent and more severe." Alexandria’s governor is worried about the future. Nor does the engineer Abdel Hamid hesitate for a second when responding to the question of who will win in the end: "If things carry on like this, then in the long term, it will be the sea, without a doubt."

Palme d’Or winner "Boy from Heaven" is a classic crossover film in which cultural elements are mixed together in haphazard and random fashion. Shady Lewis Botros bemoans the ... END_OF_DOCUMENT_TOKEN_TO_BE_REPLACED

In Doha, Arabs from Morocco, Tunisia, Egypt and Algeria are gathering to celebrate the first ever FIFA World Cup to be held on Arab soil. The criticism from Europe? Over the top, ... END_OF_DOCUMENT_TOKEN_TO_BE_REPLACED

November 2022 sees the Arab world firmly in the spotlight with the COP27 in Egypt and the FIFA World Cup in Qatar. Public trust in MENA governments is weak, thanks to their ... END_OF_DOCUMENT_TOKEN_TO_BE_REPLACED

COP27 in Sharm el-Sheikh is turning into a PR disaster for Egypt’s military regime. Instead of praise for the host, the news is full of solidarity for imprisoned activist Alaa ... END_OF_DOCUMENT_TOKEN_TO_BE_REPLACED

END_OF_DOCUMENT_TOKEN_TO_BE_REPLACED
Social media
and networks
Subscribe to our
newsletter