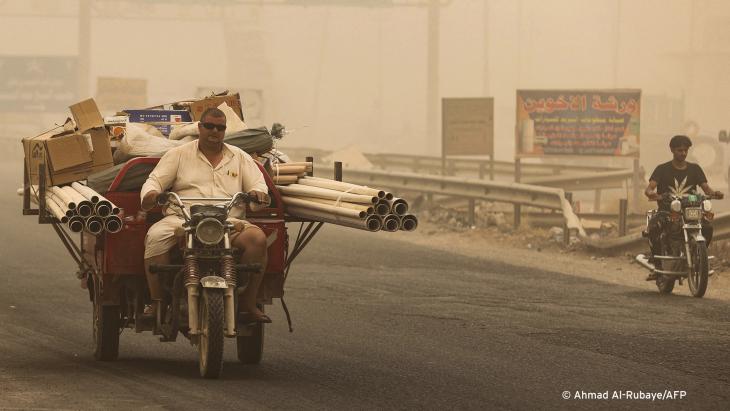 Another sandstorm has darkened Iraqi skies and it's hard to breathe, but Baghdad motorcycle delivery rider Milad Mitti doesn't have the luxury of missing a day's work. Like most people in the now blistering hot desert country, the 30-year-old battles on in frustration, wearing goggles and a grey neck warmer over his mouth and nose "so I can breathe

Iraq, still recovering from decades of war, is now facing new environment challenges on an unprecedented scale: since mid-April it has weathered a dozen dust storms that have often shrouded it in an otherworldly orange glow.

Thousands have been rushed to hospitals so far, and on Sunday, as has happened many times in recent weeks, airports were again forced to delay flights for hours due to the poor visibility.

Most Iraqis never bothered with face masks when the COVID-19 pandemic was in full swing, but they do now. "This is probably the first year that Iraq has had so many sandstorms," said Mitti in a busy square in the centre of the sprawling capital, which was baking in 40 degrees Celsius heat.

"It is very difficult to see," he said. "It's suffocating. It's hot. You have to drink juice and liquids to protect yourself."

A married man, he said he relies on the job which pays him about $600 a month. "I have a family," he said. "I have responsibilities."

On the deserted terrace of a cafe in the capital, the black faux-leather chairs were once more covered with a film of dust. A waiter, with a brown apron tied around his waist, wiped them with a wet cloth, then hosed down the floor with water. 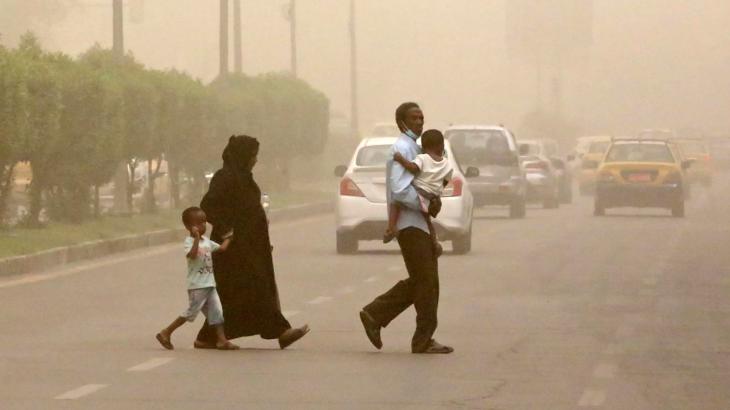 A family crosses a street during a sandstorm in the Iraqi capital Baghdad on 3 July: over the next two decades, Iraq can expect 272 dusty days per year, projected to surpass the 300-day mark by mid-century

In May, the sandstorms sent at least 10,000 people to hospitals with respiratory problems, claiming at least one life. Many patients were elderly or suffering from asthma, other respiratory ailments or heart disease, the most at-risk groups.

After Sunday's dust storm, more than 500 people were rushed to hospitals across the country for respiratory problems, health ministry spokesman Seif al-Badr said on Monday. At his Baghdad hospital, doctor Seif Ali Abdel-Hamza saw four patients on Sunday, as this time the sandstorm in the capital lasted just hours, not days.

"The more intense the storms get – the more storm days you have, as it has been the case in recent weeks – the more cases of choking there will be," said the chief resident at al-Kindy hospital. "The majority of patients suffer from chronic diseases, such as asthma or allergic bronchitis, the majority are elderly."

Oil-rich Iraq is ranked one of the five countries most vulnerable to the impacts of climate change and desertification, a key factor driving the sandstorms. Over the next two decades, it can expect 272 dusty days per year, and this is projected to surpass the 300-day mark by mid-century, said an environment ministry official. 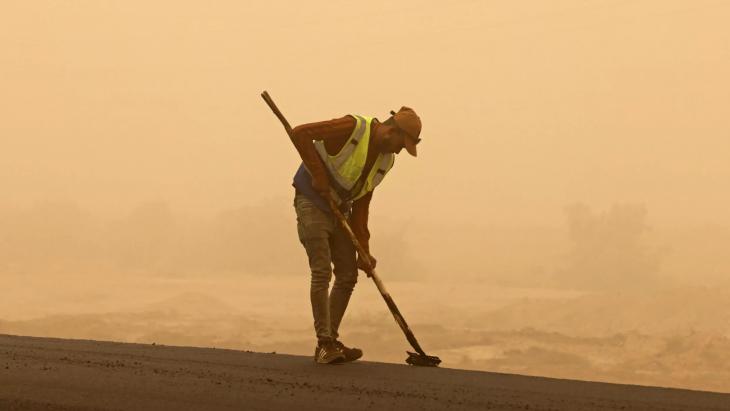 A worker sweeps a road during a sandstorm in Iraq's Diyala province, on 3 July: oil-rich Iraq is ranked one of the five countries most vulnerable to the impacts of climate change and desertification

To combat the phenomenon, authorities say they are considering planting "green belts" around cities. But the country of 41 million, despite the mighty Tigris and Euphrates rivers, also suffers from water shortages and declining rainfall.

"Before, there was a green belt around Baghdad. If we replant, it will be very useful," said electrician Razzak Jassem, 35. Lashing out at the state mismanagement, he denounced the government "failings" and "billions spent on nonsense".

"Every time the storm is over, you have to wash down the whole house," he said. "No matter how much you insulate, the dust gets in."

The worst thing is having to work during the sandstorms, he said during a work break in a shop where he was installing lighting. "You put on a mask, it gets in the way. You suffocate, you want to take it off," he said. "You take it off and there is the dust."

Yet Jassem, too, as a married father of three, will just have to keep going to make ends meet.

Home
Print
Newsletter
More on this topic
Climate heroes in Iraq: A life for the treesReform in Iraq: Muqtada al-Sadr must court the political eliteAlgeria‘s gas reserves: Is defending the environment terrorism?
Related Topics
Climate change, Eco-Islam, Ecology
All Topics

A French artist has used photos of torture from Abu Ghraib for an oversized artwork at the Berlin Biennale. Reactions from fellow artists have been mixed, with some criticising ... END_OF_DOCUMENT_TOKEN_TO_BE_REPLACED

Since Ali Khamenei, Iran's most powerful man, has openly and unconditionally come out in support of Putin's war in Ukraine, logistical help is on its way, with an allegedly ... END_OF_DOCUMENT_TOKEN_TO_BE_REPLACED

The Palestinian militant organisation Hamas, with Hezbollah's help, is building up a military presence in Lebanon, the ultimate consequences of which could be devastating, writes ... END_OF_DOCUMENT_TOKEN_TO_BE_REPLACED

In this essay, renowned Lebanese journalist and writer Hazem Saghieh asks whether the Arab Levant, which stretches from Iraq in the east to Egypt in the west, will remain an ... END_OF_DOCUMENT_TOKEN_TO_BE_REPLACED

Extreme drought in Iraq has given German and Kurdish archaeologists the unique chance to examine an ancient Bronze Age city that was hidden beneath the water of a reservoir for ... END_OF_DOCUMENT_TOKEN_TO_BE_REPLACED

With his fist bump greeting for a man he previously called a pariah, US President Biden has paved the way for Saudi Crown Prince Mohammed bin Salman's return to the international ... END_OF_DOCUMENT_TOKEN_TO_BE_REPLACED
Date:
Mail:
Send via mail

END_OF_DOCUMENT_TOKEN_TO_BE_REPLACED
Social media
and networks
Subscribe to our
newsletter