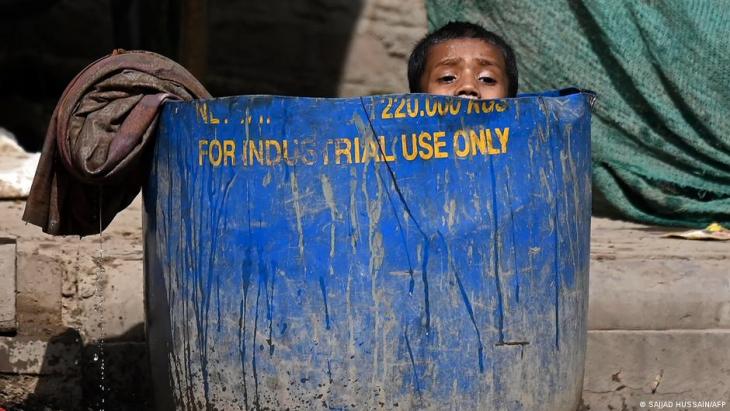 As the scorching sun beat down on his fruit cart, Mohammad Ikrar dreaded another day of tossing out dozens of rotting mangoes and melons – a regular practice now, as India grapples with an unprecedented heatwave.

The 38-year-old does not own a refrigerator, meaning his fruit quickly spoils. By the end of the day, any leftover produce is usually only good to be fed to passing stray cows. Since April, Ikrar said he has lost up to 3,000 rupees ($39) a week – nearly half of his average weekly earnings.

"This heat is torturous. But if I want to buy an AC (air conditioner) or fridge one day, I have to do this," said Ikrar, wearing a long-sleeved shirt and white headwrap to keep cool in the 44 degrees Celsius (111.2F) heat.

At home, Ikrar and his family suffer hours-long power cuts day and night, rendering the ceiling fan useless in their one-room house in Noida, a satellite city of New Delhi. He sends all three of his children to a school fitted with air coolers for "respite" from the heat.

"I sweat all day, then sweat all night. There is no way to properly cool off. I haven't experienced anything like this since I moved here eight years ago," he said. Ikrar provides a snapshot of the threat Indians face from a lack of access to cooling amid widespread blackouts.

Almost 323 million people across the country are at high risk from extreme heat and a lack of cooling mechanisms such as fans and refrigerators, found a report released on Tuesday by Sustainable Energy for All (SE4ALL), a U.N.-backed organisation. 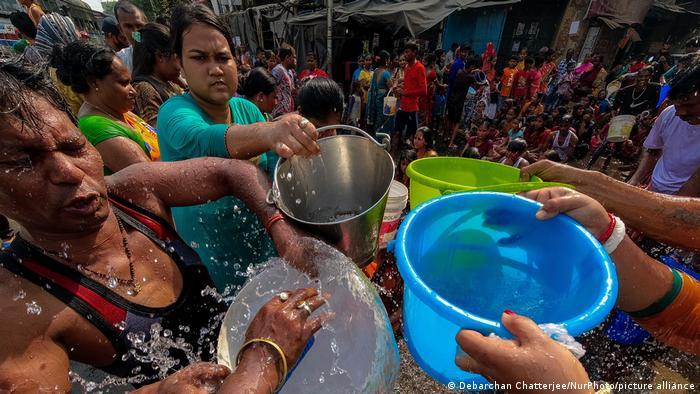 In this photo, people are seen struggling to fill water from a municipal tanker in the city of Calcutta. India's summer season typically starts in April and continues until early July, regularly claiming scores of lives due to heatstroke and gastrointestinal infections. However, experts say that this year, the heat wave arrived by early March, in line with a rise of average summer temperatures.

India topped a list of "critical" countries, also including China, Indonesia and Pakistan, which have the largest populations facing heat-related dangers, ranging from immediate overheating deaths to impacts on food security and livelihoods.

Temperatures in the New Delhi area soared above 49C (120F) in some regions last week after India recorded its hottest March in 122 years and an unusually hot April. Temperatures are expected to cool as monsoon rains arrive in June.

India's electricity demand has hit a record high with a surge in the use of air conditioning triggering the worst power crisis in more than six years. But, like Ikrar, not everyone can beat the heat.

Although nearly all households in India have access to electricity, only a fraction of its 1.4 billion population owns any cooling appliances, found SE4ALL. As demand for cooling appliances will soar in coming years, it will also add pressure to India's overstretched electricity systems and lead to a potential increase in emissions, said Brian Dean, head of energy efficiency and cooling at SE4ALL.

"(This) in turn further exacerbates the risk of longer and more extreme heatwaves," he told the Thomson Reuters Foundation.

He urged authorities to quickly implement the India Cooling Action Plan, launched in 2019, which aims to cut cooling demands by up to 25% by 2038 through measures including developing new cooling technology and designing buildings with natural airflow. 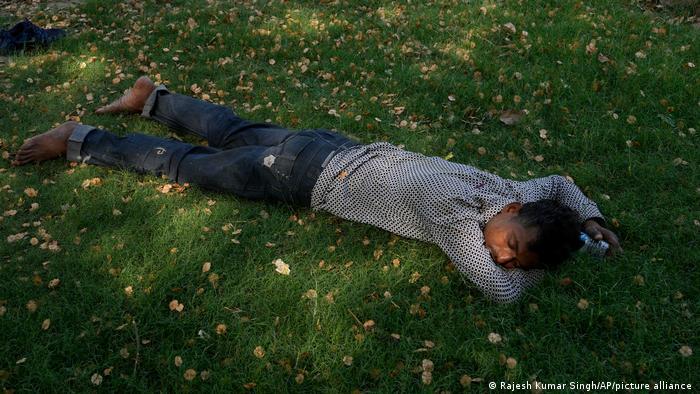 The 'tip of the iceberg': in India, government data shows at least 25 people have died from heat stroke since late March, the highest toll in the past five years. Heat is a largely invisible killer which can be hard to pinpoint as a cause of death, he said, especially as it often affects elderly and unwell people and can be caused by indirect exposure such as being trapped in small, poorly ventilated homes

Scientists have linked the early onset of an intense summer to climate change, and say more than a billion people in India and neighbouring Pakistan are in some way at risk from the extreme heat.

SE4ALL found Pakistan's largest city of Karachi – along with many others including Mumbai and Dhaka in South Asia – are among those most at risk from inadequate cooling.

In India, government data shows at least 25 people have died from heatstroke since late March, the highest toll in the past five years. The official number is just "the tip of the iceberg", said Dileep Mavalankar, head of the Indian Institute of Public Health, a private university in Gandhinagar in the western state of Gujarat.

Heat is a largely invisible killer which can be hard to pinpoint as a cause of death, he said, especially as it often affects elderly and unwell people and can be caused by indirect exposure such as being trapped in small, poorly ventilated homes.

Such indirect exposure cases make up about nine in 10 heat deaths, he said, with India likely counting only about 10% of the true total. 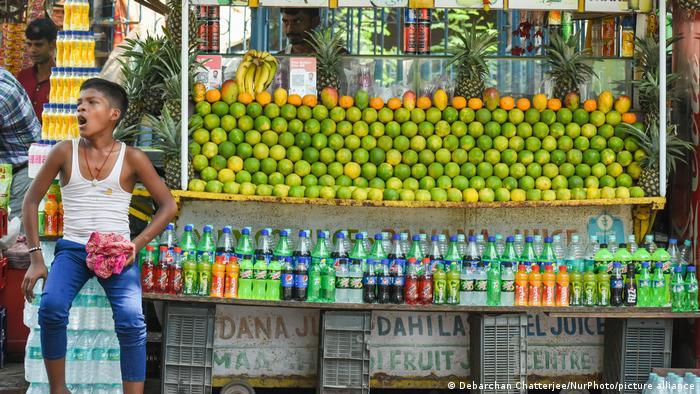 A boy sits outside a juice shop as he waits for a customer. The long spell of unusually hot temperatures has been accompanied by a power crisis in India, subjecting millions of people to hourslong power cuts. While critics have accused the government of mismanagement, the steep rise in prices of imported coal due to the Russia-Ukraine conflict has also had an impact

Mavalankar helped implement South Asia's first Heat Action Plan (HAP) in Ahmedabad in Gujarat in 2013, after the city saw more than 1,300 deaths in a 2010 heatwave. He credited the HAP for saving up to 1,200 deaths every summer.

The HAP, which includes early warning text messages to mobile phones, has expanded to nearly two dozen heatwave-prone states and more than 130 cities and districts. The plan also directs people to seek respite from heatwaves in "cooling centres" such as air-conditioned public buildings, shops and malls, temples, and parks. For some, they can be life-saving.

Mavalankar and SE4ALL's Dean both called for the broader use of "cool roofs" with reflective surfaces or coatings to reduce temperatures in low-income and informal housing. From building heat-resistant homes to creating more green spaces, Mavalankar said prompt action is needed to help the poor and vulnerable survive a hotter world.

"Temperatures may increase by three to five degrees in coming summers," he warned. "We have to prepare right now."    (Thomson Reuters Foundation)

Pakistan and India have fought three wars and countless skirmishes, but as summers get hotter with climate change, their peoples are united by love for a cooling 115-year-old pink ... END_OF_DOCUMENT_TOKEN_TO_BE_REPLACED

Anger in the Middle East is spreading over comments made by an official of India's ruling BJP about the Prophet Muhammad, with various countries summoning New Delhi's envoy and a ... END_OF_DOCUMENT_TOKEN_TO_BE_REPLACED

Heavy rains and storms are causing huge floods and high water in both countries. Tens of thousands of people have had to leave their homes so far. ... END_OF_DOCUMENT_TOKEN_TO_BE_REPLACED

Twenty-eight-year-old photojournalist Masrat Zahra documents the situation in India-administered Kashmir with her camera. In this interview with Elisa Rheinheimer, she talks about ... END_OF_DOCUMENT_TOKEN_TO_BE_REPLACED 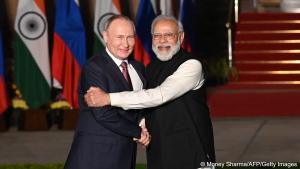 India’s failure to condemn Russian aggression in Ukraine at all costs reflects its longstanding relations with Moscow. But as the war enters a more brutal phase, it’s a price that ... END_OF_DOCUMENT_TOKEN_TO_BE_REPLACED
Date:
Mail:
Send via mail

END_OF_DOCUMENT_TOKEN_TO_BE_REPLACED
Social media
and networks
Subscribe to our
newsletter