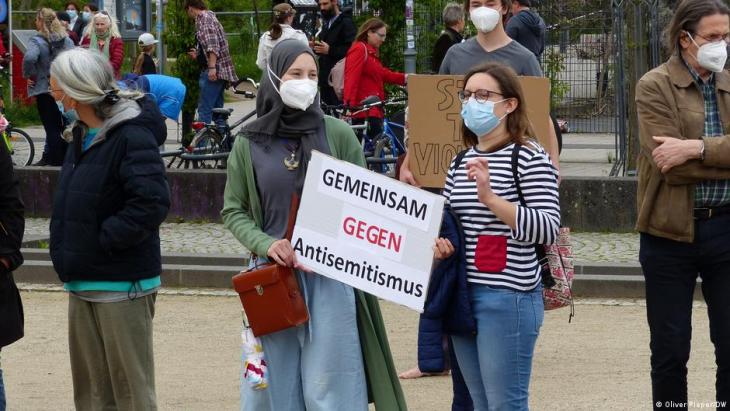 An unusual organisation brings Jews and Muslims together to fight hate and promote dialogue. In the small central German city of Marburg they have been jointly calling for an end to the violence in the Middle East. Oliver Pieper reports

It's not every day that members of the Jewish and Muslim communities come together. But even more notable is the association that Monika Bunk and Bilal El-Zayat founded one year ago, called "Together: Marburg Society for Jewish-Muslim Dialogue" ("Gemeinsam e.V. Marburger Gemeinschaft für Jüdisch-Muslimischen Dialog").

"We won't bring the Middle East conflict to Marburg, where we can't solve it," the two activists say as they make their appeal to some 100 participants of a vigil for peace in Israel and the Occupied Territories. They make sure that placards and slogans don't go too far. Bunk explains "you can criticise Israel's policies all you want, but you can't deny its existence or recognition."

Their initiative in Marburg is an example of how it's possible to overcome divisions: Bunk is Jewish, a theologian; El-Zayat is Muslim, a surgeon. They've known each other for 20 years, and they've both received a German integration prize for their activism.

The recent Middle East conflict put the two communities' trust to the test. Marburg's Islamic community includes around 5,000 people, and some of its members are Palestinians from the Gaza strip. Emotions ran high. El-Zayat tells of one member whose uncle lost his house due to the recent airstrikes. 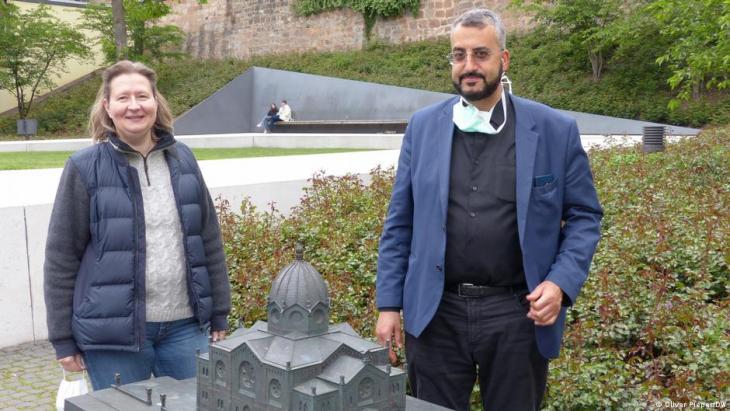 Monika Bunk and Bilal El-Zayat in the garden commemorating the synagogue burnt down by the Nazis in Marburg in 1938. Seven years ago, during the Gaza war in 2014, Bunk and El-Zayat were already called upon as crisis managers and mediators. Back then, they were invited to the town hall with clear instructions to do something: "Do something. Make sure that a small war does not break out here in Marburg." Bilal El-Zayat shakes his head when he thinks back on it. "Such nonsense. First of all, we are in Germany. And secondly, you're allowed to criticise Israel, of course, but sensibly and objectively, and not on posters, demonstrations or in front of synagogues"

Seven years ago, during the 2014 Gaza War, Bunk and El-Zayat were asked to take on roles as crisis managers and mediators to prevent the Middle East conflict from leading to a confrontation in Marburg.

Freedom of speech and its limits

Trust has grown over time in the Jewish-Muslim association, and members make sure religion and politics are strictly divided. Despite differences of opinion, there is a common cause: The desire to live together peacefully in Marburg – even if sparks can fly during political discussions. "It's not all sunshine and roses. Sometimes things really heat up here," El-Zayat says. "But we've learned over the years to have more understanding for the opposing side." Bunk steps in to correct. "Although really there is no opposing side, because there are no opponents here."

Bunk recalls the quarrel she and El-Zayat had over the publication of cartoons in Western media poking fun at the prophet Muhammad. They were miles apart from each other when it came to the question of how far freedom of speech could go. 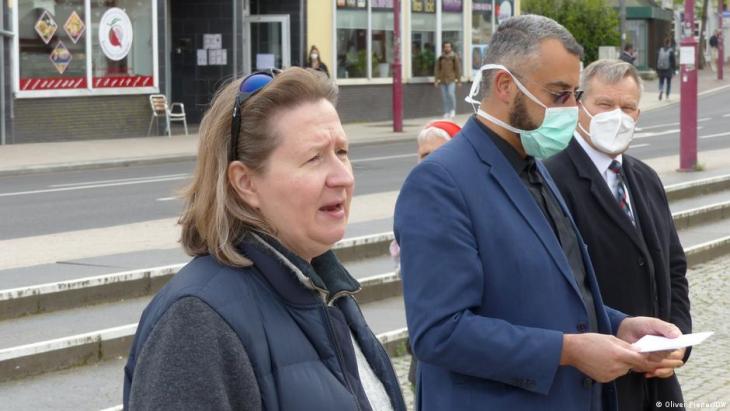 Monika Bunk and Bilal El-Zayat with Lord Mayor Thomas Spies, who says: "We will not let ourselves be divided in Marburg". The conflict in the Middle East cannot be solved in Germany, but perhaps Marburg is a good example of how it can be avoided. Bunk and El-Zayat, the Jew and the Muslim, the theologian and the surgeon, were both awarded the Integration Prize by the State of Hesse for their commitment

After the recent vigil, she grabbed a Muslim friend who had posted a picture online of the outline of Israel completely filled in by a Palestinian scarf. "I told him, you are welcome to criticise Israel's policies, but not to negate its right to exist. That's where my line is crossed. Please take that down," says Monika Bunk. "He then answered me, 'Wow, now that you say it, I see that you are right. I was just caught up in the moment and didn't even think about it'."

In today's times, when social media adds fuel to the fires of interreligious conflict, the association's founders try to solve things by talking.

First and foremost comes the organisation's motto: Jews and Muslims have more things in common than divide them.

In 2019, when they heard of yarmulke, Bunk and El-Zayat were immediately reminded of Muslim women, who often face hostilities because they wear a headscarf. The pair quickly organised a "Yarmulke-Headscarf Day" in Marburg. 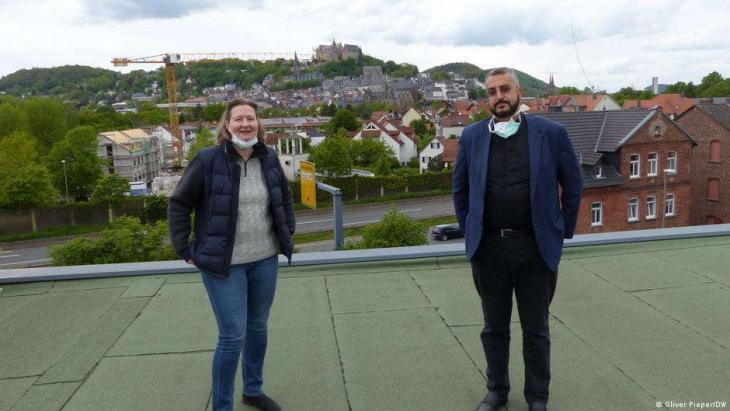 Monika Bunk and Bilal El-Zayat on the roof of the mosque, with Marburg Castle in the background. "Prejudices against Jews and Muslims are lowest where there is the most contact," emphasises Bilal El-Zayat

Both of them recall the successful joint protests by Jews and Muslims in 2012 for legislation on the circumcision of young males. They also highlight the religions' similar burial rituals.

When Bunk and El-Zayat organised a tour bus to visit the Buchenwald concentration camp, Jews, Christians, and Muslims took part.

In the future, the group has planned chess tournaments and cooking courses as ways for people to get to know each other better, because food always brings people together.

"We've certainly made a difference, but I don't know if in our lifetimes we'll experience coexistence between Jews and Muslims being the most normal thing in the world," Bunk says, thinking about the future. Still, she often gets approached by young Muslims on the street who tell her that she and El-Zayat are role models.

El-Zayat adds, "We Muslims in Germany have to recognise that a partnership with Jews in this country can help us. And it's exactly the same the other way around."

On 15 June, the "Islamkolleg" in Osnabruck officially launched its new training programme for imams in German. The college is intended to prepare Islamic theologians for their ... END_OF_DOCUMENT_TOKEN_TO_BE_REPLACED

For centuries, the great classical Persian author Hafez has inspired German writers. Translations, adaptions and homages have been created in his wake, and the process continues ... END_OF_DOCUMENT_TOKEN_TO_BE_REPLACED

Business in the Moroccan city of Tangiers is booming due to its location at the nexus of global trade routes. But many locals are failing to reap the benefits. What they crave ... END_OF_DOCUMENT_TOKEN_TO_BE_REPLACED

Morocco and the European Union are at cross purposes when it comes to the Western Sahara. And, as Germany does not support Moroccan claims to the territory, a major conflict has ... END_OF_DOCUMENT_TOKEN_TO_BE_REPLACED

Jewish voices are much more diverse than the public often sees. Jewish men and women who oppose the injustice of Israeli occupation in the West Bank deserve our respect and ... END_OF_DOCUMENT_TOKEN_TO_BE_REPLACED

They’ve already got the Louvre; they’ll soon have a Guggenheim Museum as well – and now the Emirates have added literature to their quest for cultural supremacy in the Arab world ... END_OF_DOCUMENT_TOKEN_TO_BE_REPLACED
Author:
Oliver Pieper
Date:
Mail:
Send via mail

END_OF_DOCUMENT_TOKEN_TO_BE_REPLACED
Social media
and networks
Subscribe to our
newsletter