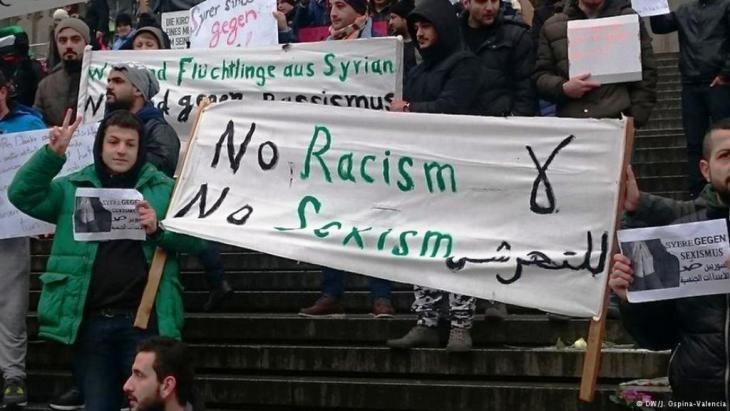 The groper in my home

Penning yet another article on Cologne can only make you unpopular. But our writer Elisabeth Lehmann has nevertheless given it a shot: her partner is "North African"

Maybe I shouldn't write this article. It can only go pear-shaped. I'll be clipped around the ears with it. From all sides. I can already see it coming. In the frenzy of media hysteria, I'll only get myself into hot water with another text on the "attacks on German women on New Year's Eve by hordes of North Africans". And in any case, it's all been said already.

Incidentally, my partner is one such "North African". Like most couples of our age, we met at a party – no, not in a station forecourt.  It was at a time when the term "fellow citizen with a migrant background" was very fashionable in Germany. So the FCMB and I became a couple and since then Germany has conducted many debates and our relationship has been described using a variety of politically correct terminology.

It's fun calling my partner names. If I want to annoy him, I simply call him the Arab. He then likes to narrow it down, specifying that he is in actual fact a Berber. In this respect he is very German. He is actually a German, because he has a passport from the Federal Republic of Germany. But as a city administration official pointed out to me recently, my partner is only a "passport German". I had to Google it to find out what it meant. It's not a pleasant term, but there you go.

However, as far as his mind is concerned, I think my partner's quite German. After all, as the Arab-Berber interjection shows, he is the master of precise statement, which aligns him completely with the tenor of official public discourse. With every new debate on migrants and non-Germans, politics, the media and friends of political correctness are always coming up with new, supposedly yet more precise sub-headings for sub-groups. It could probably be called differentiated generalisation.

So since New Year's Eve I've switched to "North African". Arab is too general. It would include the Syrians, the refugees. And they weren't even there. Moreover, they are victims, without exception. That there may quite possibly be people, individuals, among them, perhaps even nice ones – out of the question. At this point the oft-quoted "good people" will give me a clip around the ear, I know. But I can live with that, because I'm one of them. 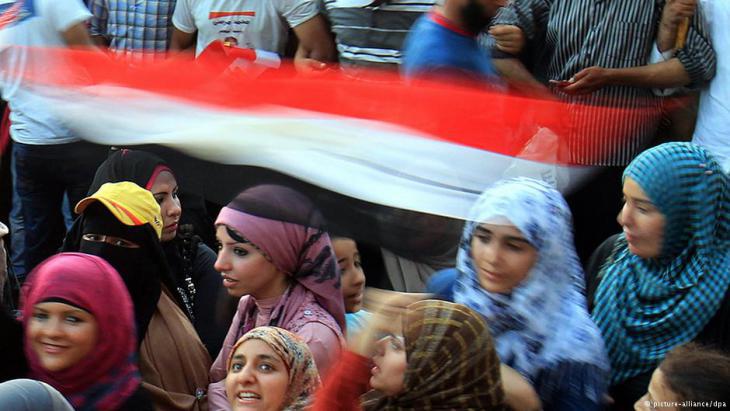 The daily ritual for Egyptian women: running the gauntlet against the looks, wolf-whistles, lecherous comments and physical advances of men in Cairo. A report issued in 2015 by the United Nations found that over 99 percent of Egyptian women had already experienced some sort of sexual harassment, ranging from the supposedly harmless comment to rape

An unwanted hand on the backside

So, my partner, the "North African" was born in Morocco, incidentally, just by chance. Would I have perhaps responded differently to his advances if "Cologne" had happened before our first meeting? I don't know. What I do know is that when we first met he didn't grope me, but conversed with me in a very "civilised" manner.

At this juncture, I'll likely get it in the neck from the women who were harassed in Cologne, who will accuse me of trivialising what happened to them. I can already see the commentaries claiming that I'm playing down what happened, relativising the violence, mocking the victims, saying that I would think differently if it had happened to me. But at this point I must explicitly request, dear critic, that you read this text right to the end!

Because, it did happen to me. For two years, every day. We only just returned to Berlin a few weeks ago. We have just been in Egypt, the stronghold of sexual harassment. "Taharrush", or harassment, was the first Arabic word I learned in Cairo.

Me in experimental mode: on a sunny April day, I take a stroll across one of the many bridges over the Nile. I wear long baggy cloth trousers, a non-descript T-shirt with half-length sleeves, flat shoes, subtle makeup. And nevertheless, the men's gazes stick to my body. I feel naked. The balance sheet after about 10 minutes: eight declarations of love, called "pussy" four times and an unwanted hand on the backside.

Yes, disgusting, humiliating, the nastiest weapon that can be deployed against a woman, because, as a woman, you rarely have an opportunity to dodge it. Even if you consider yourself to be confident and emancipated. In Egypt, I would have liked to have been able to leave my breasts at home sometimes, just to have a bit more peace. "Taharrush" is a national sport and every day for two years, I wracked my brains over the possible reasons for it.

I tried looking at Islam. It must be because in Islam, the man feels superior to the woman, considers her as his possession. But what if my Nile Bridge acquaintances also included Coptic Christians? Moreover, as the days went by I met more male Muslims who didn't fit my highly logical scheme. Who reacted to the Neanderthal behaviour of their fellow men with as much disgust and indignation as I did. Who were deeply ashamed at what has repeatedly happened at large-scale events since the revolution and what is remarkably similar to the events in Cologne. Crowds of men surround a woman, touch her up, rape or abuse her. 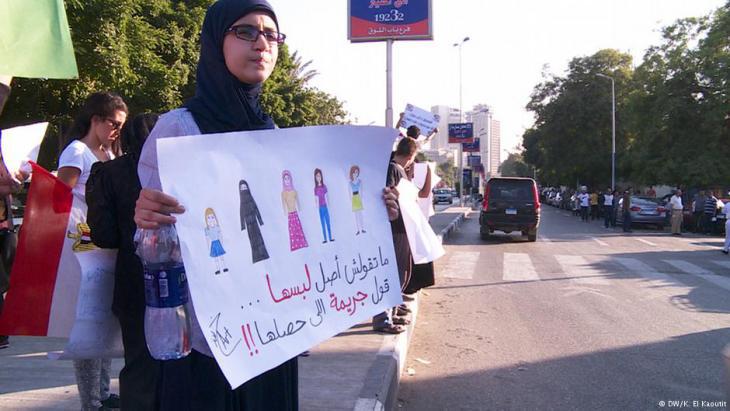 I witnessed it live on Tahrir Square during the inauguration of President Abdel Fattah al-Sisi. There's also a video of it doing the rounds on the Internet, which had such a lasting, shocking effect on me just from watching it that I never attended another large-scale event in Egypt again. Now I'll likely be berated because I've just confirmed all the cliches that exist in Germany on the subject of the Arab world. Along the lines of: "Look, it was obvious that all Arabs, sorry, North Africans are like that."

So now's the moment for the big surprise: few nations in the world – and sexual harassment of women occurs everywhere, I repeat: everywhere! – are taking such huge steps to counter the problem as Egypt. The men of this country fall into two camps – gropers and cavaliers. Both types are extreme in their expression, with some that enjoy humiliating women and others organising self-defence courses, emergency hotlines for those affected, yes sometimes even forming groups of bodyguards.

At an election campaign event, dozens of men took it upon themselves to protect me, the Western female journalist, from dozens of men on the other side of the spectrum. They formed a circle putting a comfortable two metres of distance between me and the groping crowd. I had not asked anyone for help. That is simply how society functions.

A hick in my hotel room

For sure, Egypt is an extreme example. But the phenomenon "woman talks to man = wants sex" is also very familiar to me from other countries.  Before my Cairo adventure I lived and worked for a while in Russia, where I often travelled alone. Although I could speak the language, it was a while before I learned to read the social codes. As a woman socialised in the West, I think nothing of communicating with men although I may not know them, without any kind of underlying intention.

If a man spoke to me in Russia and as polite as I am, I answered, this was, for my male counterpart, usually interpreted as meaning "she wants to go to bed with me". No sooner said than done – and I had the odd Siberian hick intoxicated by cheap vodka standing in my hotel room. What to do in such a situation? Scream, just scream. That usually helped, in my experience.

So what conclusions can be drawn from these experiences? Groping has nothing to do with a person's country of origin. Groping is male. Uh oh – now I've messed things up with this group of readers as well. I did say I should never have written this article!

Elisabeth Lehmann is a freelance journalist who writes for television, radio and printed media. She has spent much of her career in Eastern Europe. During the last two years, however, she lived and worked in Cairo.

On 15 June, the "Islamkolleg" in Osnabruck officially launched its new training programme for imams in German. The college is intended to prepare Islamic theologians for their ... END_OF_DOCUMENT_TOKEN_TO_BE_REPLACED

For centuries, the great classical Persian author Hafez has inspired German writers. Translations, adaptions and homages have been created in his wake, and the process continues ... END_OF_DOCUMENT_TOKEN_TO_BE_REPLACED

Business in the Moroccan city of Tangiers is booming due to its location at the nexus of global trade routes. But many locals are failing to reap the benefits. What they crave ... END_OF_DOCUMENT_TOKEN_TO_BE_REPLACED

Morocco and the European Union are at cross purposes when it comes to the Western Sahara. And, as Germany does not support Moroccan claims to the territory, a major conflict has ... END_OF_DOCUMENT_TOKEN_TO_BE_REPLACED

Jewish voices are much more diverse than the public often sees. Jewish men and women who oppose the injustice of Israeli occupation in the West Bank deserve our respect and ... END_OF_DOCUMENT_TOKEN_TO_BE_REPLACED

They’ve already got the Louvre; they’ll soon have a Guggenheim Museum as well – and now the Emirates have added literature to their quest for cultural supremacy in the Arab world ... END_OF_DOCUMENT_TOKEN_TO_BE_REPLACED
Author:
Elisabeth Lehmann
Date:
Mail:
Send via mail

END_OF_DOCUMENT_TOKEN_TO_BE_REPLACED
Social media
and networks
Subscribe to our
newsletter