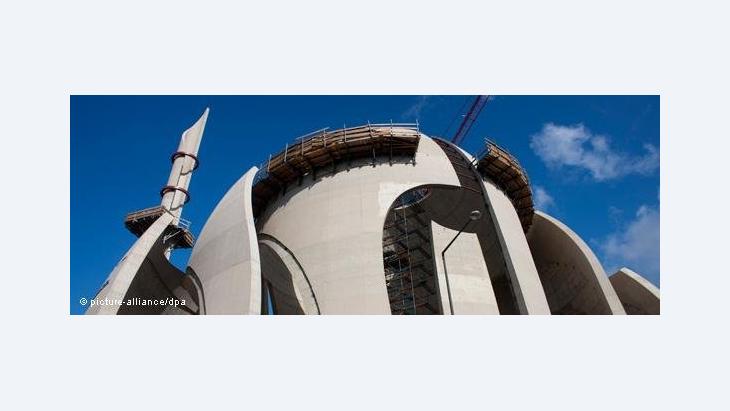 Just a few months before the completion of ﻿Cologne's new central mosque, the debate about the building continues unabated, although the debate now circles more around its architecture and location than around political or social issues. Zulfikar Abbany has the details

﻿Despite the fact that construction of Cologne's new central mosque has not even been completed, the building has already endured years of criticism. There are those who have complained about the height of its minarets and those who call it "der Meiler" (from "Atommeiler", the German word for nuclear reactor) because they say it looks like an atomic facility.

When plans were first unveiled for the redevelopment of the central mosque, some critics even saw it as an opportunity to start a fundamental debate about the city's Turkish Islamic community.
The right-wing group Pro Köln and the prominent social commentator Ralph Giordano campaigned to have construction stopped. Giordano's focus was not the mosque; he complained instead that integration of the Turkish Islamic community had failed and that the problem was Islam.

Now, six years into the project, its architect, Paul Böhm, says the mosque is itself an act of integration. "This is one of the most important buildings I have ever designed," Böhm told Deutsche Welle. "It has given me a chance to do something that is not only for a specific group of people, but for the whole community." 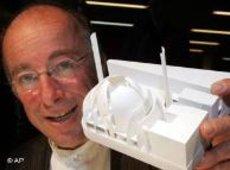 For architect Paul Böhm, the construction of Cologne's new central mosque is in itself an act of integration

​​Speak to a supporter of the mosque and you will soon hear descriptions like "open", "inviting" and "light". Paul Böhm says the very design of the building aims to communicate a sense of openness and invitation. "The prayer hall is very open and we have this huge square, which invites people from all religions," he says. There is also a massive dome, which appears to open like a bud, and the two minarets.

Before construction began in November 2009, the minarets were often targeted as being too big. Pro Köln and others said the minarets, which were taller in the original plans, threatened to overshadow Cologne's famous cathedral. Cologne Cathedral is protected as a UNESCO World Heritage Site, which means that city planners are obliged to protect its visual integrity. There were protests, newspaper articles, television and radio programmes and a raging, public debate. Eventually, a compromise was found: the size of the minarets was reduced.

Ayse Aydin of the Turkish-Islamic Union, which commissioned the new mosque, says the debate was often "hurtful". But, she says, it also raised awareness and made people acknowledge the local Turkish community. "Spiritual houses are open places, they are inviting, and a building like this can help reduce people's fear and provide a platform for communication," says Aydin.

A German mosque in Europe 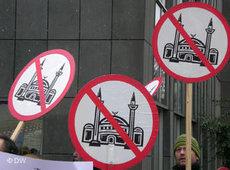 Ever since the first plans for the new mosque, the right-wing populists of Pro Köln have been campaigning against the building with xenophobic slogans

​​It will also help create a new network of impressive sites in Cologne. The city was heavily bombed in the Second World War and has never recovered architecturally. Put simply, it's not a very pretty city. But the central mosque is one of the few new major buildings that has its own distinct style and is not made of the usual uniform steel and glass. It is a showcase for Islamic architectural heritage.

Islamic architecture tends to soak up its environment, so there are mosques that are part of a western Roman tradition and others that are more eastern. Cologne's central mosque has itself been described as modern and German. Ayse Aydin even jokingly calls it Kölsch, which is also the name of the local dialect and beer.

Jokes aside, the head of architectural history at Cologne University, Norbert Nussbaum, calls the mosque a "milestone for religious architecture in Germany." He also says it is also distinctly Turkish. "This is a building that could be located anywhere in the Turkish state," says Nussbaum. "It has a particular shape that's found in Ottoman architecture. It's a Turkish mosque in the middle of the Islamic Diaspora, which is good because most of the Muslims in western Germany are of Turkish origin, so it gives them a homely atmosphere."

Under Suleiman the Magnificent, a long-reigning sultan of the Ottoman Empire during the sixteenth century, Ottoman architecture was renowned for its mosaic patterns. Istanbul's famous Hagia Sophia mosque being a good example. To this day, mosaics are a popular characteristic of Turkish design.

Cologne's central mosque will open in early 2012 without much interior design other than natural light, which will flood in through a flank of windows. But in time, the mosque could come to feature classic Ottoman mosaics or other decoration from Turkish design heritage. The Turkish-Islamic Union says it wants the mosque to grow with the community and that it will decide on an interior design at a later stage. 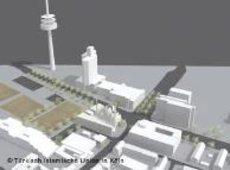 Situated at a busy intersection beside a petrol station, the mosque's location is not what one might expect for a grand, spiritual building in the heart of a city

​​There is another striking sight (and odour) at the mosque – that of a petrol station right next door. It's not what you might immediately associate with a grand, spiritual building in the heart of a city, but that is the reality of the situation. Paul Böhm laughs when asked about it and says he hopes his design is "strong enough to overcome the petrol station." From a city planning perspective, the petrol station may be an eyesore, but it is practical all the same.

Susanne Gross is an architect and city planner. Although she is not directly involved in the building of the mosque, she admires it greatly. As far as she is concerned, the petrol station is irrelevant. "Who knows whether it'll be there in 30 years," she says. "The design [of the mosque] is right, especially the stairway that leads you up from the street, almost alongside the petrol station, right into the main courtyard."

And that is the point. Visitors are unlikely to stand in front of the mosque without being drawn into it by the open stairway, inevitably creating a constant stream of traffic. "Well, the petrol station is funny," concedes Nussbaum, "because it evokes an atmosphere of traffic and religious traffic."

The power of architecture

Whether that traffic will include a stream of non-Muslims is hard to tell. But the intention is there; it is not quite written on the wall, but mixed into the mortar. Susanne Gross believes that architecture shares the same power as art because architecture draws in the community. Buildings are where people gather, meet and mingle. "We can offer possibilities," agrees architect Paul Böhm, "like the possibility for men and women to pray in the same room and the possibility for non-Muslim people to come here. But it is just an offer. It's up to the people to use it and make this architecture work."

Most new architecture needs time to settle, to become a true part of its environment and to be accepted by the community. In the case of Cologne's central mosque, this process has already begun.

Home
Print
Newsletter
More on this topic
Green Light for the Construction of the Cologne Mosque: The Triumph of ReasonGerman Architect To Build Mosque: ''Muslims Should Not Try to Hide''
Related Topics
Dialogue of Religions, Integration in Germany, Islam and the West, Islam in Germany, Migration in Germany, Muslims in the West
All Topics

Germany’s electorate includes some 7.4 million citizens with international roots, while many more millions of residents from abroad aren’t allowed to vote. Both groups are often ... END_OF_DOCUMENT_TOKEN_TO_BE_REPLACED

No other Western poet was arguably so well-versed in the Koran or so fascinated by Islam as Germany's national hero, Goethe. In a new publication that examines all Goethe's ... END_OF_DOCUMENT_TOKEN_TO_BE_REPLACED

Migrants are often maligned as being responsible for Europe's problems. Yet their integration is in Europe's interest. Michael Thaidigsmann believes that a long-term vision is ... END_OF_DOCUMENT_TOKEN_TO_BE_REPLACED

How could the Afghan government and its institutions collapse so quickly? That things were going wrong in Afghanistan had been obvious for a long time, yet the West preferred to ... END_OF_DOCUMENT_TOKEN_TO_BE_REPLACED

Shida Bazyar's new novel is the literary surprise of the year. It tackles the pressing issues of our time, and yet it is timeless. This is a story of friendship, marginalisation ... END_OF_DOCUMENT_TOKEN_TO_BE_REPLACED

The swift fall of Kabul recalls the ignominious fall of Saigon in 1975. Beyond the local consequences – widespread reprisals, harsh repression of women and girls, and massive ... END_OF_DOCUMENT_TOKEN_TO_BE_REPLACED
Author:
Zulfikar Abbany
Date:
Mail:
Send via mail

END_OF_DOCUMENT_TOKEN_TO_BE_REPLACED
Social media
and networks
Subscribe to our
newsletter