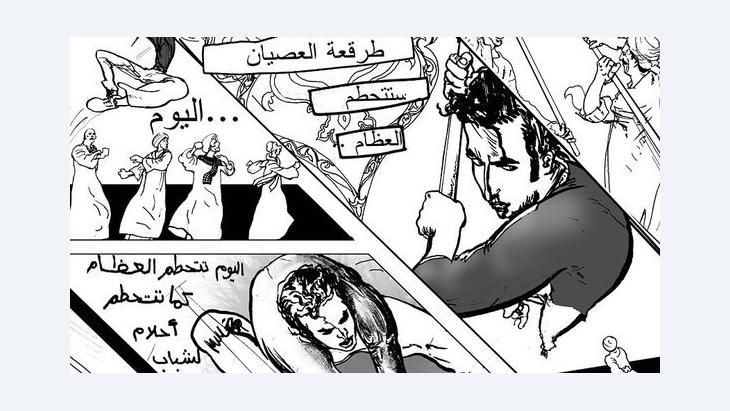 Comics Artists in the Arab World
Swimming against the Tide

Many of the Arab comics and graphic novels produced before and during the Arab Spring are both critical of society and politically provocative. Despite the uprisings in the region, difficult working conditions and the strict constraints of media censorship still pose a big problem for the rebellious artists. A report by Charlotte Bank

This year's Erlangen International Comic Salon, which took place from 7 to 10 June, introduced a series of young comics artists from the Arab world and presented their work in a high-profile exhibition.

Hardly known at all in Europe until now, the work of these young artists has also been regarded in their homelands as peripheral to the art and cultural scene. As far as the general public in the Arab world was concerned, comics and animation films were for a long time nothing more than children's entertainment. To this day, only a small amount of people know that the genre can address topical, even explosive subject matter.

Initiatives such as the Egyptian comic magazine TokTok are trying to buck the trend. The publication was founded in early 2011 by a group of young graphic designers and illustrators with the aim of providing a vibrant forum for Egypt's nascent comic scene. As well as publishing new stories, the initiators also want to make a point of informing people about their predecessors in this art form.

Hand in hand with local traditions 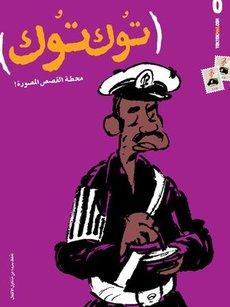 The Egyptian magazine 'TokTok' not only wants to be a forum for Egypt's comic scene, but also wants to make sure people know that there is a tradition of comics in Egypt and that the genre is not just a Western import

​​This is why the very first edition, which was entirely self-financed, published an article about the illustrator and caricaturist Hegazi, one of the most significant caricaturists of the 1960s, who was known for his drawings about the hardships of the "little man on the street".

The creators of TokTok are particularly keen for people to understand that their art did not develop out of nowhere, that it is not simply copying Western models, but is clearly rooted in a domestic tradition.

There have also been other positive developments in recent years, one of which is the International Comic Festival, which has taken place in Algiers since 2008.

However, many countries in the region offer hardly any opportunities for publication. This is why the Internet plays an important role as a platform for disseminating work. This has been especially true since the Arab revolutions.

Alongside the advantages of extensive dissemination, the Internet also makes it possible to evade the state censorship with which many artists would otherwise come into conflict. The graphic novel Metro by the Egyptian artist Magdy El-Shafee was confiscated by the Egyptian censors a few weeks after it was published in 2008. The artist and the publishers were imprisoned and required to pay a steep fine upon their release.

In the form of a detective story, the book took as its subject matter some of Egypt's social problems, such as poverty, misery and the widespread corruption among the elites, in other words, precisely the problems that sparked the protests at the beginning of 2011. Like so many other artistic endeavours that address these subjects and were created before the revolution, El-Shafee's work seems almost prophetic in retrospect.

But despite the social relevance and the recognition they sometimes receive (El-Shafee's works are displayed in the Townhouse Gallery, the best-known independent gallery in Cairo), most comics artists are dependent on other sources of income. Many therefore produce comics aimed primarily at children, work as graphic designers or pursue entirely different professions.

The situation is much the same in other Arab countries too. Despite the fact that there has been an active comic scene in Syria for many years, for example, not many graphic novels have been published there to date, and although there have been several attempts to start up a comic magazine for adults, these attempts have all ultimately failed due to a lack of sponsorship.

The strict restrictions of media censorship also continue to create problems, which means that the protagonists in this sector have not succeeded in establishing a permanent platform for the genre. There is and hardly ever has been – either before the revolution or now – any support in Syria for non-commercial artistic projects that would give the artists the freedom to produce work independently of market interests.

For this reason, most Syrian comics artists continue to rely on media industry jobs, working for television or for private production firms that produce cartoons for children. The stories that are really close to their hearts – such as those drawn from the daily life of young Syrian people or their hopes and cares – have scarcely had the opportunity to reach their audience.

The Internet could change all that. Since the beginning of the protests in Syria, the Internet has increasingly been developing into a forum for creative artistic dissent and for a long time now, it has been far more than just a means of exchanging information. 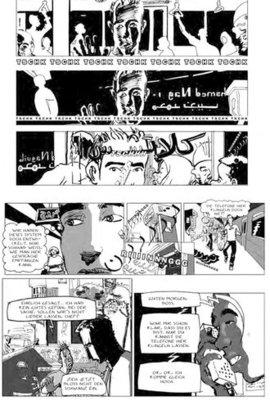 A thorn in the side of the censors: when Magdy El-Shafee's graphic novel 'Metro' was first published, it was banned by the Egyptian authorities; it has recently been published in German by Edition Moderne

​​﻿For the online activists, graphics also have an important role to play alongside video. Moreover, many artists also use the Internet to declare their solidarity with the revolution and to condemn the violence in the country. This "discovery" of the Internet as a platform for the dissemination of artistic works is also giving fresh hope to Syrian comics artists.

The comics artist Salam Al-Hassan, who moved from Syria to Dubai two months ago and whose works were on display at the 15th Erlangen International Comic Salon, sees the increasing role of the Internet as providing new opportunities. "In the past, artists in Syria hardly used the Internet. That is now changing for the better, but we are still in the early stages; things still have to develop," says Al-Hassan.

The artist himself writes a blog where he presents his work and writes with great enthusiasm about the direct contact he believes comics are able to establish between the public and the artist.

Like other artists in the region, the protagonists of the young Arab comic scene have to perform a balancing act. On the one hand, they have to entertain their audience and ensure that their work is also accessible to a broad readership, which is more usually guaranteed by a printed magazine than the Internet. On the other, they want to raise awareness of social and political problems and increase their public's sensibility towards these issues without being overly provocative of censorship, either political or societal.

Artists still face many restrictions. The Arab revolutions have given fresh impetus and new, immediate social relevance to this young art form. However, only time will tell whether in the long term, we will indeed see the hoped-for civil rights and freedoms and greater societal acceptance for which so many people took to the streets, and for which young people in particular have risked so much.

Since Ali Khamenei, Iran's most powerful man, has openly and unconditionally come out in support of Putin's war in Ukraine, logistical help is on its way, with an allegedly ... END_OF_DOCUMENT_TOKEN_TO_BE_REPLACED

The Palestinian militant organisation Hamas, with Hezbollah's help, is building up a military presence in Lebanon, the ultimate consequences of which could be devastating, writes ... END_OF_DOCUMENT_TOKEN_TO_BE_REPLACED

In this essay, renowned Lebanese journalist and writer Hazem Saghieh asks whether the Arab Levant, which stretches from Iraq in the east to Egypt in the west, will remain an ... END_OF_DOCUMENT_TOKEN_TO_BE_REPLACED

Khaled Bahlawan hammers nails into a traditional wooden boat he built by hand, toiling under the scorching sun on Syria's Mediterranean coast to preserve a disappearing ancient ... END_OF_DOCUMENT_TOKEN_TO_BE_REPLACED

"Flugt" is the world's first museum dedicated to the stories of those forced to flee. The new museum, which focuses on the fates of refugees then and now, is housed in a former ... END_OF_DOCUMENT_TOKEN_TO_BE_REPLACED

"Finding Home", the second album by Syrian-born, UK-based musician Maya Youssef, works through feelings of loss and destruction until its music reaches a place beyond war and ... END_OF_DOCUMENT_TOKEN_TO_BE_REPLACED
Author:
Charlotte Bank
Date:
Mail:
Send via mail

END_OF_DOCUMENT_TOKEN_TO_BE_REPLACED
Social media
and networks
Subscribe to our
newsletter