The US administration's policy in Iraq is strengthening Iran regionally at the expense of America's Arab allies, undermining America's own efforts to forge a Middle East peace, and weakening Iraq's nascent democracy, writes Feisal Amin al-Istrabadi 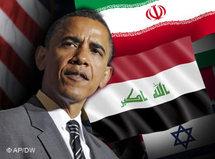 ​​The Obama administration's Iraq policy is in chaos. Seven months after Iraq's national elections, the United States has publicly denied taking sides in the wrangling over who will be prime minister. Privately, however, the US is backing the incumbent, Nouri al-Maliki.

The US has applied tremendous diplomatic pressure on Iraq's Arab neighbours to get them to accept another Maliki term. Most have refused. Initially, the US backed Maliki in order to keep the Sadrist bloc from gaining a share of power. However, that has now backfired, since the Sadrists are the only group other than Maliki's coalition of Shia parties that supports him.

One unsettling consequence of US diplomacy is that it has reinforced Iran's role in Iraq, because Maliki is also Iran's preferred candidate for Prime Minister. Thus, at the very moment that the US is leading a global campaign to isolate Iran over its nuclear program, it is strengthening Iran's regional position.

The US-Iranian dispute is not limited to the nuclear issue. American efforts to re-start Israeli-Palestinian peace talks have faced adamant opposition from Iran, which maintains its 30-year-old policy of opposing any effort to promote peace in the region. Iran exerts significant influence on both state and non-state actors whose support is indispensible to any long-term peace in the Middle East.

Just good friends: The Gulf States, however, regard Iran and Maliki's closeness to it as an existential threat

​​First among these is Syria. Post-election Iraq was an obvious opening for the US to place a wedge between Iran and Syria. While Iran promotes the Shia religious parties in Iraq, Syria's interests there tilt toward secular nationalism, as represented by former prime minister Ayad Allawi's coalition, which actually defeated Maliki in the parliamentary elections held earlier this year. Indeed, Syria has supported Allawi for the past seven years.

Yet, in the wake of intense US and Iranian diplomatic pressure in favour of Maliki, Syria has apparently shifted its support accordingly.

The impact of this American misstep has already been felt, emboldening Iranian President Mahmoud Ahmadinejad on his provocative visit to Lebanon, which included a public appearance on Hezbollah-controlled territory near Israel's northern border.

The Gulf States, especially Saudi Arabia, have so far resisted US pressure to endorse Maliki. They cannot forget that Maliki was in charge during the ethnic cleansing of Baghdad's Sunni Muslims. They regard Iran – and thus Maliki's closeness to it – as an existential threat. Kuwait, Saudi Arabia, and Bahrain, in particular, perceive Iran as inciting unrest among their own substantial Shia populations.

​​Second, Maliki's tenure has been worrying to those who believe in democracy and the peaceable transfer of power. He has created security forces – some of which have reportedly acted as death squads – that are answerable directly to him, thus bypassing the constitutional chain of command. He has also replaced career army and security officers with cronies.

Last March, as rumours circulated that he was losing the vote, Maliki asserted that state security would be threatened if he lost, noting his responsibility to maintain order. When he did lose, he demanded a recount, not as a candidate, but in his capacity as Commander-in-Chief. The fact that Maliki, despite his incumbency, has been unable to secure a second term eight months after the elections attests to the widespread opposition to his continued rule among Iraq's political class.

There is only one way to explain the US administration's decision to exert such diplomatic pressure in favour of Iran's favourite in Iraq: Obama's pledge during his presidential election campaign to disengage from Iraq during his first term. 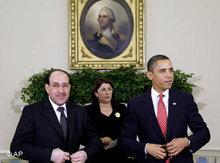 Betting on the wrong horse? By backing Nuri al-Maliki, the US has inadvertently reinforced Iran's role in Iraq

​​In this, Obama is following the example of President George W. Bush, who let the US electoral agenda, rather than American – not to mention Iraqi – national interests, dictate Iraq policy. The Bush administration insisted that Iraq achieve various "milestones" – elections for which the country was not ready and completing a constitution in six weeks, to name two – simply to create the appearance of substantive achievements ahead of the 2004 presidential election or the 2006 mid-term elections.

Similarly, the Obama administration is trying to force what it perceives as the easiest path to a new government in Iraq – even if it is pro-Iranian – not because it is in the US national interest, but to enable it to head for the exits more quickly in advance of the president's re-election campaign.

The administration's policy in Iraq is now strengthening Iran regionally at the expense of America's Arab allies, undermining America's own efforts to forge a Middle East peace, and weakening Iraq's nascent democracy. It is difficult to imagine a worse set of outcomes for US national security interests in this vital region.

Feisal Amin Rasoul al-Istrabadi, Director of the Center for the Study of the Middle East at Indiana University, served as Iraq's Ambassador and Deputy Permanent Representative to the United Nations from 2004-2007, and was principal legal drafter of its 2004 interim constitution.

Wikileaks Disclosures
The Dirty Truth about the War
The publication of over 90,000 secret US military documents by the Internet platform Wikileaks has ignited debate worldwide about the war in Afghanistan. Although the documents reveal hardly any new facts, they alter our perception of modern warfare. A commentary by Britta Petersen

War Crimes in Iraq
Shared Agony of Kurds and Shiites
Under Saddam Hussein, Kurds and Shiities were oppressed, systematically persecuted and murdered in large numbers. Iraq is now attempting to confront these dark chapters its recent history. Details from Baghdad provided by Birgit Svensson

Forming a Government in Iraq
Maliki's Disservice to Democracy
Iraq's incumbent Prime Minister Nuri al-Maliki is doing everything in his power to retain his position as head of government in Baghdad. The actual election victor, former Prime Minister Ayad Allawi, looks on in disbelief at the machinations of his rival. His chances of building a government are dwindling from day to day. In the meantime, terrorists are taking advantage of the power vacuum. Birgit Svensson reports from Baghdad

END_OF_DOCUMENT_TOKEN_TO_BE_REPLACED
Social media
and networks
Subscribe to our
newsletter