According to former Israeli foreign minister Shlomo Ben-Ami, the assumption that peace between Israel and the Palestinians can be achieved by driving a wedge between "moderates" and "extremists" is a fatal misconception

If you want to make peace, you don't talk to your friends. You talk to your enemies. President Barack Obama, however, confines his diplomatic engagement largely to friends rather than adversaries, writes Shlomo Ben Ami

​​ Since its inception in Oslo almost two decades ago, the Israeli-Palestinian peace process has been stymied by the dysfunctional political systems of both sides. Hostage of an impossible coalition and of a settlement movement of free-lance fanatics, Israeli Prime Minister Binyamin Netanyahu's leadership is seriously compromised. His Palestinian counterparts are hardly in a better position.

Today, the clique that surrounds Palestinian President Mahmoud Abbas embodies the bitter deception which the peace process that began with the Oslo agreement has meant for the Palestinians. Moreover, the Palestinian Authority has come neither to represent the majority of Palestinians nor to rule by democratic means.

Abbas' presidential term has expired, and elections are constantly being postponed. The PA prime minister, Salam Fayyad, like his Hamas counterparts in Gaza, rules by decree, keeps parliament inactive, and silences the opposition. With no institutionalized democratic legitimacy, the PA is bound to rely on its security forces and on those of the occupier, Israel, to enforce its will.

Of course, throughout history, national liberation movements have had to marginalize their own radicals and fanatics in order to reach the Promised Land. This was true of Zionism, of the Italian Risorgimento, and most recently of the Catholics in Northern Ireland. But never did the outcast faction actually represent the democratically elected majority. A peace process conceived as a means to weaken and isolate the winners of an election – Hamas – is unlikely to gain much traction.

"It is not impossible that with Hamas in the picture, an agreement could end the occupation, if not the conflict," writes Ben-Ami

​​ Like George W. Bush, President Barack Obama confines his diplomatic engagement largely to friends rather than adversaries. This, more than anything else, explains the growing disconnect between Arab public opinion and the Obama administration.

The assumption – dear to the architects of the current process – that peace can be achieved by driving a wedge between "moderates! and "extremists" is a fatal misconception. The paradox here is double. Not only does one negotiate with the illegitimate "moderates," but it is precisely because of their legitimacy deficit that the moderates are forced to be unyielding on core issues, lest the radicals label them treasonous.

The problem of legitimacy

The Palestinian negotiators' dangerous deficit of legitimacy – and, indeed, the disorientation of the entire Palestinian national movement – is reflected in the return of the PLO to its pre-Arafat days, when it was the tool of Arab regimes instead of an autonomous movement. The green light was given to the current negotiators by the Arab League, not by the elected representatives of the Palestinian people. 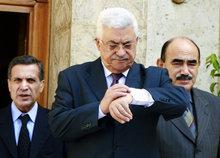 No institutionalized democratic legitimacy. Elected to serve until 9 January 2009, Mahmoud Abbas unilaterally extended his term for another year and continues in office even after that deadline expired

​​ Obama's endorsement of Israeli Prime Minister Binyamin Netanyahu's claim that if Israel is recognized as a Jewish state and its security needs accepted, "I will surprise, and the sky is the limit," has made the current process possible. But maximal security – for example, an insufferably long timetable for withdrawal, unreasonable territorial demands wrapped up as security needs, an Israeli presence in the Jordan valley, and full control of Palestinian airspace and the electromagnetic spectrum – would inevitably clash with Palestinians' view of what sovereignty entails.

For Netanyahu, creation of a Palestinian state means the end of conflict and the finality of claims. By reopening Israel's demand to be recognized as the state of the Jewish people, he is forcing the Palestinians to insist even more on the constituent issues of the conflict, first and foremost on the so-called "right of return" of Palestinians who fled or were driven out after Israeli independence in 1948.

Abbas is too weak and compromised to accept any final settlement with which Netanyahu can live. Arafat set the standard as to what is acceptable and what is not, and Abbas cannot allow himself the luxury of deviating from it. As he admitted in a recent interview with the Palestinian newspaper Al Quds, if pressured to concede on sacred Palestinian principles such as refugees, Jerusalem, and borders, he "would pack his suitcase and go away."

Focus on what is essential

It is not impossible that with Hamas in the picture, an agreement could end the occupation, if not the conflict. In other words, such a process would deal with the issues of 1967 – defining a border (including Jerusalem), withdrawing and dismantling settlements, putting in place security arrangements, and the Palestinians' assumption of full governance responsibility – while shelving for the future those of 1948.

​​Hamas is a far more convenient partner for such a settlement than the PLO. Oddly, Hamas and Israel might have more common ground than Israel and the PLO. Israel wants an end to the conflict but is incapable of paying the price, whereas Hamas can better reconcile its ideology with a peace agreement with Israel if it is not defined as final.

The end of the conflict, like the requirement that Israel be recognized as a Jewish state, is a concept that has unnecessarily acquired mythical meaning. Instead of insisting on what the Palestinians cannot give, Israel should focus on what is essential: the international legitimacy of its borders. United Nations Resolution 181 in 1947 has already recognized Israel as a Jewish state. And, even if Palestinian negotiators agreed to end the conflict once and for all, the chances that all Palestinian factions would abide by such a settlement are nil.

Whatever route is taken, the great question today concerns the enigma that is Bibi Netanyahu, a would-be Churchill who believes that his mission is to thwart the designs of Iran's evil new Shia empire, something which requires the goodwill of the international community, particularly of the Obama administration. It is not entirely far-fetched to assume that Netanyahu finally calculated that if he wants more room to maneuver to deal with Iran, he must participate in the peace process with the Palestinians.

But, in that case, Iranian quiescence, not peaceful relations with an independent Palestine, might be Bibi's true objective.

Shlomo Ben Ami is a former Israeli foreign minister who now serves as the vice-president of the Toledo International Center for Peace. He is the author of Scars of War, Wounds of Peace: The Israeli-Arab Tragedy.

END_OF_DOCUMENT_TOKEN_TO_BE_REPLACED
Social media
and networks
Subscribe to our
newsletter