Conference on Music in the Islamic World
Documenting Diversity

A recent conference brought together music experts from all five continents in the Moroccan town of Assilah. The event defined itself as an initiative to take stock of the diverse musical forms in all the countries of Islamic culture. Manfred Ewel reports 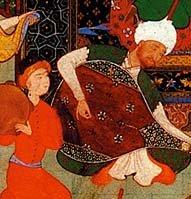 The responsibility of cultural policy for music education is of essential importance for musical development, but this issue was not discussed at the conference

​​The first conference on Arab music was held in Cairo in 1932, attended by music experts and musicians from Europe and the most important Arab countries.

Due to the fundamental changes that the world and the Islamic-influenced countries have been through since then, the subject area was broadened this time around to cover the entire Islamic world and phenomena such as music and the mass media, global trends in music consumption and the influence of state cultural policy.

The event was organised by the Assilah Forum, a Moroccan cultural initiative that has been running a cultural festival with workshops, exhibitions, concerts and a summer school on cultural policy for nearly 30 years, and by the "Maison des Cultures du Monde" in Paris, which has a very good reputation for promoting world music and ethno-musicology.

On closer inspection, music proves to be a central element for cultural identity in Islamic countries, despite its rejection on religious grounds by some conservative Muslims. Music can be heard at every wedding, accompanies farmers' seasonal festivals, and is part of Sufi rituals and private evenings where sophisticated music-lovers meet up.

Nevertheless, the wealth and specific forms of music are often not sufficiently recognised in the countries themselves or internationally. In fact, the great diversity of past and present music in the Islamic world and the omnipresent phenomenon of interchange between local musical traditions and external influences make it an indisputable example of openness and creativity.

For instance, the non-Arab, Islamic-influenced countries of Asia and sub-Saharan Africa have adopted numerous aspects of Arabic music in their own traditions with regard to instruments, musical forms or the role of poetry.

On the East African coast of Kenya and Tanzania, for example, the extremely popular taarab developed from Omani and Egyptian forerunners. Musicians and singers have long been adding African rhythms and new forms of lyrics in Swahili rather than Arabic.

Academic nature of the conference

To document the vitality of music in the Islamic world, various themes and approaches were presented during the six-day conference: studies on the history and unique nature of the respective musical forms of expression, local developments on the Indian subcontinent, in Indonesia or Nigeria for instance.

Other subjects included music forms at risk of extinction, for example in Yemen or Iraq, emphasising that passing on the wealth of a country's music is in the interest of global diversity and the cultural identity of future generations.

Overall, however, the academic nature of the conference meant that many questions concerning contemporary music were not addressed. Apart from one presentation on the history of rai, urban music in Islamic-influenced countries and the global world music scene were only ever mentioned in passing.

Developing the wealth of music

There was no discussion on the adaptation of international trends and their local integration into young people's everyday lives through audiovisual media, music consumption in discos, on fast-circulating CDs or via the Internet or the significance of these phenomena for the multi-dimensional cultural identity of music consumers, beyond a few phrases.

Nor was the responsibility of cultural policy for music education and training musicians, of essential importance for musical development, a central issue.

The outcomes of the conference are to be published on the Internet, and taken further by new conferences every three years. If the possibilities for maintaining and developing the wealth of music in the Islamic world are to be used responsibly in the face of the needs of mainly urban young people, however, the experts still have a long way to go.

END_OF_DOCUMENT_TOKEN_TO_BE_REPLACED
Social media
and networks
Subscribe to our
newsletter