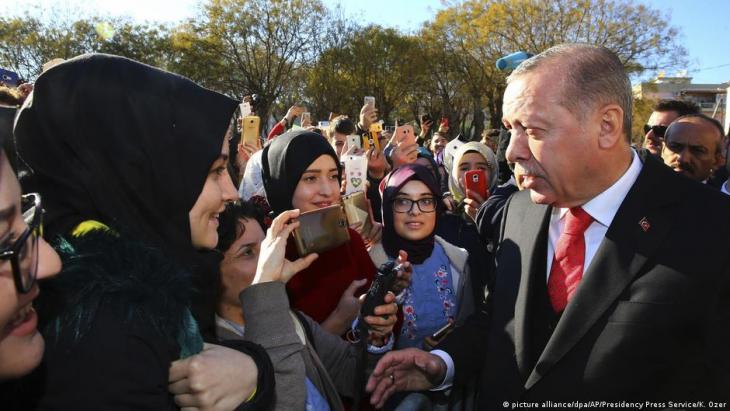 The change in U.S. president is also having an impact on the conflict between Turkey and Greece. Since the USA has started to play the Greek card, the strategic situation in the Eastern Mediterranean has shifted to Turkey's disadvantage. Ronald Meinardus reports from Istanbul

World politics is once again in flux. The renewed impulses – again a repetition – are coming from America. The effects of the transfer of power in the USA are not only evident in transatlantic relations and the West's change in tone towards China and Russia, but also in regional conflicts. Strained Turkish-Greek relations and the dispute in the Eastern Mediterranean serve as apt examples.

"The ice has been broken," said a Greek government spokesman following the summit meeting between Turkish President Recep Tayyip Erdogan and the Greek Prime Minister Kyriakos Mitsotakis. The meeting on the sidelines of the NATO summit on 14 June was the third time the leaders had met since Mitsotakis took office in 2019.

Shortly before the last meeting between the two men in December of that year, Ankara had reached an agreement with the Libyan Unity Government (GNA) under Fayez al-Sarraj on the delimitation of the Exclusive Economic Zones (EEZs) – thus fanning the flames of Turkey's turbulent relations with Greece.

Athens described as "invalid" and "geographically absurd" the "Memorandum of Understanding" (MoU) between Turkey and Libya, which provides for the demarcation of borders across the eastern Mediterranean and ignores the existence of several prominent Greek islands.

Neither the European Union nor the German government recognise the document, which was not ratified in Libya, but nevertheless celebrated as a great foreign policy success in Turkey. In an assessment, the Scientific Service of the German Bundestag states that the MoU "violates customary international maritime law, thereby resulting in an inadmissible treaty to the detriment of third parties".

Ankara's intervention in Libya, with its considerable military component, has been guided to a large extent by the strategic objective of strengthening Turkey's position in the gas dispute in the eastern Mediterranean - in a region, that is, that has become the epicentre of the Turkish-Greek conflict in recent years. While Athens and Ankara have been at loggerheads for decades over various points of contention in the Aegean Sea, the treatment of the respective minorities and, last but not least, the permanent political conflict in Cyprus, the dispute over the maritime zones of sovereignty in the eastern Mediterranean is now top of the agenda. Geographically, it is about the waters between Crete and Cyprus - and the demarcation of the respective economic zones there.

In the summer of 2020, events escalated to within a hair's breadth of a military confrontation between the estranged NATO partners in the disputed maritime areas. The German government's political intervention was the main factor that contributed to calming the situation. The European Union is also closely involved in monitoring the situation. In the meantime, no meeting of the heads of state and government goes by without an urgent reminder to Turkey that Ankara should show restraint in the eastern Mediterranean.

Turkish good behaviour in the dispute with the Greeks – one could also call it keeping quiet – is now a "conditio sine qua non" for the further development of Turkish EU relations and the implementation of the much-cited "positive agenda" presented by Commission President Ursula von der Leyen and Council President Charles Michel during their visit to Ankara. 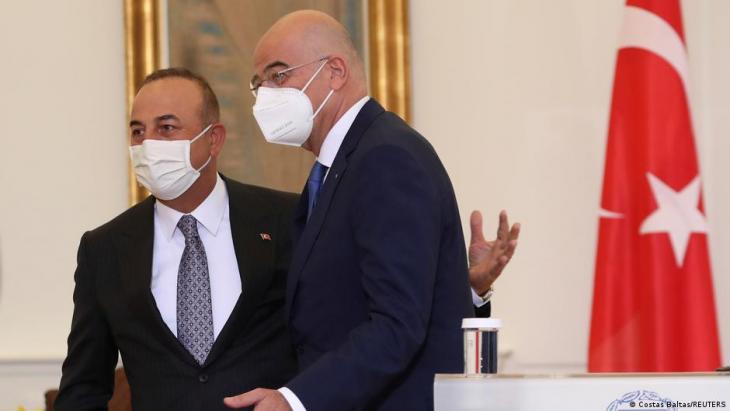 Meeting of Turkish Foreign Minister Cavusoglu (l.) with his Greek counterpart Dendias in Athens in May: in the long-running dispute between the two NATO partners, Greece has the better cards since the transfer of power in the USA. "Athens has managed to build a strong diplomatic front and mobilise important support in the dispute with Ankara," writes Ronald Meinardus. "A new focus of these Turkey-politically motivated manoeuvres is the Arab world, where Athens has lately been closing ranks with the United Arab Emirates, Saudi Arabia, Egypt and Israel"

"We are currently emerging from a phase that had the potential to seriously jeopardise relations," says Mustafa Aydin of Kadir Has University in Istanbul, commenting on the outcome of the Turkish-Greek meeting in Brussels. The most important message coming out of the top-level meeting is that both sides agree that any further escalation of the like which occurred in 2020 should be avoided.

"We are open to a positive agenda at any time," says the Greek head of government, "but in a phased, proportionate and reversible way, providing that the current de-escalation holds, Turkey participates constructively in the dialogue and respects the EU's conditions."

It is striking that in this – and other – statements on the subject, Mitsotakis repeats the relevant formulations verbatim from the final documents of the last EU summit.

From a political and diplomatic point of view, the synchronisation of Greece's view with the EU's policy on Turkey is the most momentous development relating to Turkish-Greek relations in recent years – certainly for Turkey. Athens has succeeded in building a strong diplomatic front and mobilising important support in the dispute with Ankara. A new focus of these Turkey-related, politically motivated manoeuvres is the Arab world, where Athens has recently started to close ranks with the United Arab Emirates (UAE), Saudi Arabia, Egypt and Israel.

From a Greek perspective, the election of Joe Biden can only be described as a stroke of luck. The new American administration's support for the Greek side has been successful, not least thanks to the solid support of a well-positioned Greek-American diaspora in the White House. If the election outcome in America was celebrated in the Greek world, the Turkish side has never made a secret of its preference for Donald Trump. In both domestic and foreign policy, Trump largely let President Erdogan have his way, practicing a policy of equidistance on Turkish-Greek issues.

In turn, it was this restraint that created the space for Ankara's revisionist policies. Under Biden – it is already clear – the Americans are putting their money on Greece. "Greece – not Turkey – is the United States' most important military partner in the Eastern Mediterranean," says former U.S. ambassador to Athens Nicholas Burns, considered a key foreign policy thinker among U.S. Democrats, the president's party.

Washington's demonstrative turn towards the Greeks goes hand-in-hand with a relationship with Turkey that can be described as frosty at best. This turnaround has permanently changed the strategic situation in the eastern Mediterranean. While Athens is feeling a tailwind from Washington, Brussels and important parts of the Arab world, Ankara – all the more so in the West – is suffering from advanced political and diplomatic isolation, which bears all the hallmarks of profound alienation.

In the run-up to the meeting between Biden and Erdogan at the NATO summit on 15 June, the same day as the Turkish-Greek meeting, Cengiz Candar commented that the Turkish president was "at the weakest moment of his almost twenty-year rule".

Last but not least, last summer's near-thing helped catapult the Turkish-Greek disputes to the top of the international agenda. The "internationalisation", especially the "Europeanisation" of bilateral problems, is a thorn in President Erdogan's side. Mindful of his relative strength, he would prefer to deal with the issues in direct – bilateral – exchanges with his Greek counterpart.

On some, more secondary, issues, Athens and Ankara have started negotiations. At the end of May, the governments agreed to hold expert talks on 25 selected topics, such as cross-border transport, tourism and environmental protection. At this level of expertise, results can certainly be expected, even without third party participation. Solutions to the major issues – such as the sovereignty of the Aegean, the economic zones in the eastern Mediterranean or the Cyprus question – are still a long way off, and there is a lack of willingness to make historic compromises on both sides.

"There is a lobby on both sides that wants tension and escalation," says Dimitrios Kairidis, who sits in the Athens parliament for the ruling Nea Dimokratia (ND) and advocates reconciliation between Greeks and Turks. "The best thing we can do is to consign this conflict to the deep freeze".

Abortions are illegal in Egypt unless they are necessary to save a married woman's life. But that doesn't stop local women from having one. Egyptian society needs to acknowledge ... END_OF_DOCUMENT_TOKEN_TO_BE_REPLACED

Food prices doubled, salaries halved, banks restricting withdrawals: Egyptians now have the same problems as the Lebanese. But if things get worse here, the fallout will be far ... END_OF_DOCUMENT_TOKEN_TO_BE_REPLACED

Giessen, Eichsfeld, Kusel, Berlin – cars bearing old German number plates are the latest trend on the streets of Cairo. Many Egyptians regard the discarded plates as chic. What ... END_OF_DOCUMENT_TOKEN_TO_BE_REPLACED

Egyptian Sufis have been on the defensive against the country's Islamists for decades. Meanwhile, interest in mysticism is growing among the young members of Cairo’s middle and ... END_OF_DOCUMENT_TOKEN_TO_BE_REPLACED

Chinese President Xi Jinping's visit to Saudi Arabia in December 2022 may have rattled Washington, but it simply highlighted the Arabs’ desire to diversify their foreign relations ... END_OF_DOCUMENT_TOKEN_TO_BE_REPLACED

END_OF_DOCUMENT_TOKEN_TO_BE_REPLACED
Social media
and networks
Subscribe to our
newsletter