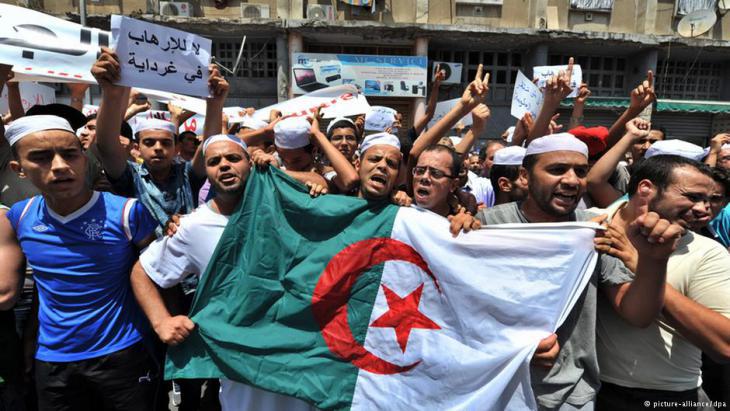 Conflict between Arabs and Berbers in Algeria

Hostilities between Berbers and Arab tribes in eastern Algeria in early July claimed at least 22 lives and left dozens injured. The Algerian Defence Ministry has announced that it is sending troops into the restive province of Ghardaia to put an end to the violence. Andreas Gorzewski takes a closer look at the background to this recent escalation

Plundered and burnt-out shops, houses and public offices as well as 22 dead and dozens injured – this was the preliminary toll after two days of unrest in the Algerian province of Ghardaia in early July. A conflict that had long been simmering between Arabs and Berbers in the region 600 kilometres south of the capital, Algiers, has exploded in a rash of violence and bloodletting.

A Berber representative complained that armed gangs took control of the entrances to the town of Guerara: "The situation is very bad. These are not clashes anymore, this is terrorism." In Algiers, Berbers protested in rage at the escalation of the conflict. President Abdelaziz Bouteflika quickly convened ministers along with army and police commanders for a crisis meeting. Soldiers are now tasked with restoring order.

Arabs and Berbers have lived together peacefully in Algeria for a long time. The two groups differ at least in part in their religion and language. The Berbers make up about 30 per cent of Algeria's population, but in the province of Ghardaia, they have been in the majority for centuries. The Berbers there are adherents of the Ibadi school of Islam, which goes back to the denominational divisions in the early days of the religion. The Arabs, by contrast, are Sunni Muslims.

Only in recent decades have many Arabs migrated to the region, which is regarded as the gateway to the Sahara. As the government pushed for the Arabisation of the population, many Berbers came to feel discriminated against for their language and culture. The first clashes between the two groups occurred in late 2013. Ever since then, there have been regular skirmishes between Berbers and Arabs. However, this is the first time that the death toll has been so high and the damage so severe. Eye-witnesses blame the use of firearms, seen here for the first time. 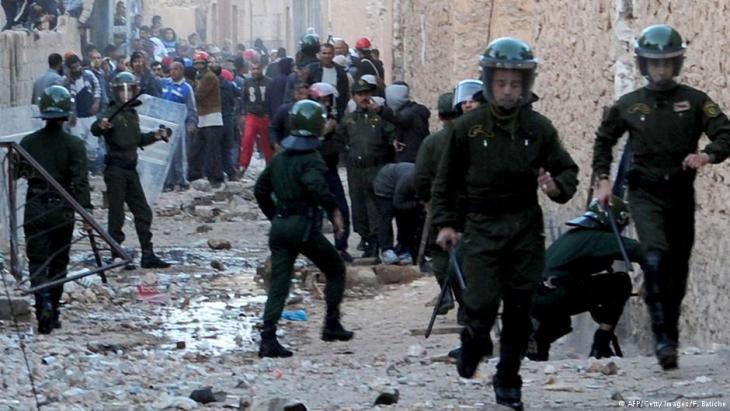 Only a matter of time? Last year, police units deployed tear gas in an attempt to stop the fighting between Berbers and Arabs in the region of Ghardaia. This neither allayed the suspicions between the two Algerian population groups, nor did it resolve their conflicts. In Ghardaia, the largest town in the region, houses, shops, public buildings, cars and palm groves have recently been set on fire. The city with its white houses is a UNESCO World Heritage site

What exactly happened late in the evening of 7 July and early the following morning in Guerara was initially unclear. The Algerian newspaper "Al Chabar" wrote that masked men armed with hunting rifles had opened fire on residents. According to the newspaper "Al Watan", hooded men on motorcycles apparently ordered inhabitants to leave their homes, which were then set on fire. There is no official confirmation of these accounts. In Guerara alone, 16 Berbers and three Arabs were killed, according to a Berber representative. The violence also spread to other towns, where at least three people allegedly lost their lives.

Each group holds the other one responsible for the latent tension, explains Merin Abbass of the Friedrich Ebert Foundation (FES). He manages the foundation's Algeria projects from his Tunisian office. The Arabs contend that the Berbers, who hold key position in local trade, are to blame for Arab poverty. Abbass refers to the Berbers as "Amazighs", the term they themselves use. "The Amazighs say that the government favours the Arabs," Abbass explains. They feel that only Arabs are given posts in the civil service or lucrative contracts. "Both groups feel at a disadvantage," sums up the expert on Algeria.

For Abbass, the latest spate of violence has little to do with religious denomination or ethnicity: "This is definitely a social conflict." Although the media continually emphasises the role of religion, he says, the clashes are actually all about poverty. Although the government in Algiers keeps promising development programmes for the neglected south, "nothing is happening," he says. Beyond solving the material problems, no effort is being made either to build trust between the two communities. 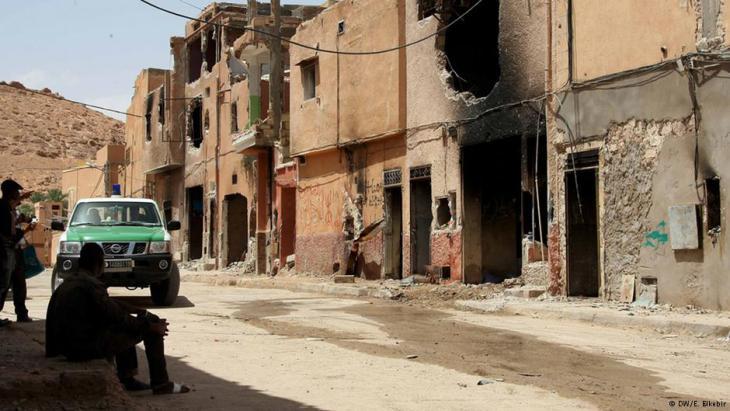 "These are not clashes anymore, this is terrorism" says a representative of the Berber community. Security sources reported that police officers have been dispatched to Ghardaia from Algiers as reinforcements. Centuries of good relations between Arabs and Berbers in Algeria came to an abrupt end in late 2013. Tensions have been fuelled by growing social problems and property disputes as well as the destruction of a historic Berber shrine

No money left for subsidies

Abbass thus finds that the government bears the brunt of responsibility for the tension, as its policies utterly ignore the plight of the region and its people. Empty state coffers presumably play a role here. Up to now, the regime has been trying to appease the dissatisfied citizens with generous subsidies. As long as the price of oil was high, Algiers was able to pursue this strategy. However, now that the oil price has sunk to an all-time low, Algiers hardly has the means anymore to mitigate social tensions, says Abbass.

The Berbers are also pointing the finger at the state. Instead of faulting economic policy, however, the French-language internet portal "Tamazgha", which reflects a Berber point of view, directs its criticism elsewhere. "There can be no doubt of the intention of the Algerian state to eradicate the Berber culture," it says. The incensed Berbers claim that the police and gendarmerie are not intervening to protect them in the conflicts.

The state leadership in Africa's largest country in turn suspects that outside forces are at work. "Official reports say that other groups are behind the clashes and are trying to sow unrest in the country," says Abbass. This is the viewpoint that is also being spread by the media. The Algeria researcher's comment: "It is always easy to blame others."

Home
Print
Newsletter
More on this topic
Ethnic conflict in Algeria: A struggle for power and recognitionInterview with Yasmina Khadra: "The Algerian regime is pulling all the strings"Algeria and the Arab Spring: Opting for the status quo rather than experimentation
Related Topics
Abdelaziz Bouteflika, Berbers | Amazighs, Democracy and civil society, Human rights, Minorities in the Muslim world, Poverty
All Topics

Using a graphic novel to address a contentious issue like the Algerian war of independence may seem an odd choice, but new release "Algeriennes", translated into English by Ivanka ... END_OF_DOCUMENT_TOKEN_TO_BE_REPLACED

Since February 2019, millions of Algerians have been demonstrating against the government. They first took to the streets to demand more democracy and protest the renewed ... END_OF_DOCUMENT_TOKEN_TO_BE_REPLACED

The Algerian state's insufficient response to a recent spate of femicides has driven hundreds of women to defy coronavirus lockdown restrictions to take part in street protests, ... END_OF_DOCUMENT_TOKEN_TO_BE_REPLACED

EU parliamentarian Dietmar Koester criticises the Union's failure to speak up when faced with human rights abuses committed by its Middle Eastern allies, while pointing out that ... END_OF_DOCUMENT_TOKEN_TO_BE_REPLACED

On the 10th anniversary of the Arab Spring we can’t quite escape that substance called remembrance. Yet, eschewing facile modes of nostalgic remembrance and/or tragic lamentation ... END_OF_DOCUMENT_TOKEN_TO_BE_REPLACED

In her third and most recent novel, Paris-based Algerian author Kaouther Adimi writes almost prophetically about a rebellion by a handful of children against the rigid and ... END_OF_DOCUMENT_TOKEN_TO_BE_REPLACED
Author:
Andreas Gorzewski
Date:
Mail:
Send via mail

END_OF_DOCUMENT_TOKEN_TO_BE_REPLACED
Social media
and networks
Subscribe to our
newsletter