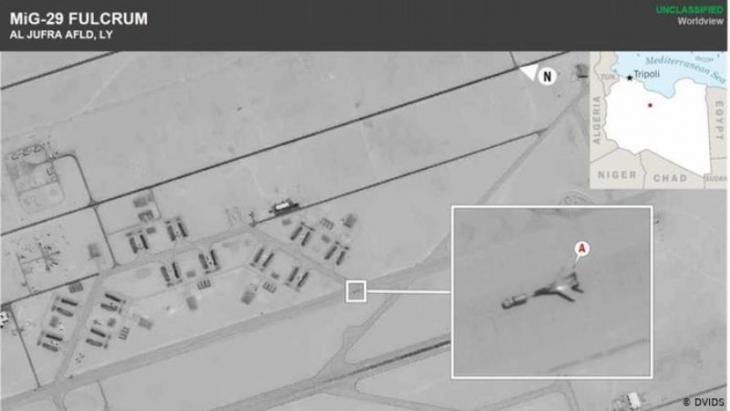 Conflict in North Africa
In Libya, Russia sinks its teeth into another proxy war

The United States has identified over a dozen Russia warplanes in Libya, marking Moscow's first direct venture into the North African country. Experts say it is part of a larger Russian plan to expand its influence in the region. By Lewis Sanders IV and Kersten Knipp

It was the first time Russian armed forces were identified in the North African country. Although the Wagner Group purportedly enjoys Russian state backing, the Kremlin had initially stopped short of deploying official military assets to Libya, despite Moscow's support for general-turned-warlord Khalifa Haftar.

"For too long, Russia has denied the full extent of its involvement in the ongoing Libyan conflict," said U.S. Army General Stephen Townsend, who leads AFRICOM. "We watched as Russia flew fourth-generation jet fighters to Libya – every step of the way."

The U.S. general noted that neither Haftar's Libyan National Army (LNA) nor private military contractors could "arm, operate and sustain these fighters without state support – support they are getting from Russia.

"Russia is clearly trying to tip the scales in its favour in Libya," Townsend said.

The UN said Russia's Wagner group already has up to 1,200 mercenaries in Libya.

Committed to Haftar
Haftar's LNA has sought to oust the UN-backed government Tripoli in favor of a rival Tobruk-based government. He has received support from Egypt, the United Arab Emirates and, at one point, even France. But Russia remains Haftar's most committed ally.
Moscow has sought to expand its influence in the Middle East and North Africa (MENA) region and supported that mission through military escapades. In Syria, Moscow deployed its armed forces to prop up the Assad regime, a move that has ensured its place as a regional stakeholder.
"Strengthening the Russian military position in North Africa will undoubtedly provide Russian President Vladimir Putin with a much tighter grip over Europe and possibly even deep-rooted influence and control in the wider MENA region," said Tomas Olivier, a counter-terrorism expert and former senior officer in the Dutch government.

Algeria‘s regime is again cracking down on anti-fracking activists and the unemployed in the country‘s south. Yet EU countries remain keen to scale up their energy cooperation ... END_OF_DOCUMENT_TOKEN_TO_BE_REPLACED

The murder of a female student at Mansoura University in the Nile Delta has sparked a long overdue debate on femicide in Egypt. Karim El-Gawhary reports from Cairo END_OF_DOCUMENT_TOKEN_TO_BE_REPLACED

Syria, Egypt, Saudi Arabia and the UAE are among those countries increasingly misusing cybercrime legislation to silence dissent and curb freedom of speech. Could a new global ... END_OF_DOCUMENT_TOKEN_TO_BE_REPLACED

Egypt hopes to jump-start the action needed to face a warming world when it takes the presidency of major UN climate talks in November, but warns that countries need a "reality ... END_OF_DOCUMENT_TOKEN_TO_BE_REPLACED

A ceasefire has been in effect in Libya for the past year and a half. Yet after Russia's attack on Ukraine, another proxy war looms in Africa's most oil-rich country. Mirco ... END_OF_DOCUMENT_TOKEN_TO_BE_REPLACED

It is the biggest order in the history of the Siemens Group: a 2,000-kilometre railway network for high-speed trains is to be built in Egypt. But the project raises numerous ... END_OF_DOCUMENT_TOKEN_TO_BE_REPLACED
Author:
Lewis Sanders IV & Kersten Knipp
Date:
Mail:
Send via mail

END_OF_DOCUMENT_TOKEN_TO_BE_REPLACED
Social media
and networks
Subscribe to our
newsletter