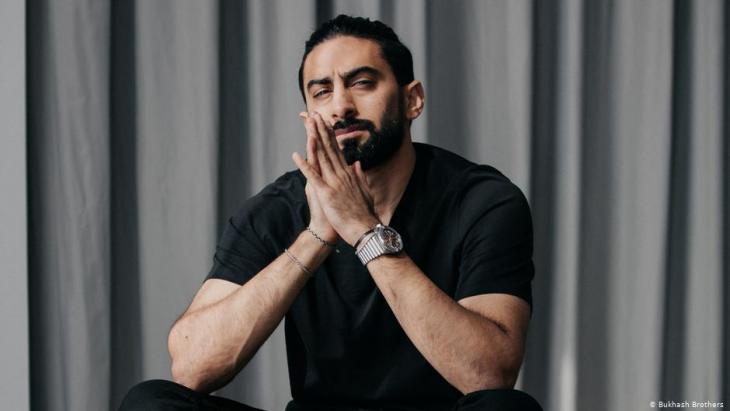 Emirati talk show host Anas Bukhash has struck a chord with his programme "ABtalks" which probes social questions that others fight shy of. In the Gulf, "nobody wants to talk about the elephant" in the room, he says. By Diana Hodali

His questions are raw and direct, but never rude. When he uses the word "interesting", it's not trite, he's curious and engaged. He wants to know what his guests' childhoods were like, what love means to them, what hard times they went through.

But Anas Bukhash's YouTube talk show ABtalks is also about sex, relationships, depression or bullying – topics that are rarely discussed openly in the United Arab Emirates, if at all. "I know I'm doing something good if I'm ruffling some feathers," he says in a Zoom interview. A similar show made in some other countries in the region could land its maker in trouble with the authorities.

Discussing the human side

Now in its third year, Bukhash's show has stepped up production from monthly to weekly instalments, thanks to its growing popularity, attracting some 170,000 subscribers on YouTube and 250,000 on Instagram.

Every Tuesday night Bukhash spends around an hour digging deep into socially critical topics in English and Arabic. In the chair opposite: well-known figures, often from the UAE, but also further afield. "I always wanted to talk to achievers, celebrities, influencers, athletes, because a lot of people are curious about them. People see one side of their lives, but they don't see beyond. I wanted to show what makes them vulnerable, makes them human."

What his guests do professionally is never the focus. Is he concerned with authentic content in a world of appearance and reality? "Yes, authentic is a good word for it," he says.

Sometimes several guests are invited on to discuss a particular topic: masculinity or marriage, for example. "A social topic is more powerful … when people no longer accept something socially, politics has to follow." But an explicitly political talk show doesn't interest him, he says.

Although viewers are invited to share in the deepest thoughts of his guests and Bukhash himself is widely-recognised both in and beyond the UAE's borders, not much is known about him.

In his live sessions on Instagram or TikTok, he regularly answers questions about his age and marital status: 39, two sons, divorced. However, Bukhash has also become picky about whom he talks to, he says, not only in granting interviews to journalists, but also in how he selects his guests.

In the past he was told he came across as cool or reserved. "My mother said that having kids made me softer," he says. His mother, Hala Kazim, comes up several times. Kazim is also well known in Dubai after making a name for herself as an artist and TV presenter, and is now involved in social entrepreneurship. "I trust her opinions, she has a big influence on my life," he says.

Born in Dubai, Bukhash is the eldest of five sons. At 18 he went to Boston to study engineering. When he returned at the age of 22-23, his parents had divorced. He started a job in an oil company and opened an indoor soccer hall called "Ahdaaf" – "goals" in Arabic. And that was just one goal of many.

Alongside his love for fashion and music – a picture of rapper Tupac Shakur hangs in his apartment – Bukhash has also had a career as a successful semi-professional footballer and brands still approach him for sponsorship and endorsements.

Since 2014 he has been running the PR and online marketing company Bukhash Brothers, a fashion label called "I am Buka" and a hairdressing salon called "Chalk" – together with his younger brother Harith Bukhash. Juggling those and the talk show demands good time-management and organisation, he says. 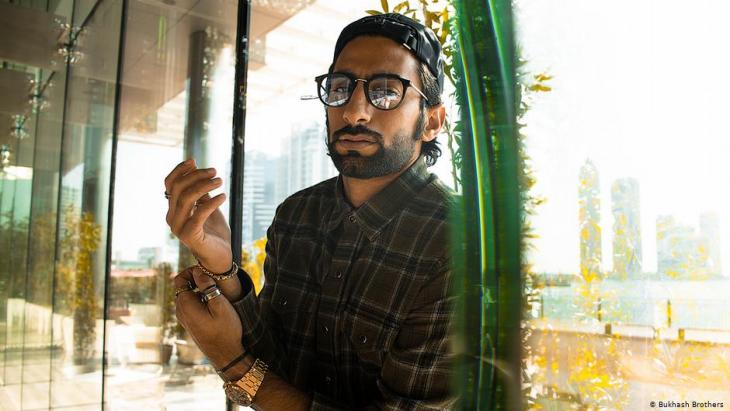 Anas Bukhash digs into socially critical topics in English and Arabic: "I always wanted to talk to achievers, celebrities, influencers, athletes, because a lot of people are curious about them. People see one side of their lives, but they don't see beyond. I wanted to show what makes them vulnerable, makes them human"

But money has never driven him: "It has been a by-product, a nice by-product. If it was the driver, I would have quit on so many projects or not even started them."

He'd rather be his own boss, he says.

Pushback from the older generations

With all that on his plate, why take on a YouTube talk show? A show hosted by a television network would mean he wouldn't have a full say in choosing his guests, or the freedom to ask the questions he thinks are important. YouTube allows him to broach taboo subjects that mainstream TV can't.

That has also meant dealing with pushback, but he knew what he was getting into when he moved into working on social media, he says.

"My society is also a shy society, which means they won't confront you and tell you, 'by the way, I didn't like what you said,'" Bukhash says. "We Arabs, and people from the [Gulf] region are brought up to have many elephants in the room, but nobody talks about the elephant, it's just sitting there. So that's what I'm also trying to break."

"Perhaps the younger generation likes me a bit more, because I became a modern kind of Emirati to them. But maybe the older generation, the ones that are too conservative or too traditional, will say 'he is destroying our traditions.'" Bukhash says he also has to deal with stereotypes and prejudices about people from the Gulf.

He also recognises his privilege. Would a female host be able to ask the same questions as him? "Conservatives and traditional people will maybe not accept such bluntness from a woman. But a man can get away with a lot of things around the world," he says.

Despite a distance of almost 5,000 kilometres between Germany and Dubai, Bukhash comes across as thoughtful, open-minded and authentic, giving a socially-distant Zoom conversation the feeling of sharing the same room as him.

"If the interview had taken place in Dubai, we would have met for tea on the beach in Jumeirah in the evening," he says. That's where he winds down and gets involved in long conversations.

The words 'love' and 'miss you' are easily thrown around without sincerity, diluting their meaning, he says. His greatest passion: "I want to be regarded as one of the best interviewers."

Home
Print
Newsletter
More on this topic
Sex tourism in Egypt: A bride for the summerIslam and psychoanalysis: A tale of mutual ignoranceShereen El Feki's ''Sex and the Citadel'': Exploring a sexual minefieldWomen's liberation in the Gulf: Arab women – fighting for their rights for 60 years
Related Topics
Criticism of Islam, Feminism in Islam, Forced marriage, Free speech and censorship, Islamic lifestyle, Media in the Arab World, Muslim women, New media in the Muslim world, Sexuality and eroticism in Islam, Women in the Islamic world, Youth culture
All Topics

Although Saudi Arabia seeks to diversify its energy sector and economy away from fossil fuels, the OPEC leader is eager to maintain its status as a fuel exporter giant by ... END_OF_DOCUMENT_TOKEN_TO_BE_REPLACED

Saudi Arabia and its allies have agreed to set aside their differences with Qatar at a summit meeting of the Gulf Cooperation Council. The restoration of diplomatic relations ... END_OF_DOCUMENT_TOKEN_TO_BE_REPLACED

Report from a disintegrating world: the early Islamic buildings of Sanaa are suffering from the effects of climate change and war. This world heritage site could be lost forever. ... END_OF_DOCUMENT_TOKEN_TO_BE_REPLACED

Ten years after the start of the Arabellion in North Africa and the Middle East, many view the movement as a failure. But rather than being over, it has now entered a more mature ... END_OF_DOCUMENT_TOKEN_TO_BE_REPLACED

END_OF_DOCUMENT_TOKEN_TO_BE_REPLACED
Social media
and networks
Subscribe to our
newsletter