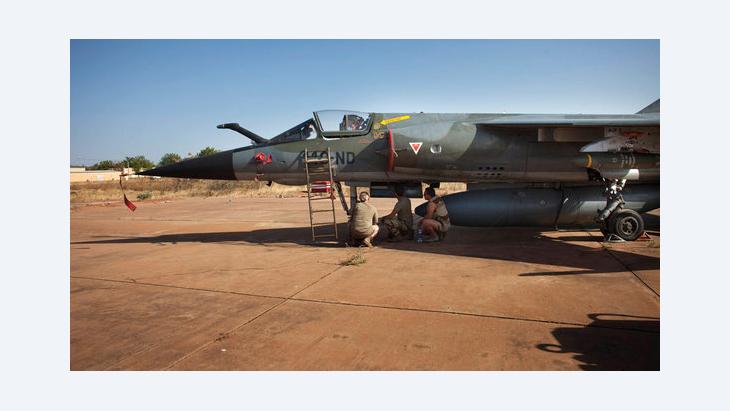 Consequences of the Military Intervention in Mali
A Tinderbox Situation

﻿Algeria and Morocco granted France permission to use their airspace in its campaign against militant Islamists in Mali. But Arab experts fear that the Mali intervention could push many young Muslims into the arms of the Jihadists. By Siham Ouchtou

Even as the French military continued its attacks on radical Islamists in northern Mali, a decision by Algeria and Morocco to allow France the use of their airspace in order to conduct its campaign was a source of controversy. There were reasons to fear that the whole of North Africa could become an extremist stronghold, particularly in view of the tragic hostage-taking in Algeria.

There is also the question of how far the French military strike will impact on the interests of Algeria and Morocco, as well as on bilateral relations between the two nations. The borders of both countries remain closed. Observers say that their support of France's military action in Mali is attributable to the danger to the internal security of both countries posed by terrorist groups operating in the region.

While on the one hand there are loud voices warning against the potentially disastrous consequences of this move – including the possibility that extremist activities may spill over from northern Mali into the border regions of Morocco and Algeria – others expect that this crisis will led to a rapprochement between Algiers and Rabat over the Western Sahara conflict, which has always caused bilateral tensions. 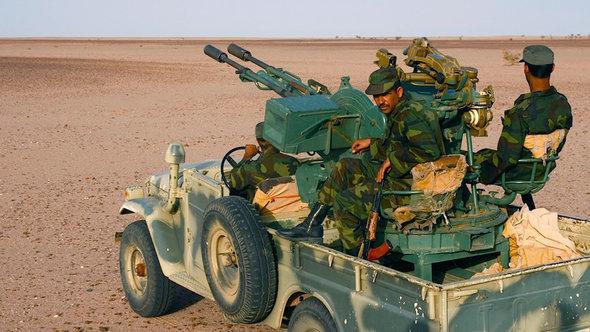 Forgotten and unresolved conflict: Since 1991, the UN has been monitoring a ceasefire agreed between Morocco and the Polisario movement sponsored by Algeria

​​Algeria continues to support the Polisario Front in its battle for the Western Sahara, territory claimed by Morocco. Some years ago, Rabat proposed an autonomy plan for the disputed region.

Directly after Algeria announced it would allow French fighter jets to fly over its territory in order to carry out raids on Islamist-held regions in Mali, commentators in Algeria began to wonder what the possible impact of such a move might be on the interests of Morocco, which currently finds itself at odds with its eastern neighbour over the Sahara conflict – a conflict in which it can count France as one of its key allies.

Morocco was however quick to officially announce, through its Interior Minister Mohand Laenser, that it supported Algeria "unreservedly". The French Foreign Minister then declared that Morocco had also granted its European ally use of its airspace for the same purposes – a move that was not confirmed by Rabat.

Speaking to Qantara.de, French terrorism expert Mathieu Guidère said the decision by Morocco and Algeria is essentially attributable to the two nations' historically close relationship with France. In addition, he said, France also exerted diplomatic pressure on both countries to grant Paris use of their air space. And finally, said Guidère, it is in the interests of both Morocco and Algeria to deal with the menacing "terrorist" threat emanating from Mali.

Mohammed Benhammou, Chairman of the "Fédération Africaine des Etudes Stratégiques" in Rabat believes the French intervention took place with the backing of the international community and on Mali's request. Morocco, he says, has always supported the unity and sovereignty of Mali. 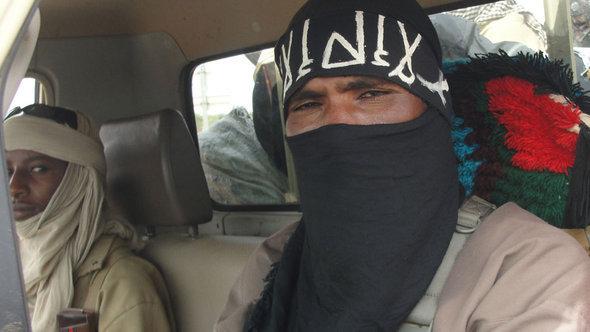 New boost for Jihadists in the Maghreb states? Ansar Dine has been linked with the terrorist network Al Qaeda in the Islamic Maghreb (AQMI). Experts fear an expansion of armed Islamist activity since the Islamist takeover of northern Mali and the hostage drama of In Amenas in southern Algeria

​​In an interview with Qantara.de, the Moroccan expert elucidates: "Consequently, Morocco's decision to open its air space to France – should this actually be confirmed – can be viewed against a backdrop of the current need for cooperation as well as the worsening security situation afflicting the African Sahel region."

Considering the about-turn in the position of Algeria, which has up to this point rejected any interference in the domestic issues of another country, but which then agreed to support France in its military campaign on Malian territory, Benhammou has this to say:

"I think the most recent visit to Algeria by French President François Hollande had a considerable influence on Algeria's decision. Meetings also took place between Algerian leaders and western decision-makers. All this clearly persuaded Algeria to adopt a position of positive neutrality, or in other words no direct interference, but support for the French intervention."

A direct response to the Algerian move was the hostage-taking in the vicinity of In Amenas, which cost Algeria dear and resulted in heightened security measures along its southern borders. 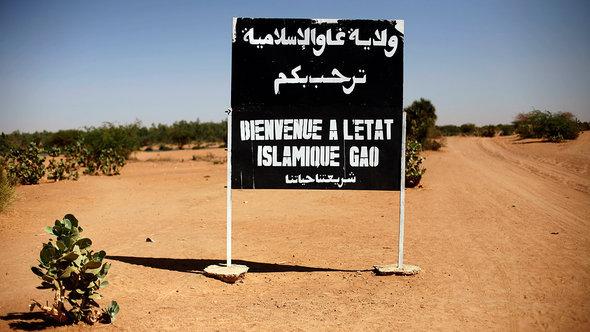 "Welcome to the Islamic state of Gao!" After Islamist groups and Tuareg rebels declared the independent state of Azawad in northern Mali in April 2012, they made Gao their capital. An ensuing power struggle between the groups was eventually won by the Islamists in Gao

​​Dr. Ammar Jaffal, a lab director for studies and research into the subject of international relations at the University of Algiers, commented: "Even though Algeria isn't directly involved in the military operation, it comes with a high price tag as far as its security is concerned. It means spending more on defence and on measures to protect oil production facilities in the south, as well as the deployment of more security personnel."

The Algerian expert continues: "Even without hostage-takings and terror threats, this matter is proving to be very costly for Algeria."

The people of Algeria disapprove of their country's official position, and reject it. Newspapers are ruthlessly critical of the Algerian leadership, especially in view of the fact that previously, Algiers had always committed itself to clear neutrality in this question.

For Jaffal, this criticism is mainly driven by the fact that this is about France, Algeria's former colonial power. However, he says there is also another, similarly broad-based discourse taking place in Algeria that justifies the government's actions and refers to the dangerous situation in the nation's southern border region.

In Morocco, on the other hand, the public has been insufficiently informed as to the decision of the government in Rabat. This prompted one of the opposition parties to express its criticism of the apparent withholding of concrete information about what is happening in Mali.

French analyst Guidère also says the true challenge facing Morocco and Algeria following their decision is not the threat posed by armed groups such as the one that conducted the hostage-taking in Algeria. A much greater danger is posed by public hostility to the decision to support France, as this could drive young people in both nations into the arms of those groups.

The Tuareg and the Sahara conflict

Moroccan analyst Benhammou shares this view, and believes that this war is "not a traditional or symmetrical war", but one that represents a threat to the entire region. Extremists could use it as a pretext to recruit more fighters and carry out terror attacks in neighbouring states, like the one that has just happened in Algeria. 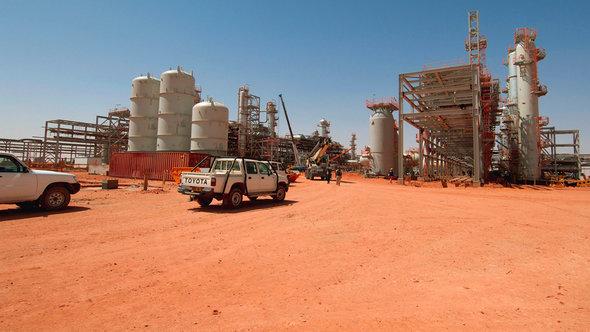 Cross-border terrorism: The 32 initiators of the hostage drama at the natural gas facility at In Amenas, Algeria, came directly from neighbouring Mali. At least 67 people were killed in the attack, which came in response to Algeria's decision to provide France with military support in its campaign against Islamist groups in northern Mali

​​Meanwhile, Algerian expert Jaffal expects the confrontation between French troops and armed movements to be a protracted one that "will mutate from a direct confrontation into a guerrilla war. The effects of this are already being felt, even though the In Amenas attack was highly specific and foolhardy, and on a scale that no one had expected."

French expert Guidère is convinced that what is happening in Mali will have an impact on the Western Sahara conflict. "This issue continues to be a delicate one, but we've now seen some movement in the Sahrawi position: Initially, when the northern part of Mali – known as Azawad – declared its independence, they still hoped to be able to achieve the same, particularly as the international community appeared to be biding its time. But these latest developments have for the moment nixed their independence ambitions."

Guidère adds that owing to a similar standpoint and similar goals, there has been a noticeable rapprochement and closer cooperation between the Sahrawis and the Tuareg. France on the other hand rejects the establishment of a Western Sahara Republic, just as it is against the declaration of a Tuareg state. This puts Algerian in a difficult position, says Guidère.

In this context, he explains: "I don't believe that this will lead to an opening of the border between the two nations, but at least to an agreement that declares the establishment of any new states in the Sahel region to be not worthy of support."

It is possible that Algeria will withdraw its support for the Sahrawis in the Moroccan Western Sahara, as soon as it feels threatened by the Tuareg, says Guidère, adding: "If these groups should ever be completely driven out of Mali, then the Sahara is the first place they will seek refuge. In such a case, Algeria will be confronted with the same situation as in Mali, or perhaps worse." Ammar Jaffal disagrees, and says: "I think the Sahara issue is already old and has nothing to do with what's happening right now. It's an issue being negotiated within the United Nations framework, its conflict parties are known. In Mali, however, we're dealing with a request from the government for foreign intervention."

The Algerian expert continues: "To date, it has not been verified that the Sahrawis have joined forces with the Tuareg in northern Mali. My view is that the latter group have for some time now been in cahoots with Al Qaeda and rebel movements in the South."

The catastrophic human rights situation in Bahrain is being largely ignored by the rest of the world. Despite all the damning evidence, which includes a Human Rights Watch report ... END_OF_DOCUMENT_TOKEN_TO_BE_REPLACED

The many terrorist attacks France has faced over the last ten years have poisoned the political discourse, especially when it comes to migration. Since 2012 a relentless stream of ... END_OF_DOCUMENT_TOKEN_TO_BE_REPLACED

Etel Adnan, the artist who transcended the borders of culture and language, may have died in Paris, writes Lebanese author Elias Khoury, yet her death holds a mirror up to the ... END_OF_DOCUMENT_TOKEN_TO_BE_REPLACED

Shot, beaten to death or drowned: a demonstration by tens of thousands of Algerians ended in the "Paris Massacre" on 17 October 1961. Sixty years on, historians and victims' ... END_OF_DOCUMENT_TOKEN_TO_BE_REPLACED

Western states have fought against terrorism not only in Afghanistan, but also in Syria and Iraq – leaving behind people who were once their partners in fear and poverty. Hisham A ... END_OF_DOCUMENT_TOKEN_TO_BE_REPLACED

Newly discovered aerial photographs taken by the German Luftwaffe show what a keen interest the Germans took in British-controlled Palestine during the Second World War. Not only ... END_OF_DOCUMENT_TOKEN_TO_BE_REPLACED
Author:
Siham Ouchtou
Date:
Mail:
Send via mail

END_OF_DOCUMENT_TOKEN_TO_BE_REPLACED
Social media
and networks
Subscribe to our
newsletter