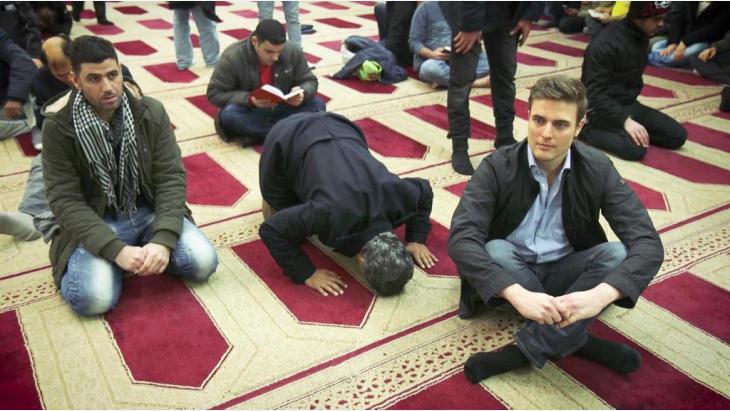 Constantin Schreiber, a German television journalist, conducted research on sermons given in Muslim houses of prayer and used it to produce a book and some TV reports. Now he has come under fire. Schreiber is accused of employing underhand methods and taking a biased approach to his subject. Is there anything in the criticism? Canan Topcu has the answers

Constantin Schreiber became known to the wider public through "Merhaba", an Arabic-language TV programme aimed at refugees in which he explained what makes Germany tick. The series won him a lot of praise and a journalism prize. Now Schreiber has published a book entitled "Inside Islam". His TV series "Moscheereport" (Mosque Report) came out of the same research. Both have brought renewed attention for the journalist, but this time he is being heavily criticised.

Schreiber′s book introduces readers to 13 mosques in Berlin, Hamburg, Leipzig, Magdeburg, Potsdam and Karlsruhe and examines a sermon given during Friday prayers at each. Having had the sermons translated from the original Turkish or Arabic, he "decodes" each of them with the help of the Islamic studies scholar Abdelhakim Orghi and various other experts. His conclusion is that these sermons certainly pack a punch! "Central messages included delimiting and preserving a Muslim identity and the call for Muslims to shield themselves from the influences of Germany." As Schreiber summarises at the end of the book, a warning against life in Germany was a common theme in many of the sermons.

The mosques in which he conducted his research were selected "at random", Schreiber explains. This sounds implausible to anyone familiar with the principle on which many publishing houses work these days. The most important ingredients are: a spectacular theory and a snappy, sensational title. The work – that is, bringing together the material for a book – only begins once publisher and author have come to an agreement. Anything that doesn′t conform to the theory is left out or made to fit.

According to Schreiber, little is known about mosques and "very few Germans" have ever set foot in "one of our country′s many mosques". The journalist thereby gives the impression of having set out into a terrain where so far no-one has dared to tread. A more thorough survey of the extant literature would have put him right on this point: he might have discovered that plenty of other journalists and experts, such as Professor Rauf Ceylan, had already taken a critical look at imams and mosques. 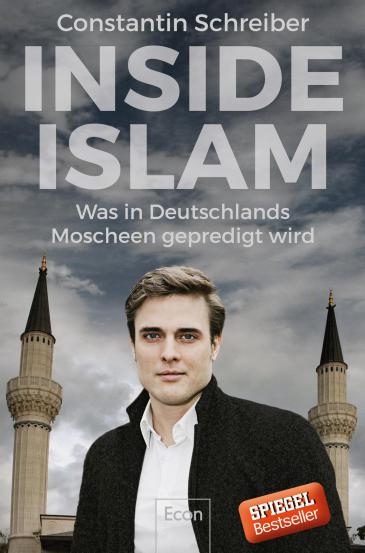 If the cap fits: reading Schreiber′s book and looking at the criticism of how he went about his research leaves you with the sneaking suspicion that the journalist used dishonest methods, and certainly didn′t conduct his research without prejudice – that his aim was in fact to uphold the theory of anti-integration sermons

Over the book′s roughly 250 pages, many passages contain a subtext: that there is something fishy going on in the mosques′ communities. This probably has something to do with the fact that Schreiber – as he himself tells us – is unfamiliar with mosques. Which is surprising, given that he spent many years as a journalist living in Muslim countries.

More is required than simple curiosity

"My methods are to question, observe and analyse," he explains in the book. But these methods alone are not enough. The processes and peculiarities of mosques are not self-explanatory. Understanding what you will see and hear in an Islamic house of prayer requires more than simple curiosity. Without the relevant prior knowledge, entering a mosque is not going to lead to the kind of enlightenment Schreiber claims to be seeking. Especially when the visit is conducted in a spirit of mistrust.  This mistrust shines through the text again and again – as, for example, when he wonders why there are so many young people in the mosque for midday prayers and whether that means they are skipping school. He could have asked them – but he didn′t.

Reading Schreiber′s book and looking at the criticism of how he went about his research leaves you with a sneaking suspicion that not only did the journalist use dishonest methods, he also failed to conduct his research without prejudice – in fact, his aim was to uphold the theory of anti-integration sermons.  He cannot have been aiming for a balanced picture, or he would have stumbled "at random" across mosque communities where imams have a thorough command of the German language and give sermons that have a true bearing on the realities of life for Muslims in this country.

But the criticism Schreiber has earned hasn′t just been for concentrating on problematic sermons; people have also condemned the fact that inaccurate translations of sermons have led him to interpret them as anti-democratic and misanthropic. Johanna Pink, who teaches Islamic studies in the Oriental department at the University of Freiburg, was moved to send an open letter to the producers at ARD about Schreiber′s book and TV reports. In her letter, Professor Pink calls on the station not to stir up further antagonism, but to resist this through nuanced, objective and carefully-researched reporting. "In view of the current debates over Islam, we need more objectivity and less sensationalism," she explains.

Focusing solely on critical sermons and leaving out the shades of grey is not especially helpful. On the contrary, it will encourage those mosque communities that have thus far been open to dialogue and maintained communications to start closing themselves off, even though they have nothing to hide.

Another criticism relates to Schreiber′s claim that he received no support from Islamic studies scholars. Both in the book and in newspaper articles, he says he wrote to several asking for their expertise, but received no replies. He interprets this as a lack of interest in a scholarly classification and contextualisation of the content of those sermons he has "put under the microscope". "Numerous experts have avoided me following my enquiries, consistently leaving phone calls and emails unanswered. Is it too much work to examine these texts, some of which are quite long? Is it too sensitive, too delicate a matter?" he asks in the book. 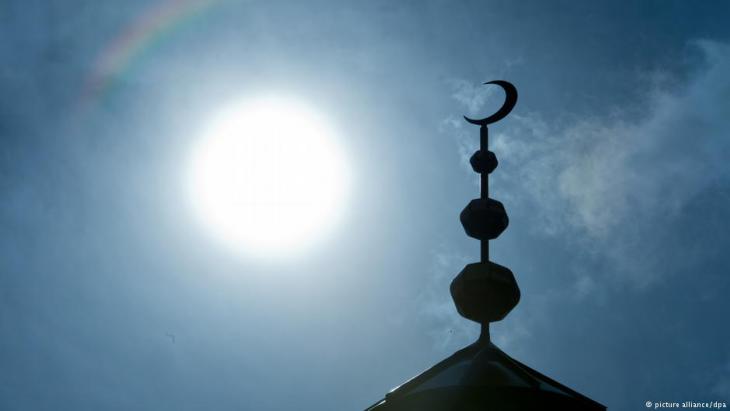 Fuel to the fire: "focusing solely on critical sermons and leaving out the shades of grey is not especially helpful. On the contrary, it will encourage those mosque communities that have thus far been open to dialogue and maintained communications to start closing themselves off, even though they have nothing to hide," criticises Canan Topcu

Several of the Islamic studies scholars to whom he made enquiries have since spoken out in public. One of them reports having told Schreiber he was prepared to co-operate, to then subsequently hear nothing more from him; some, like the academic Riem Spielhaus, who has carried out and published research on mosques in Berlin, were not contacted at all. And others say they turned down Schreiber′s request for a variety of reasons: one said they did not judge themselves competent to interpret Arabic sermons taken out of context; another that this was a very complex task for which they did not have time, though they told Schreiber they could put him in touch with competent people who would do the work for a fee.

The Islamic studies scholar Verena Klemm is one of the experts whom the journalist called on for support. He sent her some of the sermons via email. Schreiber quotes her replies at several points in the book – in one passage adding the following words to one of her statements: "Christmas is seen as dangerous because it is culturally different. It goes against Islamic culture and religious identity. Muslims and Christians should be culturally divided." Even if a warning about Christmas was problematic, says the professor, who teaches at the Oriental Studies Institute at the University of Leipzig, the point is that these are statements she neither made nor authorised. In the introduction to the book (p.40) Schreiber quotes anonymously from Klemm′s email, in which she warns him of the dangers of translation errors, which Schreiber interprets as an attempt to put him off writing the book.

"Inside Islam" probably won′t be bought by too many "men on the street" – but if it should be, it′s unlikely that more than a few will read the book from beginning to end. But that is not the issue here. The news coverage of the book alone – the uncritical repetition of Schreiber′s theory – strengthens existing prejudices against Muslims and their religion.

The media only has to mention "Inside Islam" and the head of the "Alternative fur Deutschland" party Frauke Petry and other right-wing populists wade in, feeling that Schreiber′s "investigative research" confirms their belief that Islam has no place in Germany. You don′t have to be an expert on Islam, Schreiber′s defenders say, to reveal that anti-constitutional sermons are being given in mosques, discouraging integration and taking up misanthropic positions. They don′t accept the objection that the sermons cannot be translated and interpreted just like that, and that these things require some knowledge of the theological content and context. The entirely justified objection here is that very few attendees at prayer services have a good grasp of theology, to be able to understand the sermons in context.

It would therefore have been interesting if Schreiber had talked more to the people who had heard the sermons and listened to what messages they took from the imams′ words. But this aspect is absent from the book. Perhaps he intends to focus on it in the next one.

Germany’s electorate includes some 7.4 million citizens with international roots, while many more millions of residents from abroad aren’t allowed to vote. Both groups are often ... END_OF_DOCUMENT_TOKEN_TO_BE_REPLACED

No other Western poet was arguably so well-versed in the Koran or so fascinated by Islam as Germany's national hero, Goethe. In a new publication that examines all Goethe's ... END_OF_DOCUMENT_TOKEN_TO_BE_REPLACED

Migrants are often maligned as being responsible for Europe's problems. Yet their integration is in Europe's interest. Michael Thaidigsmann believes that a long-term vision is ... END_OF_DOCUMENT_TOKEN_TO_BE_REPLACED

How could the Afghan government and its institutions collapse so quickly? That things were going wrong in Afghanistan had been obvious for a long time, yet the West preferred to ... END_OF_DOCUMENT_TOKEN_TO_BE_REPLACED

Shida Bazyar's new novel is the literary surprise of the year. It tackles the pressing issues of our time, and yet it is timeless. This is a story of friendship, marginalisation ... END_OF_DOCUMENT_TOKEN_TO_BE_REPLACED

The swift fall of Kabul recalls the ignominious fall of Saigon in 1975. Beyond the local consequences – widespread reprisals, harsh repression of women and girls, and massive ... END_OF_DOCUMENT_TOKEN_TO_BE_REPLACED
Author:
Canan Topçu
Date:
Mail:
Send via mail

END_OF_DOCUMENT_TOKEN_TO_BE_REPLACED
Social media
and networks
Subscribe to our
newsletter