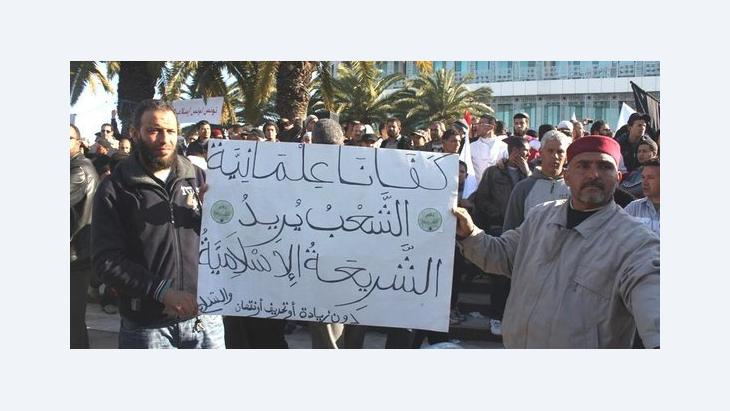 Conflict is raging in several Arab Spring nations over the drafting of new constitutions and the importance of Sharia within basic law. Annett Hellwig discussed the issues at stake with Tunisian legal scholar Imen Gallala-Arndt from the Max Planck Institute for Comparative and International Private Law in Hamburg

The moderate Islamist party Ennahda emerged clear victors in elections to the Constituent Assembly in Tunisia last year. What's your assessment of their policies to date?

Imen Gallala-Arndt: Initially, Ennahda's statements were the source of great confusion, because some of them were threatening in tone and party leaders were saying things that contradicted statements issued by other members. This was deeply unsettling for the people of Tunisia as well as other political figures. For example Sadok Chourou, one of the hardliners within the Ennahda movement in the constituent assembly, criticised individuals who had demonstrated against the government, and underpinned his attack with a verse from the fifth Surah of the Koran. He described the demonstrators as godless, and said they were destined for hell.

It is of course unnerving when religious arguments are used to describe political opponents as infidels. People are also unsettled by Prime Minister Hamadi al-Jabali's talk of the "Sixth Caliphate" because it's not clear what social goals he's pursuing with this. 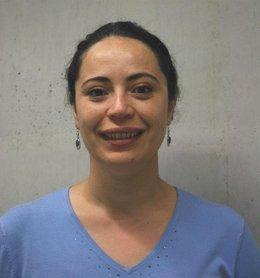 Dr. Imen Gallala-Arndt: "The Islamists can be democratic. But there is a danger that once they are in power, they could move to restrict human rights or women's rights in particular"

​​Ennahda also initially insisted that Sharia must be the source of legislation, although it later revised this statement. But these are exactly the kind of views that unsettle the population and mean that it's difficult to gauge what the party stands for. It does of course represent certain principles, but now that it has assumed governmental responsibility, it must learn to be pragmatic. Ennahda still lacks a clear line in this respect.

Western discourse often views Sharia as incompatible with constitutional principles. What about the compatibility of Sharia and human rights in Arab nations currently undergoing upheaval?

Gallala-Arndt: One must bear in mind that Sharia was developed over the course of history by legal scholars in consideration of local social and economic conditions at the time in question. There's a difference between that which is viewed as a principle and as an eternal truth in Islamic law, and the sections of the Sharia code that are currently undergoing reappraisal. Polygamy was abolished in Tunisia in 1956, but at the time no one claimed that this represented a break with Sharia. Quite on the contrary: Lawmakers invoked the principles of Islamic law with the intention of acting in the interests of progress.

Whenever Islamists enter government, it's not always an immediate indication that they are going to be against women's rights or human rights in general – it's always dependent on the political will of whoever happens to be in power. They can base their approach on Sharia law but at the same time be progressive through a dynamic interpretation of Islamic legal sources and authorise reforms within the framework of Sharia.

But of course it all depends on who's carrying out these interpretations, doesn't it?

Gallala-Arndt: Absolutely. That's exactly where the danger lies. And that's certainly also the reason why people are scared of it. There is no certified security for minorities, women and the weaker members of society. These are more or less dependent on the good will of legal scholars. If the scholars are well disposed to these individuals, then the group concerned will fare well, but if they are not, the disadvantaged have no legal means at their disposal to do take action. There is a lack of objectivity, practicality and security for the citizen. He must be able to rely on his rights being guaranteed and respected.

Can you give me a concrete example of this?

Gallala-Arndt: One example is the jurisdiction of the Supreme Constitutional Court in Cairo. In its administration of justice, this court makes a distinction between fixed principles that are unalterable, and others that are flexible – according to time and place. Laws governing the distribution of an estate, for example, which in accordance with Qur'anic sources stipulate that a woman gets only half as much as a man, are not questioned in this case. So this is viewed as an unalterable principle. 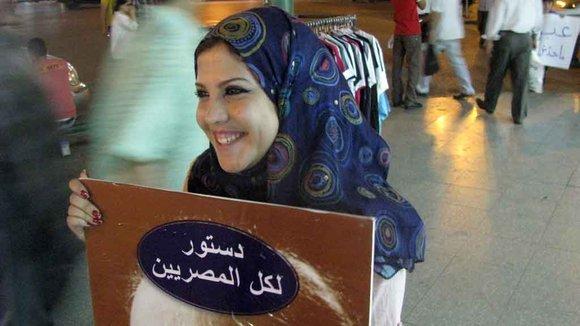 "A constitution for all Egyptians!" – Debate over the drafting of a new constitution is raging in the nation on the Nile following Muslim Brotherhood demands that greater consideration should be given to religion and most recently, a Supreme Military Council power grab securing veto rights for the new constitution

​​This means any proposed legislation targeting the equality of the sexes in inheritance law is rejected as unconstitutional, as it would infringe the Sharia code. On the other hand, as far as the question of Islamic dress code is concerned, the constitutional court decided that regulations would depend on time and place. This meant that an order introduced by the education minister banning female students from wearing the niqab was declared by the court to be constitutional.

After the revolution in Tunisia, debate raged over the secular character of the new constitution. Where is this debate heading?

Gallala-Arndt: The debate over Sharia as legislative resource was triggered when Ennahda accepted that this is not enshrined in the constitution as such. This means that Article 1 of the constitution in its current form stays as it is. This purely states that Islam is the religion of the state. So Sharia is not actually mentioned in the Tunisian constitution.

Unlike Tunisia, Libya does not have a reference framework for the drawing up of a constitution, political parties and NGOs are virtually non-existent. Can Tunisia serve as a model here?

Gallala-Arndt: Yes it can. One example of this is how electoral lists are drawn up. Regulations stipulate a strict parity of the sexes: man, woman, man, woman. The Libyans adopted this concept from the Tunisians. Another example: In Tunisia a female friend of mine, who is a professor of law, stood for election, was able to gather experience as a woman during the election campaign and now works as a consultant for the "United Nations Development Programme" (UNDP). She organises workshops and awareness campaigns for women who want to stand for election in Libya, giving them targeted advice on how to assert themselves as women and communicate effectively with people. 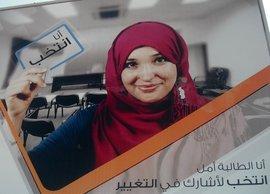 Learning from the Tunisian example: Following the dark decades of the Gaddafi dictatorship, the first free elections are taking place in Libya on 7 July 2012. Deputies in the national assembly must then hammer out a new constitution for the nation and appoint a new transitional government

​​As a neighbouring country, Tunisia can certainly serve as a model, but one must also consider the special qualities of Libyan society. This is a society that as a result of Gaddafi's reign of terror suffers from an acute lack of institutions as well any kind of culture of political debate. But there's also a highly educated youth and an elite that wants this change. That's why I'm quite confident about Libya.

The Turkish AKP is often touted as an example of how democracy and Islam can be compatible. Is this an accurate appraisal?

Gallala-Arndt: Yes, absolutely. Turkey has a long tradition of secularism that we don't have. The wife of President Abdullah Gül wears a headscarf and is a Muslim, but this doesn't have any impact on politics, human rights or other religious minorities. It is definitely worthwhile to try and emulate Turkey, which serves as a good and highly inspiring example.

In Egypt Nobel Peace laureate Mohammed ElBaradei is calling for the new constitution to be based on German basic law, in particular with regard to the anchoring of fundamental rights such as freedom of expression and freedom of religion. Is it possible to simply transfer such a model?

Gallala-Arndt: I don't believe that in the present situation, fundamental rights such as they exist in Germany will also be anchored in this form in the Egyptian constitution. Whether we want it or not, this will be a constitution with many compromises. Secular forces must also accept that Islamic influence will resound through it. The Muslim Brotherhood has a parliamentary majority, and this is a very religious society.

What dangers does the process of democratisation present to Arab Spring nations?

Gallala-Arndt: The Islamists can be democratic. But as far as I see it, there is a danger that once they are in power, they could move to restrict human rights or women's rights in particular. But nevertheless I'm not assuming that this will become an urgent problem at the present time. The current situation in Tunisia and also in Egypt is so complicated that there's a great need for consensus solutions. Political actors must first address economic problems and to this end, are forced to make compromises.

I think that even though the situation for religious minorities and women may not improve, at least it won't get any worse. Consensus is also sought on these issues. Whether or not Arab Islamists can behave in a democratic fashion, also within their own parties, we'll just have to wait and see.

Legal expert Dr. Imen Gallala-Arndt was born in Kairouan in Tunisia in 1975, and studied in Tunis and Heidelberg. The key focus areas of her research are international and national civil law as well as the family and inheritance laws of Jewish and Christian communities in Islamic nations. She is currently working in Hamburg as a consultant for a Max Planck research group examining family and inheritance laws in Islamic countries.

Home
Print
Newsletter
More on this topic
Political Models after the Arab Revolutions: Islam, Sharia, and DemocracyTunisia after the Elections: Ennahda and the Challenges of DemocracyInterview with Ralf Melzer: ''In Libya, the Transition Will Be Harder''
Related Topics
All Topics
Date:
Mail:
Send via mail

END_OF_DOCUMENT_TOKEN_TO_BE_REPLACED
Social media
and networks
Subscribe to our
newsletter