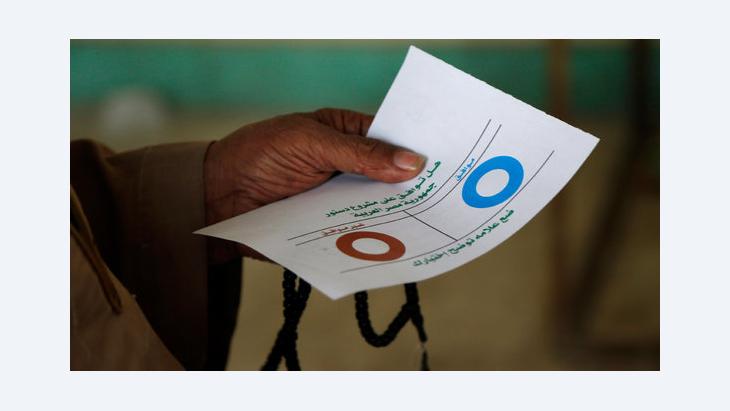 ﻿Although a slim majority of votes cast in Saturday's first round support the new constitution, the Islamists have little reason to celebrate: only 18 percent of the electorate voted for the blueprint, as the Muslim Brotherhood's popularity continues on its downward trajectory. Commentary by Karim El-Gawhary

﻿It is correct to say that the Muslim Brotherhood and the Salafists have won the first round of the referendum on the constitution. More than 56 percent voted in favour of the controversial blueprint, and 43.5 percent against. Voter participation was a lacklustre 33 percent.

Expressed another way: only a third of all Egyptians who were entitled to vote did so, and slightly more than half of those voted in favour of the constitution. What does this mean for the legitimacy of a constitution with which an entire nation should really identify, if just 18 percent of the electorate agrees with it?

For Egypt's Islamists, the result is little cause for celebration. It is surprisingly weak. And this despite the Muslim Brotherhood's massive efforts at mobilising support, a campaign that is taking them to the remotest Egyptian village, and despite the Salafist sheikhs holding sermons in the mosques of deprived areas branding opponents of the constitution "infidels". 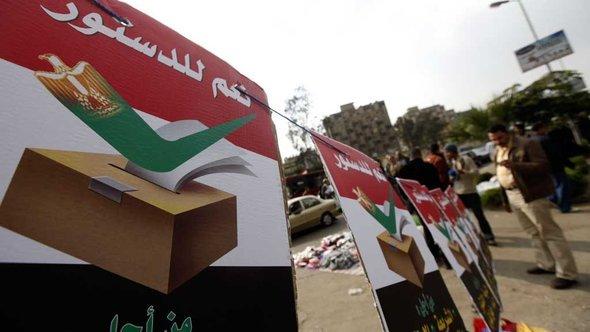 "Yes to the constitution": Despite the Muslim Brotherhood's massive mobilisation campaign, which is reaching the remotest Egyptian village, and despite the Salafist sheikhs, the result is surprisingly weak, says Karim El-Gawhary

​​The "No" camp, on the other hand, has no campaign machinery and no mosques. The disorganised opponents' camp decided only a few days ago not to boycott the poll, but to cast a "No" vote. By then, members of the Muslim Brotherhood had been going from house to house for almost two weeks, trying to persuade people to vote "Yes".

Proponents of the constitution devoted all the resources at their disposal to the campaign. It was run under the slogan: "With the constitution, the wheel that is Egypt will at last begin to turn again". This was a clever way of appealing to all those less concerned with the content of the constitution to simply vote "yes" so that the nation can continue to make progress. "I'm voting in favour so that I get a job again," was one of the many sentences uttered at polling stations in Cairo on Saturday. Few of those quoted were able to say anything concrete about the content of the draft constitution.

Conversely, this also means that 43 percent of Egyptians voted against the draft constitution, in the full knowledge that voting "No" would put the process back to square one and perpetuate the nation's political stagnation. The question of their country's future foundation was simply too important for them. This shows just how much Egyptians have matured politically over the past two years.

Yes, it would appear that the Islamists will manage to push their draft constitution through, but their popularity is clearly on the decline. In the first parliamentary elections, the Muslim Brotherhood and the Salafists still held onto 69 percent of seats. 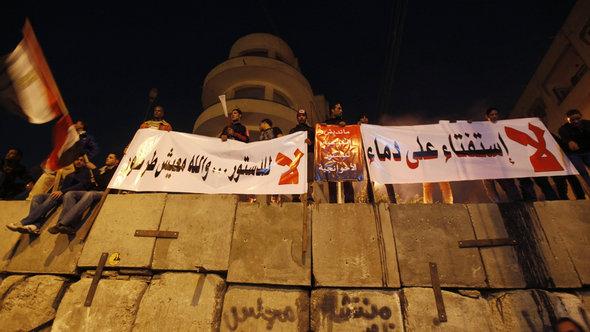 Social division: While the draft constitution was approved in eight out of 10 provinces, most people in the capital Cairo voted "No". A slim majority voted against the draft in the province of Gharbija, which is also the location of the industrial town of Mahalla, a traditional opposition stronghold

​​The Muslim Brotherhood's President Mohammed Morsi was elected to his post by just over a quarter of the vote. And now just 18 percent of the electorate has voted in favour of the draft.

Following initial representation on a parliamentary level and now with the presidency, the Muslim Brotherhood has been in power for just a year. What will happen at the next parliamentary poll, which must take place 60 days after the constitution has been formally adopted?

If the liberal camp can close ranks and organise itself in a sensible fashion, then the Islamists in Egypt could be defeated at the ballot box for the first time. This is the most important lesson of this constitutional referendum, which goes into its second round this coming Saturday.

Within a two-year period, Mubarak has been removed from office, representatives of the old regime have been rendered almost powerless in elections, and the military despatched into political retirement. And now, the Islamists have experienced their slimmest electoral win to date and must expect to fact a serious challenge at the ballot box the next time around.

Egypt's process of democratisation and its political and social opening are progressing in great strides. Much faster than some European prophets of doom would like – and it's likely that they will now start ranting again about an "Arab Winter" and an Islamist takeover.

Germany's foreign policy is explicitly values-based. But what happens, Ralf Bosen asks, when democracy, the rule of law and human rights collide with the logic of trade and ... END_OF_DOCUMENT_TOKEN_TO_BE_REPLACED

"The people aren’t ready for democracy" has been the constitutional basis for Arab tyranny, its favourite slogan and its sacred narrative for more than a century. Yet, asks Khaled ... END_OF_DOCUMENT_TOKEN_TO_BE_REPLACED

A new global database shows a significant gap in reported COVID-related deaths, suggesting the actual worldwide death toll is short by at least 1 million. That's due in part to ... END_OF_DOCUMENT_TOKEN_TO_BE_REPLACED

Two decades after the attacks of 11 September 2001, the West faces the shattered debris of its failure – not only in Afghanistan, but also in Iraq, Syria, Libya and Yemen. What ... END_OF_DOCUMENT_TOKEN_TO_BE_REPLACED

The coronavirus pandemic has turned lives upside down all over the world. In the Middle Ages, however, people lived with epidemics all the time. The best and most famous ... END_OF_DOCUMENT_TOKEN_TO_BE_REPLACED

In Ancient Egypt, the pharaohs had "solar boats" built to take them into the afterlife. One of these boats was discovered in 1954. It has now been moved to the Grand Egyptian ... END_OF_DOCUMENT_TOKEN_TO_BE_REPLACED
Author:
Karim El-Gawhary
Date:
Mail:
Send via mail

END_OF_DOCUMENT_TOKEN_TO_BE_REPLACED
Social media
and networks
Subscribe to our
newsletter