"The Malady of Islam" made Abdelwahab Meddeb famous overnight, a scathing critique of the current state of Islamic thought. Now his "counter-sermons" have appeared. Ludwig Ammann has read them 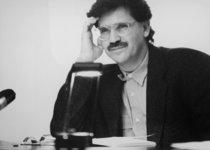 ​​Abdelwahab Meddeb's "counter-sermons" are made up of 115 brief radio essays from 2003 to 2006 in which the French-Tunisian thinker presented weekly commentary on a cultural or political event, from the death of Derrida to the war in Iraq, on Medi 1 in Tangiers.

They are pedagogic lectures in the best sense of the word, combating the demon of a puritanical Islamicism that seeks salvation in xenophobic isolation and preaches the battle against supposedly "un-Islamic" innovations on every channel.

In contrast, as a passionate cosmopolitan and Maghreb who is the product of both western and eastern education, Meddeb sets his hopes on learning about the other, and above all – making it easier for his North African countrymen to escape their self-imposed ignorance – on learning about another Islam, namely the bold and unfortunately forgotten innovations of past times that anticipate a liberal understanding of Islam.

​​An especially striking example graces the cover: the first visual representation of the prophet in a chronicle which a recently-converted Mongol sultan commissioned around 1300 from his vizier, a converted Jew. What a boon it is when the evocation of a great moment of progress in the Islamic tradition deflates the chatter of the indoctrinated Wahhabite guardians of public morals who would love to stop the march of time!

With the same pugnacity Meddeb campaigns for women's right to act as prayer leaders, as Amina Wudud does in New York, sparking a howl of outrage in the Arab world. He does so by citing the great Sufi thinker Ibn Arabi (d. 1240), who had good arguments for considering it permissible.

Apart from that he advises women, plain and simple, to burn their veils and reject the Koran's patriarchal precepts regarding the relationship of the sexes; according to him it is the only way they can truly remain loyal to their faith while being modern at the same time.

And of course Islam must learn to accept the fact that Algerians and Moroccans, for instance, renounce their faith under the influence of evangelical preachers. Perhaps, Meddeb suggests, Islam would emerge strengthened by the test if its adherents were able to choose their faith of their own free will.

"Everything sets me apart from Tariq Ramadan," Meddeb announces in the 84th counter-sermon. But there is one point of agreement with his antipode: "The attack on taboos is the key to reform which Islam needs, the key the ulemas never dared to turn."

And that is why he, in contrast to the outraged French public, recognizes how effective Ramadan's demand for a moratorium on corporal punishment is in the countries of origin: because it is none other than Tariq Ramadan – the grandson of Hassan al-Banna, a founding father of Islamicism – who is vigorously encroaching on the untouchable and agitating the "worm-eaten councils of Cairo".

It is this power of judgment, uncorrupted by intellectual fashions, that makes Meddeb's constructive criticism of Islam stand out from the masse of well-meant, but poorly thought-out analyses. To pick up on one of the author's thoughts, perhaps it is in fact the "strangers" – more precisely: the spirits at home in more than one tradition – the Meddebs as well as the Ramadans, who can release contemporary Islam from its childishly defiant paralysis.

This article has previously been published in the Swiss daily, Neue Zürcher Zeitung.

Interview with Abdelwahab Meddeb
In Search of the "Greek" Dimension of Islam
Abdelwahab Meddeb is one of North Africa's most important contemporary thinkers. Meddeb talked to Beat Stauffer in Tunis about the maladies of Islam and his own confession to an open, humanist Islam

Interview with Muhammad Shahrur
"We Urgently Need Religious Reforms"
The moderate Islamic thinker Muhammad Shahrur's contemporary interpretation of the Koran has attracted a lot of attention. In an interview with Ahmad Hissou, he calls for a religious reform of Islam, which he considers even more important than political reforms

END_OF_DOCUMENT_TOKEN_TO_BE_REPLACED
Social media
and networks
Subscribe to our
newsletter